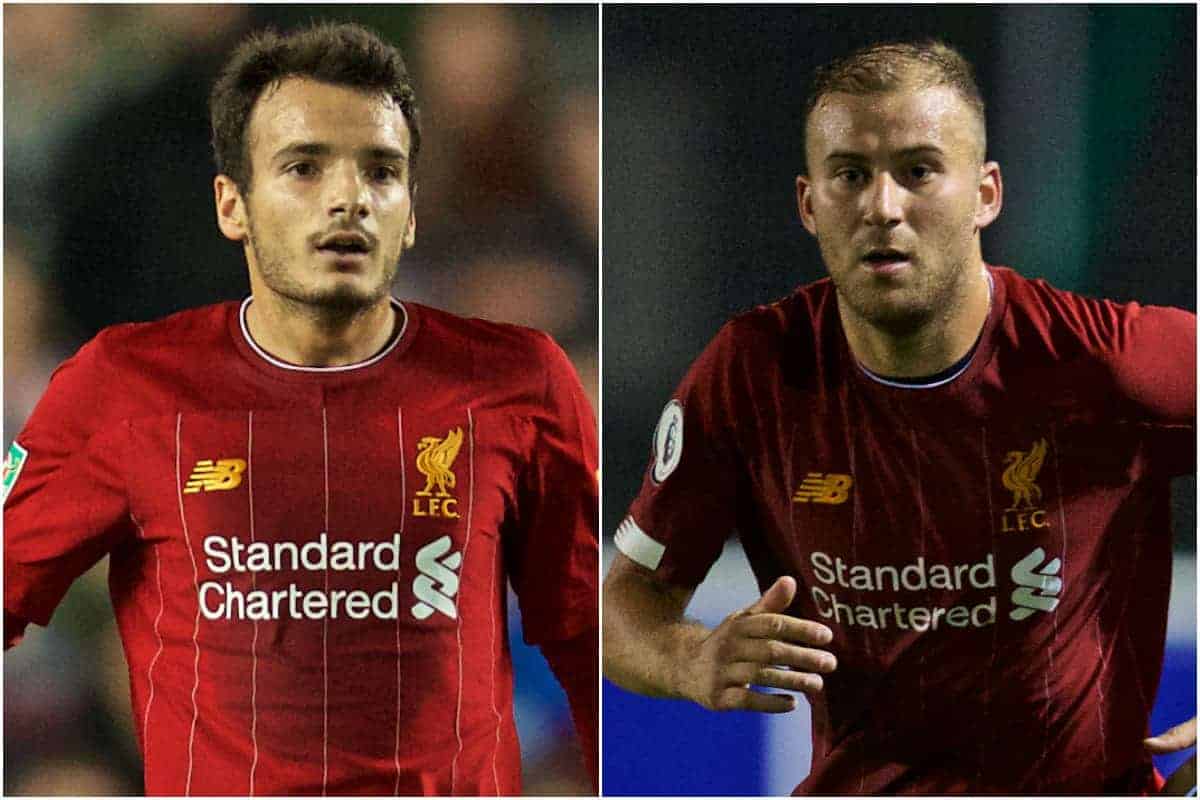 There is real mystery over how Liverpool will line up for their League Cup quarter-final at Aston Villa, but it is now possible to predict the side.

Neil Critchley will be in the dugout on Tuesday night, not Jurgen Klopp, with the under-23s coach supported by Alex Inglethorpe, Barry Lewtas and Vitor Matos, among others.

He faces a difficult task as he takes an academy side to face Villa’s first team, and with a place in the semi-finals at stake there is no chance Dean Smith will take the game lightly.

It is a rare night in which the Reds are expected to lose, with the senior squad already having departed for the Club World Cup, but Critchley’s priority is for his side to “play like a Liverpool team.”

Given the ethos of the club runs from first team to academy, and Critchley works with the players he will call upon on a daily basis, this should be the case.

But how will Liverpool line up as they bid for an unlikely triumph?

The obvious team news ahead of the trip to Villa Park is that no senior player will be involved.

Klopp flew out to Qatar with a 20-man squad on Sunday morning, with only Fabinho, Joel Matip and Dejan Lovren missing for the Club World Cup due to injury.

This included both Neco Williams and Curtis Jones, with the teenagers therefore unavailable for the League Cup.

But there are further fitness issues Critchley will be required to contend with as he plots a side for the quarter-final.

The biggest concern comes with Rhian Brewster, who the manager explained is “doubtful” due to an ankle injury suffered in training, and given he has not played at any level since November 10, it seems likely he will miss out.

Yasser Larouci is another doubt, having not featured since taking a blow during the under-19s’ 7-0 win over Napoli in the UEFA Youth League on November 27.

And Layton Stewart was taken off at half-time after landing awkwardly in the U23s’ 1-1 draw with Chelsea on Saturday, which could see the 17-year-old ruled out too.

Who Could be Involved

Critchley’s side for the weekend clash with Chelsea gave an indication of those who should be involved on Tuesday night.

Meanwhile Caoimhin Kelleher was with the first team for the 2-0 win over Watford, but is not part of the squad in Doha this week.

It is likely they will form the core of Critchley’s starting lineup, with the remainder dependant on whether the likes of Larouci and Brewster are passed fit.

Elijah Dixon-Bonner is Liverpool’s most-used academy player so far this season, and wore the captain’s armband in the absence of Chirivella in the EFL Trophy clashes with Fleetwood and Accrington Stanley, which could see him trusted.

U18s midfielders Jake Cain and Leighton Clarkson have both trained with the first team of late, and would provide much-needed end product, having contributed 29 goals and assists between them this campaign.

The likes of Ben Winterbottom, Tom Clayton, Jack Bearne, Dal Varesanovic and Tom Hill could be considered to flesh out the squad further.

There are few certainties in predicting Critchley’s starting lineup at Villa Park, but one of those should be Kelleher taking his place between the sticks.

The Irishman has already served as Liverpool’s League Cup goalkeeper in the last two rounds, and this will be an altogether different challenge as, at 21, he will be one of the oldest players in the side.

Ahead of Kelleher, both Hoever and Van den Berg should start before flying out to Qatar later in the week, but their positioning depends on the fitness of Larouci.

If he is unavailable, Hoever will likely start at right-back, with Van den Berg instead partnered by Boyes—Wales under-19s captain and regular for the Reds’ U23s—while Gallacher could assumed duties at left-back.

In midfield, Chirivella should wear the captain’s armband in the No. 6 role, and could be flanked by Kane and Dixon-Bonner—whose inclusion may be determined by Brewster’s role.

Without Brewster, and with Stewart a doubt too, Critchley could turn to Christie-Davies to either lead the line or start on the left, with Longstaff and Elliott completing the front three: 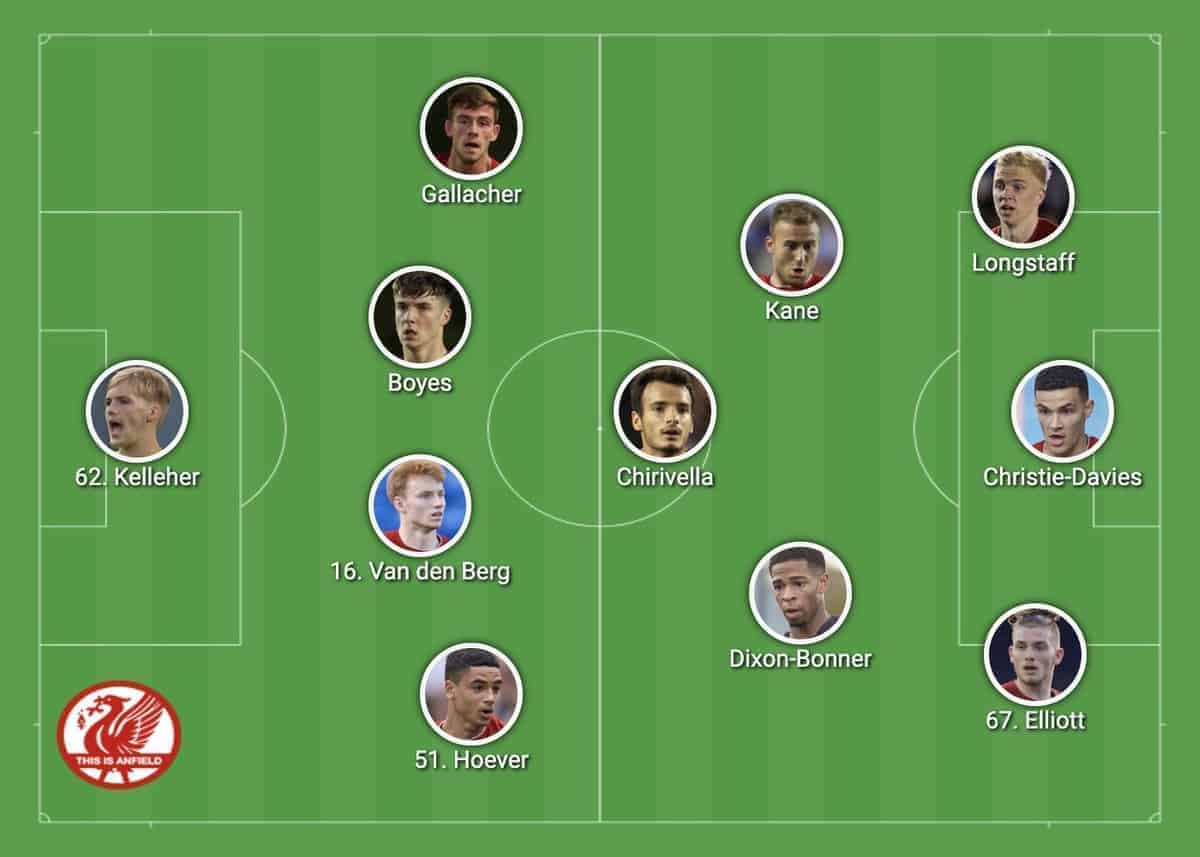 If Larouci and Brewster are fit, however, the young Reds could take to the field as a considerably stronger unit, with most already boasting first-team experience.

Kelleher could then marshal a back four of Gallacher, Hoever, Van den Berg and Larouci, allowing the Dutch duo to start alongside each other at centre-back.

And Chirivella and Kane could then be joined by Christie-Davies in his natural midfield role, at the expense of Dixon-Bonner, who played the full 90 minutes for the U23s against Chelsea.

This would allow Elliott and Longstaff to flank Brewster in attack, which would be a big test for the 19-year-old ahead of a January loan move to the Championship: 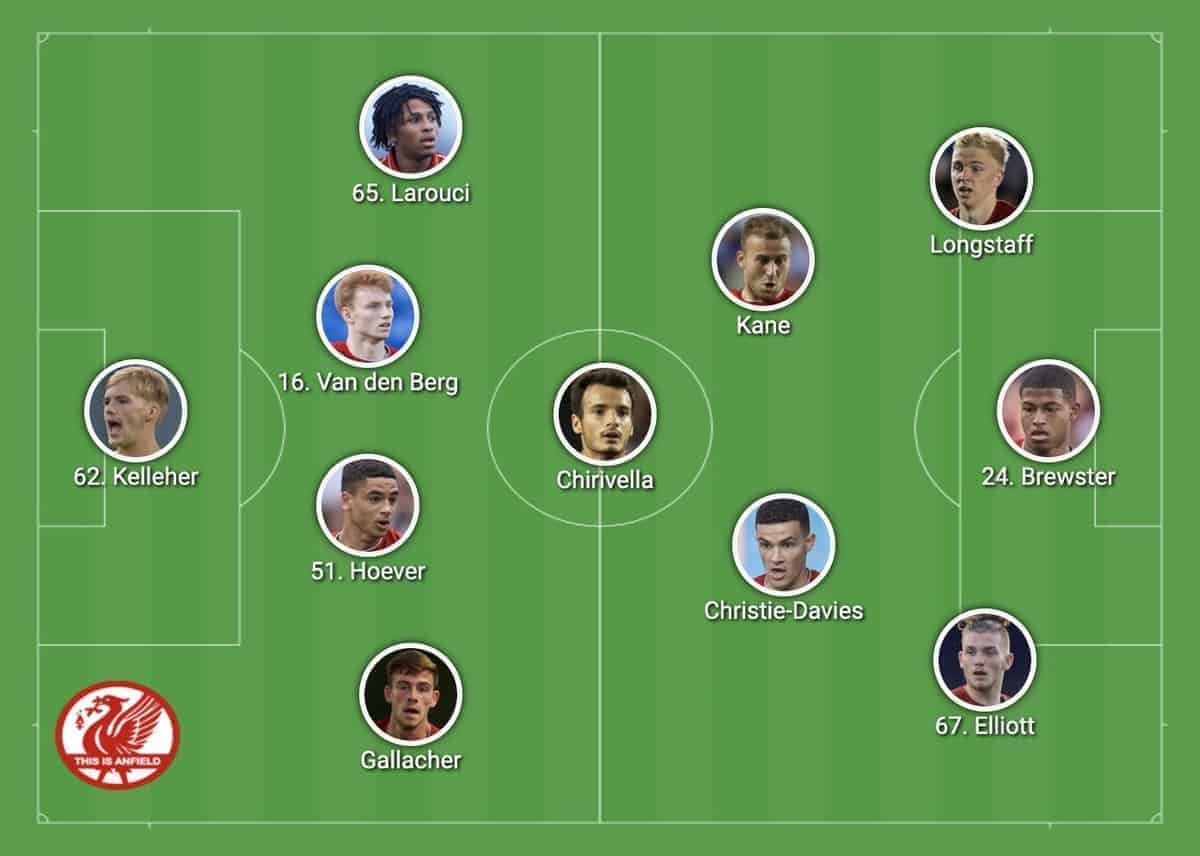 Against a Villa side likely to take a physical approach, this will undoubtedly be a tough night for Liverpool that could see them lose heavily if they don’t settle quickly.

But a strong midfield including Eredivisie alumni Chirivella and the League One Team of the Season’s Kane, plus top prospects such as Kelleher, Hoever and Elliott, could see them spring a surprise on their hosts.