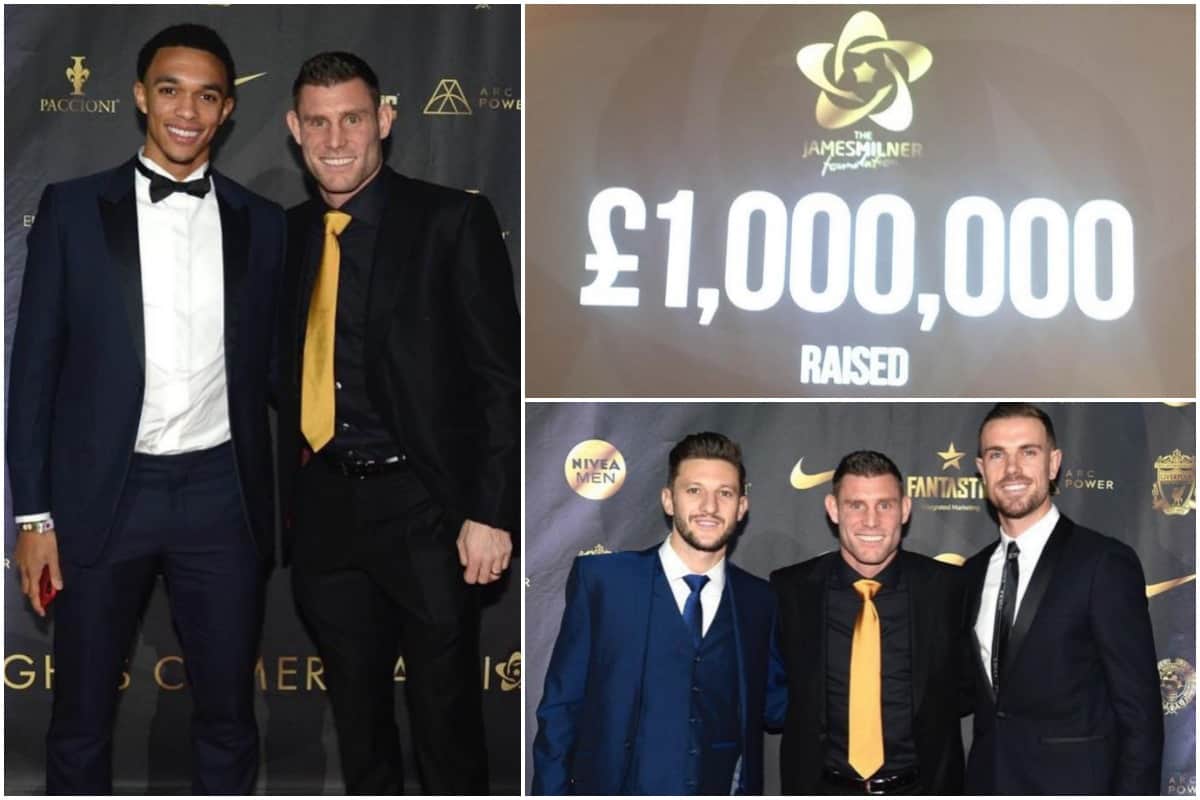 James Milner established the foundation (JMF) to promote and assist the advancement of education of healthy recreation for young people in the United Kingdom.

The organisation also uses the funds raised to help national charities such as Bloodwise, MNDA, NSPCC and Help for Heroes.

And on Sunday evening, ‘A Night in Hollywood’ event was held in Manchester for their eighth annual charity ball, where the foundation celebrated as they amassed over £1 million in raised funds.

The night saw a host of Liverpool faces show their support, as Jurgen Klopp, Trent Alexander-Arnold, Alex Oxlade-Chamberlain, Jordan Henderson and Adam Lallana were all present alongside Milner.

Over 900 guests were in attendance as various auctions and raffles took place, which included a round of golf with Lallana and Milner, a game of paddle tennis with Klopp and a meet and greet with Little Mix.

After the event, Milner shared his gratitude for being able to mark the occasion with a memorable milestone, as he said: “What a night. Over £1m raised for the James Milner Foundation. Massive thanks to everyone involved in making this happen.”

What a night ?? Over £1m raised for the @thejamesmilnerfoundation Massive thanks to everyone involved in making this happen ??

Thanks to everyone at the #jmfcharityball. With all of your support we’ve hit the £1,000,000 raised mark?

A post shared by The James Milner Foundation (@thejamesmilnerfoundation) on Dec 1, 2019 at 3:03pm PST

Henderson, Robertson and Oxlade-Chamberlain were also on hand to commend the effort of “reaching the £1m mark for some incredible charities” as they each lauded Liverpool’s No. 7 and the foundation for their tireless work:

Huge congratulations to Mr and Mrs Milner on their 8th successful charity ball, and most importantly for reaching the £1m mark for some incredible charities. ??

Suited & booted for @thejamesmilnerfoundation charity ball last night. So much money was raised, all going to great causes. Great night all round ?

We scrub up all right! Great night at the @thejamesmilnerfoundation last night. So much money raised for a fantastic cause!

Milner’s fellow Leeds natives in the Kaiser Chiefs headlined the night’s entertainment as the foundation and all involved celebrated a remarkable milestone on Sunday evening.

And it was a welcome sight to see Liverpool players past and present and a host of Milner’s former teammates turn out for a brilliant cause.