The Merseyside rivals faced off for the 234th time in history and Jurgen Klopp‘s side produced a superb performance.

Michael Keane pulled one back, Origi added another and Mane also got in on the act, before Richarlison headed home seconds before half-time.

Gini Wijnaldum scored the only goal of the second half, finishing in front of the Kop to complete a memorable victory for Liverpool.

It means they remain eight points clear of Leicester at the top of the Premier League, as well as 11 ahead of Man City. 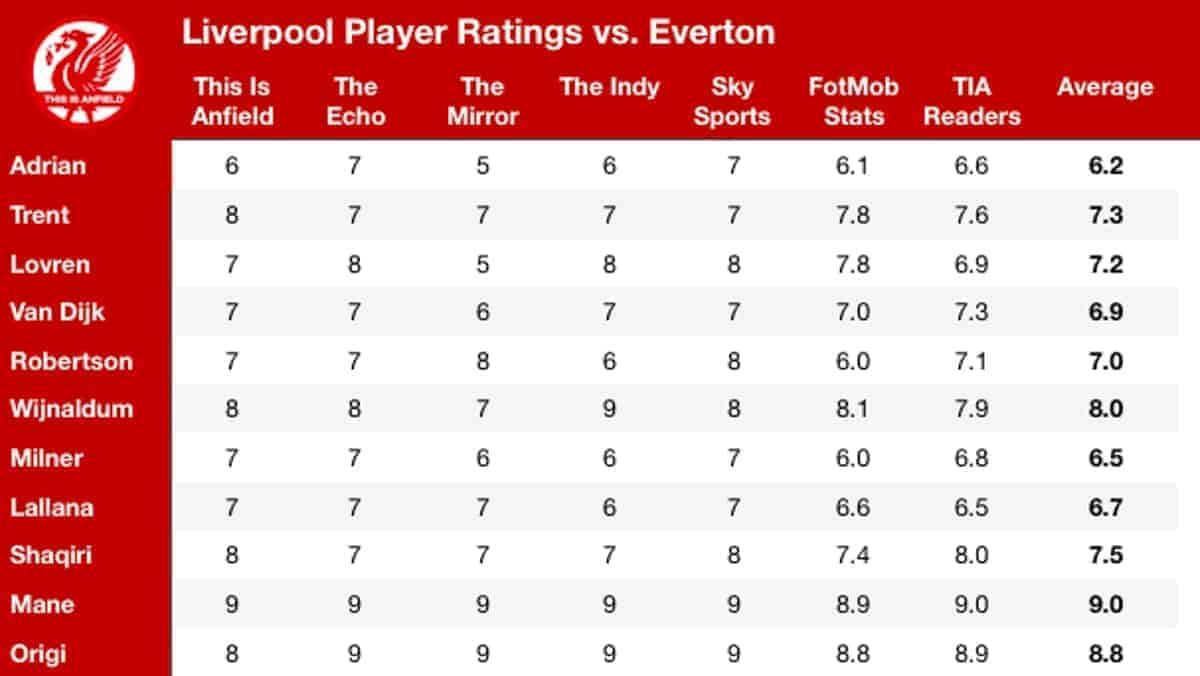 Mane (9.0) received one of the highest average ratings of the season, on a night when he again showed why he is one of the world’s best players.

With Mohamed Salah and Roberto Firmino on the substitutes’ bench, the 27-year-old was unplayable without his fellow front-three destroyers alongside him.

This is Anfield’s Henry Jackson described Mane’s assist for Origi as “stunning,” while Ian Doyle of the Echo felt he “absolutely terrorised Everton.”

Next up was Origi (8.8), who scored his fourth and fifth goals against Everton, who must be sick of the sight of him.

The Mirror‘s David Maddock hailed the Belgian’s “incredible” touch leading up to his second goals of the match—a moment that had echoes of Daniel Sturridge‘s against the Blues back in 2014.

Jackson thought Origi “justified the faith Klopp showed in him,” with both Salah and Firmino’s absence essentially going unnoticed.

In third place was Wijnaldum (8.0), who was a ferocious figure in the midfield, coupling a relentless work ethic with intelligent use of the ball.

Adrian (6.2) was the lowest-rated Liverpool player—he only really had to pick the ball out of the net twice, on an otherwise quiet evening.

Next up for Liverpool is a trip to Bournemouth on Saturday afternoon, with Alisson expected to be among those to return as Klopp rings the changes again.