The Reds took to the field for the 234th derby with a heavily changed setup, as Klopp opted for five alterations including starts for recent unlikely heroes in Adrian, Adam Lallana, Xherdan Shaqiri and Divock Origi.

Tactically they began in a 4-2-3-1, and just over a year on from his late, late goal in the same fixture, Origi got off the mark within six minutes of kickoff, latching onto Sadio Mane‘s through ball and finishing an emphatic counter.

Choruses of “Merry Christmas, Everton” echoed around Anfield, greeting a visiting side who started and finished the game in the relegation zone, by virtue of Southampton‘s win over Norwich.

The momentum took Liverpool on, as a remarkable raking pass from Trent Alexander-Arnold found Mane on the left flank, and the in-form Senegalese produced another stunning assist for Shaqiri to make it 2-0. 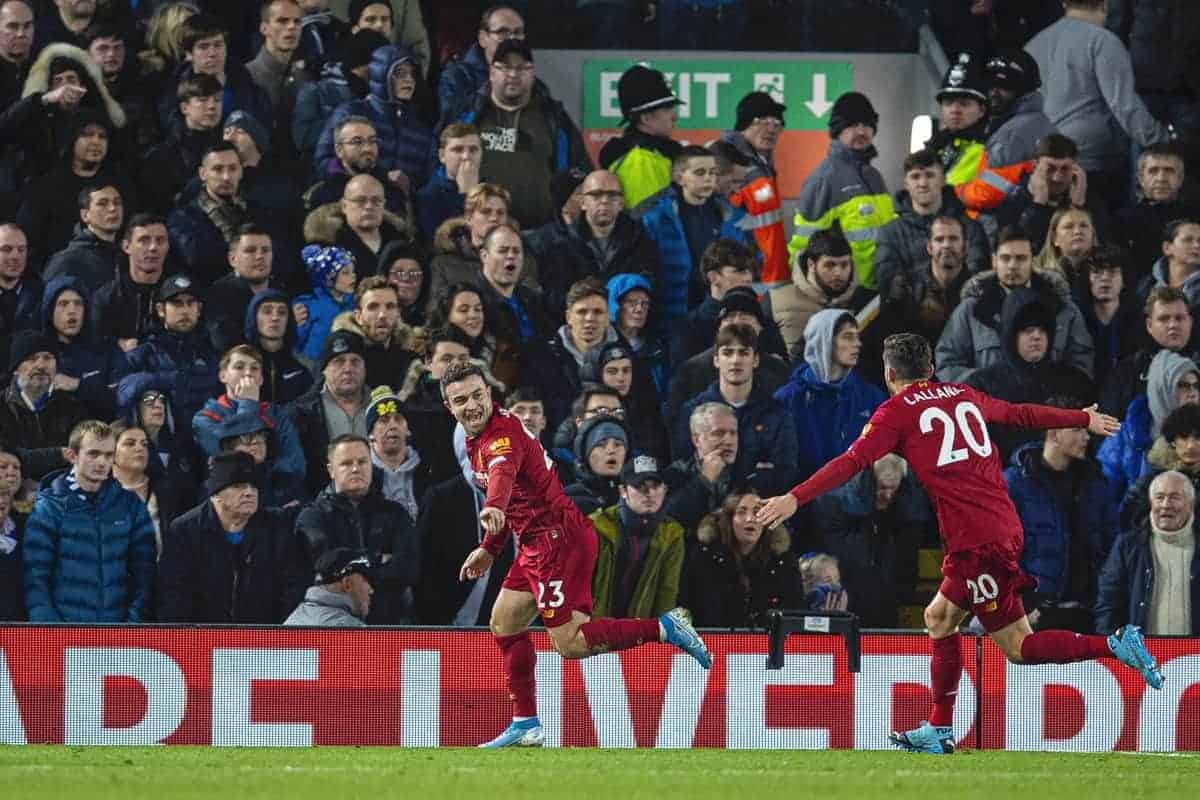 However, as per the terms of the campaign there was to be no clean sheet, and a defensive mixup allowed Michael Keane to reduce the deficit in a game bubbling over with emotion.

A series of late challenges and off-ball flareups threatened to see the derby descend into chaos, but a moment of pure quality established the side in control: Dejan Lovren with an exceptional long pass, Origi with a fine second goal.

That wasn’t it for the first half, as a blistering break saw Mane and Alexander-Arnold combine, and the forward produced a sumptuous finish from the edge of the area, only for Richarlison to cancel it out to cap a breakneck opening 45.

Everton‘s formational switch from a 3-4-3 to a 4-4-2 did little to change Liverpool’s approach, and after the break they were as persistent as ever in their drive forward.

While Shaqiri appeared to have not lost a step during his long spell out, Lallana at times lacked the urgency and crispness required in his advanced role in attack, with the Englishman perhaps now better suited as a deep-lying option.

Mane, meanwhile, was in world-class form, but a blot emerged on his copybook when, running onto a long ball from substitute Jordan Henderson, he contrived to send his shot wide as a double-brace of goals and assists eluded him.

It matter little when Gini Wijnaldum made it 5-2 after a tantalising show of skill from Roberto Firmino, rubber-stamping the three points.

Liverpool top of the league, Everton in the bottom three.