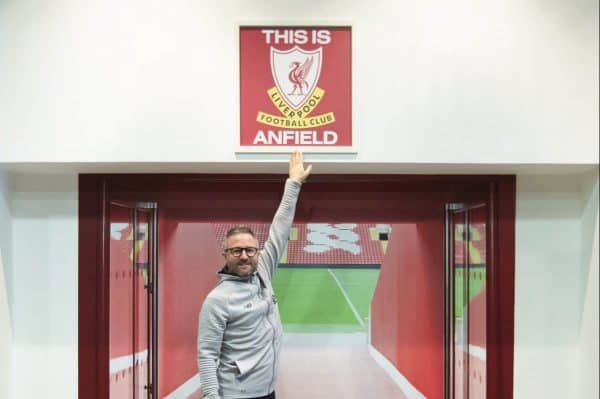 The first official Liverpool FC store in the Middle East recently opened in the biggest shopping mall in the world. We spoke to its founder for how it came about.

Craig McKelvie (pictured above) is a Liverpool fan who has turned his passion for the Reds into a business, opening an official club store in Dubai last month, here, he tells his story of how it came about.

I’m actually from Manchester… so it was tough growing up and going through those school years there!

I started supporting the Reds after the 1989 FA Cup Final, my Gran asked my brother (four years younger) to choose a team, Red or Blue, the winner won 50 pence, I chose Red and the rest you can say is history.

I’ve never looked and back and it’s led to me opening the first stand-alone Liverpool FC store in the biggest Mall in the world, The Dubai Mall.

Part of this is also that biggest impact on my life was my Gran in so many ways – you could say that if that had never happened back then, I wouldn’t be opening the first Liverpool Store in the Middle East.

How it all began…

I had made a decision to start a memorabilia business here in Dubai as no one else was doing it, and if they were it was not at a level I wanted to do it at. The potential out in the Middle East is unknown as everyone is crazy for football.

I had a meeting with Virgin Megastores who loved the idea of having a Mohamed Salah signed shirt in a frame for them to showcase to their customers and it took off from there.

I set up ‘The Bootroom Collection‘ along with the ‘Official LFC Store‘, we’re now retailing in five countries within the middle east and in 2020 we plan to have our own shop within the Virgin stores.

The Bootroom Collection really brings fans closer to their heroes, some people may never get to meet Steven Gerrard or Salah, so a signed shirt, boot or ball allows them to get a little closer.

Mixing it with the players?

So far I haven’t met any of the big stars, although it wasn’t my intention to set it up for that, its more about the customer and their experience with the brand.

I did, though, have an opportunity to work with the Liverpool team for a couple of years whilst I was working at Harvey Nichols back in Manchester. The players liked to have a few pieces from Harvey Nichols as we did a lot of luxury items and only down the M56 so was easy to put a selection of products together and take it to them.

I was allowed into Melwood with the Player Liaison team to present a few items to the lads after training.

It can only be described as a dream, it was surreal, I was standing in the inner sanctum of the club I have loved all my life watching the first team and managers passing by the room I was in and every now and again a player comes in and takes a few items says hello and leaves – and pays of course!

It was an amazing period of my career to be given that type of access to the players.

Making the LFC Store in Dubai

I approached the club about a smaller project I wanted to do in the Middle East but the project didn’t take off and was placed on hold. Then I received a call to meet to discuss other avenues and we agreed to look at a store.

I have to say, it all happened in the blink of an eye, it was like all the stars had aligned and someone was looking over me and made it happened. We agreed a deal and opened the store within 10 days.

It was one of the best feelings I have ever had opening the doors that Friday morning, I felt we had achieved what we set out to achieve and committed to deliver the Liverpool commercial team, we brought a little bit of Anfield to Dubai. #BringingAnfieldToDubai

It’s been so well received so far, people stop and look in, then the phones are out taking pictures selfies and then coming in to see what we have to offer, no one walks out without a piece of LFC.

The feedback has been outstanding and couldn’t have asked for better, that’s what its all about. It’s all about how the fans feel, and if we can do that each time a fan walks into the store, it’s humbling for me to hear that as it was the dream to create it for the fans.

We have had customers from all over the world, such a melting pot but all with one thing in common, we are Liverpool fans.

We had a fan from Korea who bought a signed Stevie Gerrard Shirt and we shipped it to him.

We have fans visiting from all over the Middle East, Saudi Arabia, Kuwait, Bahrain, Oman, Qatar.

In January we will be officially opening the store with an ex-player and the Champions League trophy in store.

We also have a replica ‘This Is Anfield’ sign in the store, so there’s been plenty of selfies and photos there.

I believe we, as the retailer, should support the club by being able to offer that same intensity and passion we see week in week from the Jurgen Klopp‘s team. We need to make sure the fans that come to our store are offered a great experience like the players show them on the pitch, that’s how I see my role within this partnership.

We have to offer the very best service, the best experience, the best range of product, if we can’t offer that we are not matching what the club is achieving on the pitch and would say we are not the right partner.

I’m a little superstitious so haven’t spoke about the potential of winning the league this season, so I’ll hold my thoughts on it for now. It’s going to be an amazing second half to the season I’m sure of that!

* Thanks to Craig for sharing his story, you can follow him and the LFC Dubai club store on Instagram @lfcretailuae. The official LFC store website in the UAE is: LFCRetailUAE.