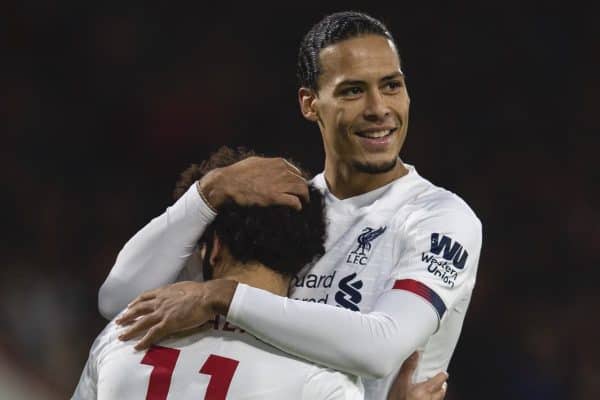 Virgil van Dijk was back in training on Friday morning, after a bout of illness ruled the centre-back out of the Club World Cup semi-final.

Van Dijk was absent from Wednesday evening’s clash with Monterrey, which prompted Jordan Henderson to start alongside Joe Gomez in defence.

With Joel Matip, Dejan Lovren and Fabinho already ruled out and neither Ki-Jana Hoever or Sepp van den Berg having yet made the trip to Qatar, it was an enforced experiment by Jurgen Klopp.

But the back line is likely to be more settled for this weekend’s final against Flamengo, with Gini Wijnaldum the only player to miss the latest session.

After being welcomed to Doha by heavy rain, the Reds were able to train in the warm weather more closely associated with the Middle East, and spirits were high in training.

Van den Berg, who turned 18 on Friday, was greeted by a chorus of Happy Birthday, sung in the native language of each of his team-mates.

It would be the perfect gift for the teenager to be named in the squad for the final, though Van Dijk’s recovery and competition from Hoever and Neco Williams gives Klopp a difficult decision over which youngsters to include.

He is likely to make some changes from his side in midweek, however, with Roberto Firmino and Sadio Mane among those to start on the bench in the 2-1 win.

They, alongside with fellow substitute Trent Alexander-Arnold, should all return to the lineup against Flamengo, with Adam Lallana, Xherdan Shaqiri and Divock Origi potential candidates to drop out.

Klopp should give a more accurate insight into the fitness of his squad in his pre-match press conference, which will be held at the Khalifa International Stadium at 11am (GMT).