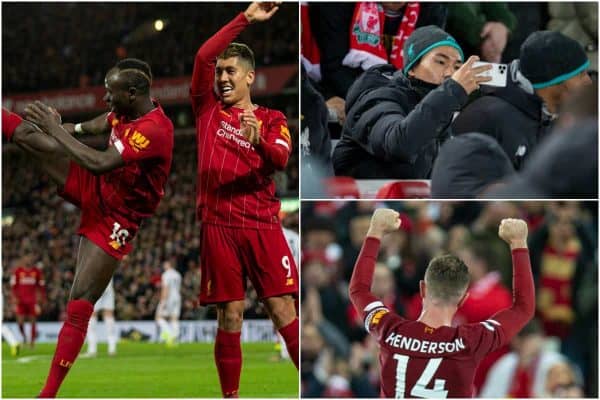 Liverpool eased to a 2-0 victory at home to Sheffield United, with plenty of positives on show at Anfield—attentions turn next to the FA Cup Merseyside derby.

The Reds were tipped to be given a stern test against the Blades but there was only ever one team in it.

Mohamed Salah converted an Andy Robertson cross to give the hosts the perfect start—his 14th goal of the season in all competitions.

With the scoreline a little precarious at 1-0, Sadio Mane added a second after the break, latching onto Salah’s pass before scoring from the rebound.

The win means Jurgen Klopp‘s side are 13 points ahead of Leicester with a game in hand, with 18 matches remaining in 2019/20.

Our ball retention was good, the rapid way we won it back every time was exceptional and the cohesion in the team was immaculate.

Jordan Henderson was fantastic, Joe Gomez was brilliant and the link-up play between Mane and Mo was very pleasing to see.

Overall, it was just the relentless nature of this 90 minutes which was the most impressive factor—work-rate on and off the ball, movement, total control all over.

It was important we scored early on, with little central creativity otherwise and Roberto Firmino not at his best, so not giving them a chance to get 15 men behind the ball at 0-0 for half an hour at a time was vital.

HENRY: This was a near-perfect night for the Reds, who were so in control from the first minute onwards.

I agree with Karl that the early goal was vital, because the Blades are the type of team who could have made life really awkward.

Henderson was outstanding in the middle of the park—he has never played better than this—but he wasn’t alone in standing out.

Gomez was immaculate at the back, showing that he is Virgil van Dijk‘s best long-term partner, and Gini Wijnaldum, Mane and Salah were great, too.

This even felt like quite an easy night in terms of running, which should keep legs fresh.

It seems that Salah is always much better when he gets an early confidence boost like that too, we’ve seen recently him miss a chance early on and then snatch at chances, whereas he was far more fluid after getting his goal early.

Gomez continues to improve alongside Van Dijk, while Henderson’s form since moving back to the No.6 again is absolutely incredible—he’s far, far better there now than previously.

I’ll note the Sheffield United fans for being one of the few who didn’t sing anti-Scouse songs or about poverty etc, just supported their team.

Also in the ‘good’ category for me was Chris Wilder post-match on us. He’s been a breath of fresh air this season.

KARL: Naby Keita‘s injury again. Hopefully it’s just a tweak off the shot rather than any real pull or tear.

We need him to get a consistent run because he’s fantastic once he gets going. Other than that, absolutely zero complaints about this game.

HENRY: As Karl says, the only genuine negative was Keita’s injury, on a night when Liverpool were so dominant.

It is so frustrating seeing him pick up yet another niggling issue—he just cannot get a run in the team, and has been in such promising form.

The injuries are starting to pile up a bit, which is a concern, but Klopp has built a squad that is excelling despite key players being sidelined.

MATT: We should probably praise Milner at this point for coming into the side and performing so well at such late notice, not even with a proper warm up.

Klopp seemed to suggest post-match that Keita could be out for a few weeks, which again puts him out until February like the rest of the injured ones at the moment.

We just need this next game out of the way and some breathing space with games roughly a week apart for a few weeks until the February ‘winter break’—by which point we should have Lovren, Matip, Fabinho and Ox back.

And the Everton team selection…

Xherdan Shaqiri in for Wijnaldum if he’s fit, pushing Curtis Jones into midfield.

It’s not as imperative to make loads of changes this time as we have a full week before the next game, but we’ve still got to get minutes for the squad players and ensure the key men are afforded a rest when the chance is there.

Get a few of the regulars on the bench, but a few in this side have had good performances recently and there’s a nice chance for Takumi Minamino to make his debut.

HENRY: It’s hard to have too many complaints with Karl’s team above—I certainly hope to see many changes made.

I know it’s Everton and I know we should want to win every competition, but let’s be honest, this is the game where a weaker team has to be fielded.

Granted, there is a break before the trip to Tottenham, but Klopp cannot afford to risk burnout with his most important players.

I would give Harvey Elliott a start, and give Henderson or Wijnaldum a rest, or both, while Minamino will surely make his debut.

If he plays anything like he did against Liverpool for Salzburg, Everton supporters could head home miserable once again!

MATT: It’s such a shame this Everton, because almost any other side and we’d be fine with massively rotating, but do we really want to give them a massive chance to finally win at Anfield?!

Anyway, I expect similar to what Karl and Henry have suggested there.

The big question is only at centre-back and centre-midfield, it kind of seems like you need to play a ‘first team’ player in each of those, but then Van Dijk and Henderson/Wijnaldum could use with being rested, and Milner is needed at left-back.

It depends also if Brewster is fit—I imagine Klopp will tell us at his press conference on Friday afternoon.