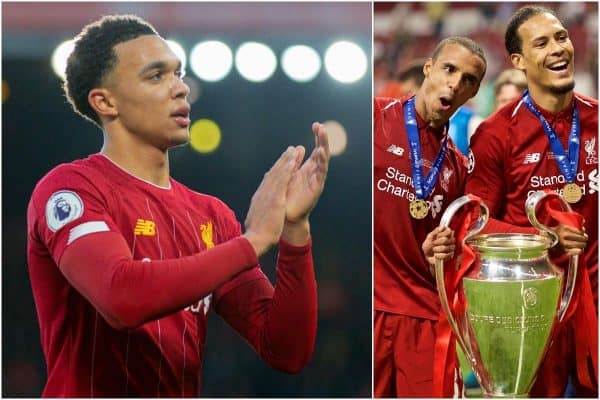 Trent Alexander-Arnold has stressed it is “strange” that Joel Matip was overlooked for a host of end-of-year awards, in an entertaining interview.

Matip was a key factor in Liverpool’s successful end to 2018/19, forming a rock-solid partnership with Virgil van Dijk at the back and starting of 20 of the final 23 games in the Premier League and Champions League.

His form at the start of the current campaign saw him arguably outperform Van Dijk himself, and it was a bitter blow that he has been ruled out since October with a knee injury.

Though he was named in the CAF Team of the Year earlier this month, Matip was barely recognised for his performances in the usual end-of year awards, including FIFA 20’s own XI.

Liverpool had 10 nominees among the 55-man shortlist, with these being every player in Klopp’s first-choice lineup last season bar Matip himself.

In an interview Soccer AM, Alexander-Arnold reflected on the shortlist, and highlighted why Matip’s absence was “strange.”

“All of the players,” he said, when asked who should have been included.

“Obviously it’s a team sport, and to do the things that we’ve done it takes more than the 11 people that start, it takes a whole squad.

“I’d say the 10 people that were nominated [deserved it], I don’t think Joel got nominated either which is a bit strange.

“Because he proved that he is one of the best centre-backs in the league, if not the world, over the course of last season.

“To do the things that we’ve done, we’ve had to work so hard and put the time in, so I’d say it was disappointing not to see the whole being a Liverpool team!”

When asked which of Liverpool’s midfielders is the best all-rounder on FIFA 20—combining their entire ratings—Alexander-Arnold correctly picked Wijnaldum.

“The way that the full-backs attack, they obviously cover us a lot,” he said of the Reds’ engine room.

“The balance that we have near enough every game and the performances that they put in sometimes probably goes unrecognised and unnoticed to many.

“But within the team they’re so valued and we all appreciate the amount of stuff they do for us.”

The interview also revealed that Fabinho is the most-used of any Liverpool player in the game, while Alexander-Arnold provided another insight into his partnership with Robertson.

“It works perfectly, because I’d say I’m more of a passer of the ball and he’s more of a runner,” he said.

“So it’s not identical, where we’re both two defensive full-backs or we’re both unbelievably attacking; he runs a lot more than me, he’s a better dribbler, and I like to pass the ball more than running with it.

“I think that works in that way, and I think to have that balance is good within the team.”