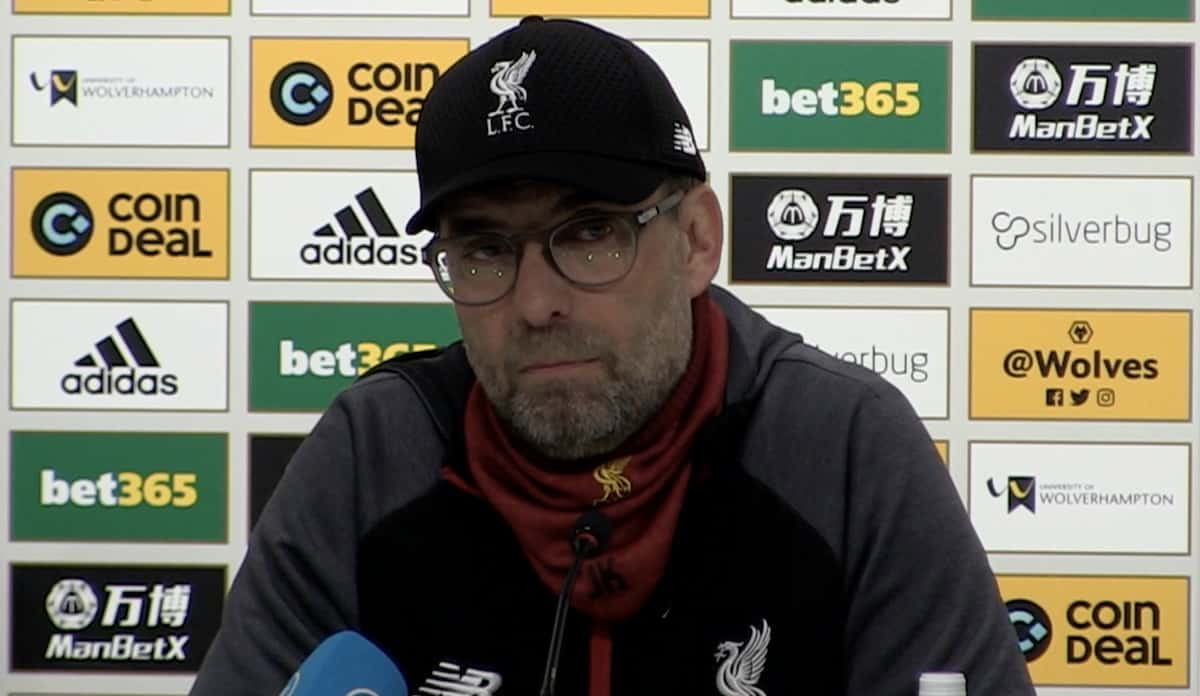 Jurgen Klopp acknowledged Liverpool had come through a very difficult challenge away to Wolves, but stressed the hard work was far from over.

The Reds were made to work hard, suffer under pressure and have to find another late winner to see off Wolves 2-1 in the end in the Premier League on Thursday.

Jordan Henderson headed home from a corner early on and Roberto Firmino showed great footwork to score the late winner, with Raul Jimenez heading in an equaliser in between.

The boss was full of praise in his post-match press conference for his team for dealing with the somewhat unique challenge that Wolves present, with a 3-4-3 set-up led by the speed demon outlet of Adama Traore.

“We knew beforehand it would be a really, really tough game,” Klopp told journalists.

“Wolves are so different to everything else you face this year. The way Nuno sets it up is really good.”

Even with the late win it wasn’t a night without drawbacks; one of the big questions at full-time was on the injury sustained by Sadio Mane.

The Reds’ No. 10 went off midway through the first half and Klopp doesn’t expect he’ll feature much across the next few games, suggesting it may be a hamstring strain.

“Don’t know exactly. It’s probably a muscle; he felt something, a hamstring. We have to wait. We will see.”

Klopp further praised the “worldie” strike from Firmino which won the game and stressed the importance of being ready for the upcoming games.

Rotations can be expected for the weekend cup game, which may give a chance for one or two who were on the bench tonight—including Premier League debutant Takumi Minamino, who Klopp felt did “exceptionally well” in difficult circumstances.