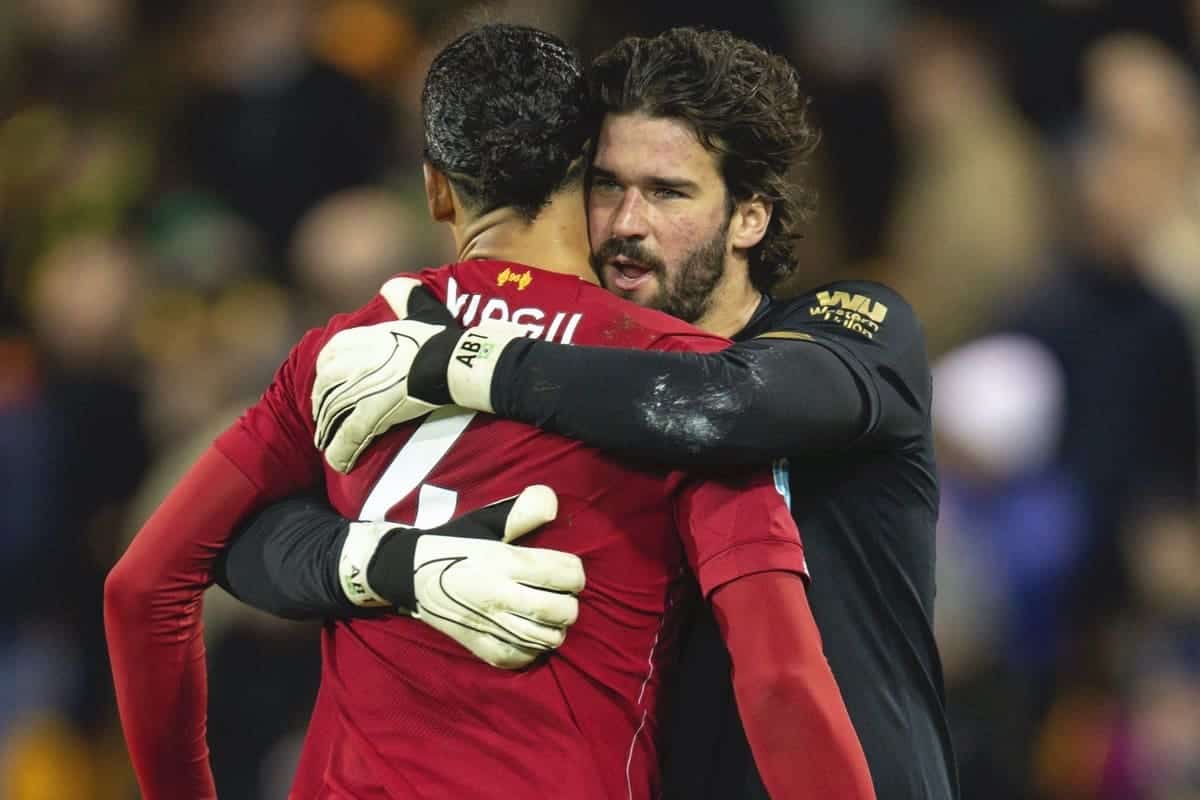 The media lauded Liverpool’s defensive excellence and maturity in the 1-0 win at Norwich, and finally gave Alisson some deserved credit.

The Reds, as they always do, found a way to three points to extend the lead at the top of the table to an unbelievable 25 points.

A sensational, explosive finish from super-sub Sadio Mane was enough to claim the victory at Carrow Road on a day Liverpool were certainly not at their very best.

Klopp will be delighted to have collected yet another win from a tough contest which now leaves the Reds needing just 15 more points to secure the big prize.

Here is all the key analysis from the media on the hard-fought victory.

The way in which Liverpool did just enough to get over the line and not over-exert themselves ahead of a crunch European tie was the mark of a great team, in the view of the Echo’s Ian Doyle:

With such a big lead at the top of the Premier League – it’s now a frankly ridiculous 25 points ahead of Manchester City having played a game more – this wasn’t Liverpool’s biggest match of the week.

They did enough. More than enough, in fact. And that’s the sign of a great team.

ESPN’s Mark Ogden praised Liverpool for finding a way to victory and explained how the hard-fought manner of this win highlighted the strength of the Premier League this season:

The fact that they had to work so hard for the three points is a testament to the depth of the Premier League.

While all of the above may point to the Premier League lacking the strength and depth, maybe the reality is that it actually emphasises just how good this Liverpool team are.

Teams in the bottom half of the table have made Liverpool earn their victories this season. None has rolled over and gifted them the points.

The BBC’s Shamoon Hafez was in awe of how Liverpool have dominated the league, and thinks the Reds can do the same in Europe to reach a third consecutive Champions League final:

To say Liverpool have dominated the division is an understatement – they have annihilated all in front of them and the numbers make staggering reading.

The defending European champions go into Tuesday’s last-16 first-leg tie at Atletico Madrid in flawless form and Klopp’s side will take some stopping from reaching their third consecutive final, as they aim for a Premier League, Champions League and FA Cup treble.

The Mirror’s Darren Wells praised Liverpool for securing Champions League football so early and for the way they have returned to being a regular on the elite stage:

In a week where rivals Man City have been banned for two years from Europe’s top competition, Liverpool secured their place in the Champions League next season. Only two seasons ago the Reds were still scrapping around on the final day to guarantee fourth spot.

It shows how far Liverpool have come and the remarkable season they’re having to have wrapped up qualification in February.

The Liverpool Echo’s Paul Gorst noted how the Reds’ unassailable lead at the top of the league will now help Klopp’s pursuit to defend the Champions League crown:

The Reds are still firmly in the hunt to become just the second team to defend the Champions League in its current guise, too. The Reds boss will look to adjust accordingly.

The Mail’s Oliver Holt provided some incredible stats on the Reds’ march to the title and wrote that “to witness Liverpool this season is to watch something very special”:

Jurgen Klopp’s side now has the best record after 26 matches in the history of the top five European leagues. They have now gone 43 top-flight matches unbeaten, six matches behind Arsenal‘s record of 49 games set in 2003-04.

They have now earned 103 points from the last 105 available to them in the Premier League. They have won 34 of their last 35 league games and their 73 points from 25 matches this season is a top-flight record. […] To witness Liverpool this season is to watch something very special.

Yet another clean sheet for the Reds prompted the Mail’s Dominic King to laud the collective effort given throughout the team which has built such defensive strength:

They might be a winning machine, a team that scores goals at the right moments, but what is carrying them closer and closer to the title is their desire to keep them out.

You can highlight the quality of certain individuals but Liverpool do not boast such a formidable defensive record because Virgil van Dijk stands in the middle or because Alisson stands between the posts. This is very much down to the collective.

Doyle explained how this hard-fought but controlled win showed how Liverpool have evolved and matured since the crazy 5-4 win at Carrow Road three years ago:

The latest visit to Norwich City, then, was an ideal showcase for how the Reds manager has changed, how his team has changed. Sure, there’s still the thrilling attacking football. But pragmatism is now the watchword at Liverpool.

The Reds have the knowhow to do exactly what is needed to win, and the talent and personnel to execute any gameplan. And when a little extra is required, the squad has sufficient depth and options.

Elsewhere, the Telegraph’s Sam Wallace reserved a word of praise for Norwich for doing something barely any side has managed in coming up with an effective game-plan to at least restrict the Reds:

They had not created many chances but they had an effective plan to control the league leaders that just ran out of steam at the end when faced with a player of the undoubted qualities of Mane. 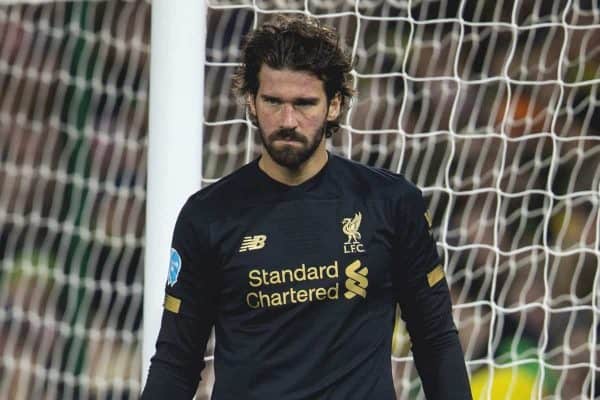 The Mirror’s Andy Dunn admired how Alisson makes everything look so effortless and stated that the Brazilian has been as key as anyone to Liverpool’s dominance this season:

He just does everything with assured efficiency, with authoritative intelligence. Apart from that moment, he had very little to do here but the confidence he gives to his defenders is obvious and his distribution assured and safe.

Alisson is every bit as crucial a cog in this Liverpool machine as Virgil van Dijk or Mohamed Salah or Roberto Firmino or Jordan Henderson or the match winner, substitute Sadio Mane.

Wells continued the plaudits, lauding how the Brazilian ‘keeper always delivers at the most vital moments:

Arguably Liverpool’s most undervalued player despite his world class status, goalkeeper Alisson once again spared his side’s blushes when they almost fell behind.

Two superb saves against West Ham last month ensured his side came away with all three points, and he continually comes up with the goods when it matters.

The regularity in which Alisson comes up with such decisive moments makes the Brazilian the world’s best goalkeeper bar none, in the view of the Independent’s Melissa Reddy:

It was a crucial intervention at an important juncture, the kind the Brazil international has made habitual while establishing himself as the best in his position in the world.

Wells thought Liverpool “looked a different team” after Mane’s introduction and stated that the No.10 has been arguably the biggest influence this season:

The Senegalese forward came off the bench with his side chasing a goal, and injected some life into the Reds’ attack, who looked a different team following his inclusion.

Henderson has rightly gained plenty of plaudits for his contribution this season, but Mane’s influence should not be understated.

ESPN’s Liam Wheeler was impressed with Jordan Henderson’ contribution, particularly admiring the captain’s industry in the middle of the park:

Hard to argue there’s a harder working player on the planet. Henderson still got through plenty of skill work too, picking out Firmino with an insane pass over the top before assisting Mane with an equally stunning long ball for the winner.