Jurgen Klopp has made one change to his starting lineup as Liverpool look to get straight back to winning ways against West Ham.

The Reds are back at Anfield as they host David Moyes’ side in the Premier League, with Liverpool on the hunt for their 26th win of the season.

With Liverpool heading into the clash off the back of a rare defeat which came at the hands of Atletico Madrid, Klopp’s spoke of the need to “put things right” at the first time of asking.

And he has made just one change to the XI who started in Madrid, with Jordan Henderson’s hamstring injury enforcing his absence from the matchday squad for the first time in the league this season.

Alisson remains between the sticks, with the ever-reliable quartet of Trent Alexander-Arnold, Joe Gomez, Virgil van Dijk and Andy Robertson sitting ahead of the Brazilian – in search of their ninth clean sheet from their last 10 league games.

With the skipper unavailable, Naby Keita steps into an advanced role in the middle of the park alongside Fabinho and Gini Wijnaldum.

And a six-day break ensured there was “absolutely no need” for a host of changes for Klopp, meaning the trident of Mohamed Salah, Roberto Firmino and Sadio Mane lead the line once more – with the latter having only been withdrawn in Madrid due to fears of a red card.

The Hammers currently sit in the relegation places, one point away from safety, and with Klopp expecting “a tough match” from a side fighting for their place in the topflight, he also has the likes of Divock Origi and Takumi Minamino to call upon from the substitutes’ bench.

James Milner, however, is not in the matchday squad as a precaution due to a slight muscle strain. 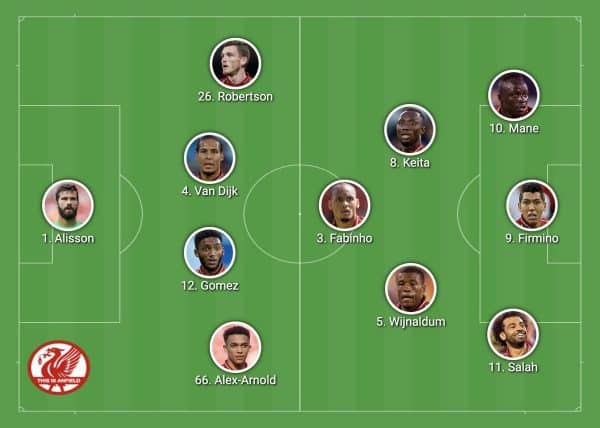