Jurgen Klopp admitted his Liverpool side are surprising even him after the Premier League’s runaway leaders beat Southampton 4-0 to make it 100 points from the last 102 available.

However, the German insisted after the routine Anfield success that his world and European champions are far from perfect.

The Saints battled hard through the first 45 minutes and created a number of chances but after Alex Oxlade-Chamberlain opened the scoring two minutes into the second half, Liverpool ran riot with Jordan Henderson doubling the lead before Mohamed Salah’s netted twice.

The win takes Liverpool a massive 22 points clear ahead of Manchester City’s trip to Tottenham on Sunday, and they now need only seven more wins to guarantee a first domestic title since 1990.

If Klopp is looking for warning signs to show his players, he need look no further than the first half here.

Although Alex McCarthy had to make a double save to deny Virgil van Dijk and Roberto Firmino, the Saints had the better chances, thanks in part to defensive mistakes from the hosts, but saw the best of them – a shot from Danny Ings – hit the heel of his strike partner Shane Long.

“It is easy for me to use this game as a description,” Klopp said. “They were incredibly difficult opponents to play. They were not here to be part of any party. They wanted to hurt us, to beat us.

“The attitude and the mentality of the boys made it possible we could win this game. It looked not only tricky – Southampton are too good to be a banana skin – but it looked today it would probably happen.

Klopp has not experienced a Premier League defeat in more than a year but insisted it does not feel that way.

“I am a very optimistic person but not before a football game,” he said. “Today Southampton had too many shots and finishes but what (Alisson) is doing, I have no clue. The finishes were good but Ali is there.

“We are not perfect, not even close. We don’t care about being perfect. We just try and use our skills in the best possible way. The boys do that and that is why we have these kind of numbers. It just feels like hard work.”

Southampton were left to rue those first-half chances that got away, and could feel aggrieved at a penalty decision not given when Ings went down in the box immediately before Liverpool broke away for Oxlade-Chamberlain’s opener. 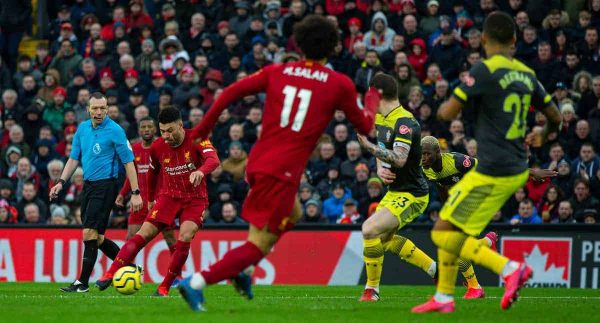 “I wanted to see this game when we go 1-0 up, and the penalty decision is a crucial moment,” Ralph Hasenhuttl said.

“But I don’t want to talk about any refereeing decisions today because my team played too well to lose the focus on what they did.

“It is not surprising that when they are one up or two up it is getting more and more difficult and when you press the space it is getting bigger.

“But it was surprising that they had 50 minutes and not a good chance at goal. We had chances. Against the best team in the world, playing like this for 50 minutes is a massive signal.”