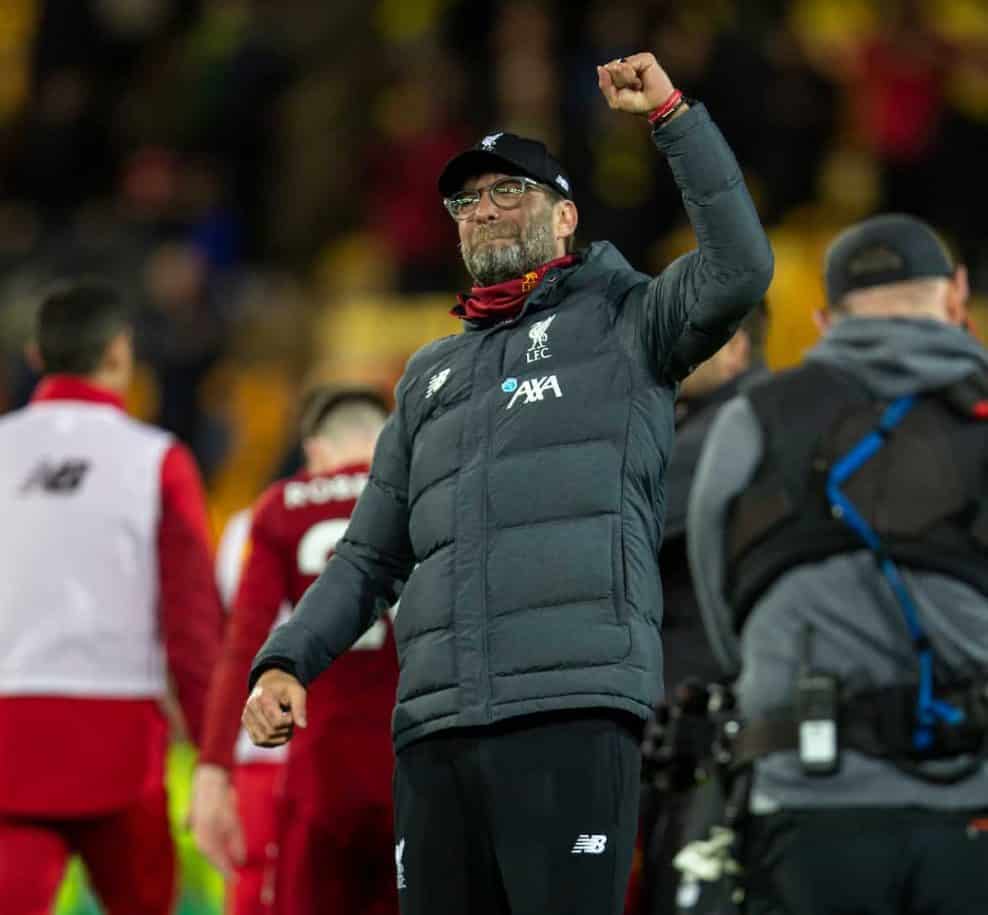 Liverpool manager Jurgen Klopp admits the standards his side are setting are incredible after a record-equalling win over West Ham put them within four victories of a first title in 30 years.

A 21st successive league win at Anfield matched the Reds’ own top-flight record, set between January and December 1972, while an 18th consecutive victory drew them level with Manchester City’s Premier League landmark set in 2017.

They are closing on on a long-awaited domestic championship having dropped just two points this season and even Klopp, usually reluctant to celebrate milestones, has been impressed.

“A couple of years ago, three or four maybe, in the beginning, I said we want to write our own stories, we want to create our own history,” he said.

“Obviously, the boys took really seriously what I said there and that’s all cool – but just not too important in the moment.

“Tonight was difficult obviously, so the number of wins you can only have if you win all of these games: the difficult ones, the easy ones – if there ever was one – the brilliant ones and the rougher, more grumpy ones.

“In the end, that’s what counts. We all know it’s very special, but in the moment we are really just in the situation and want to recover and prepare for the next one.

“The next opponent is really waiting and wants to fight us. I saw the boys tonight, they are ready to fight and as long as we are really ready to fight, nobody should worry, but we still have a lot of work to do.”

Another record was equalled on the night as Trent Alexander-Arnold matched last season’s Premier League landmark of 12 assists from a defender, having supplied the crosses for Georginio Wijnaldum’s opener and Sadio Mane’s winner.

In between, Issa Diop and Pablo Fornals had threatened to pull off the shock of the season for the league’s 18th-placed side by ending the Reds’ incredible 417-day unbeaten league run.

However, an embarrassing goalkeeping howler in front of the Kop from Lukasz Fabianski allowed Mohamed Salah to equalise before Alexander-Arnold and Mane combined.

“I think we passed the moment where we treat (Alexander-Arnold) like a young boy, he is just a proper member of the squad,” added Klopp.

“Everybody has to contribute, everybody has to bring on the pitch what he is able to do – and the boys do a lot to bring him or (Andy Robertson) in the position and save them there.

“I don’t want to make the performance more than it is, I am completely happy with it but that’s how football works on the highest level.”

West Ham boss Moyes, whose only win since taking over after Christmas came on New Year’s Day, has never won at Anfield and was left to count the cost of errors after a 16th visit without victory left his side in the bottom three.

“It’s really disappointing to come here and say that individual mistakes have cost us,” he said.

“Liverpool, with the quality of players and what they’ve done this year, they have ability to score goals everywhere and in different ways.

“Even at the end, we looked like we could get a third. We have to take positives, but taking no points isn’t one.

“Tonight wasn’t a big game, neither was Man City (last week). The big games start now. The players have been told that in the dressing room.”