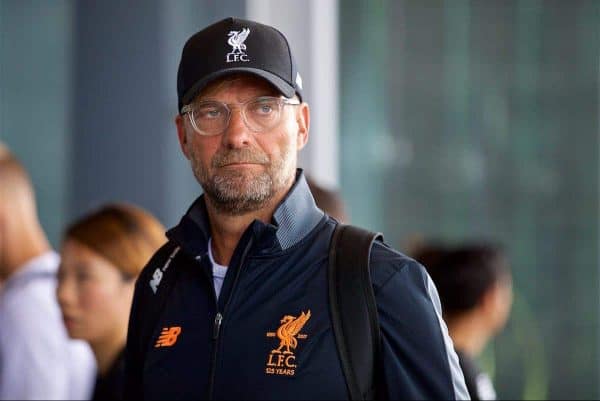 Liverpool were due to head to China for pre-season this summer, but Jurgen Klopp is unsure whether the outbreak of coronavirus could impact their plans.

Coronavirus was first reported from Wuhan, China on December 31, and is believed to have spread to at least 53 countries, with the BBC revealing that 19 cases have been noted in the UK so far.

The outbreak has affected travel plans across the world, and precautionary measures are being advised, which has overlapped into the Premier League too.

Newcastle manager Steve Bruce told reporters on Friday that, on the advice of club doctors, he has imposed a handshake ban at the Magpies’ training ground to avoid any potential complications.

Klopp was asked in his pre-Watford press conference whether Liverpool had considered any changes as a result, and whether it had impacted plans for a pre-season tour of China.

The Reds are expected to tour the Far East this summer in conjunction with their new kit deal with Nike, but while nothing is changed as of yet, Klopp did acknowledge that discussions will be held.

“For pre-season not yet, we didn’t really think about changing anything from pre-season, but I know that [talks] will happen,” he said.

“First and foremost, it’s led by our medical department, so all the advice, we get from there.

“But you know, if you don’t come in here and don’t shake hands, I’m now two metres away from you—whatever you have, I probably cannot avoid getting it as well.

“We even had an interview outside and we were much closer. I didn’t feel too uncomfortable!

“We take it really seriously, but we cannot avoid everything, that’s how it is and in the end it’s not a football problem, it’s a society problem, that we all have in common.

“I think everybody’s thinking about it in the moment, and hopefully the much-smarter people than us find a medicine for it.

“Because that’s obviously the biggest problem in the moment, that makes a big difference to other diseases.

“We don’t have that yet, but everybody is working hard on that, and then hopefully it will settle.

“But in the moment we deal with it like all other people, we take it serious, we don’t do some things we maybe usually would do, but that’s the same for us when the flu is going around, we cannot do anything different to that.

“And I think, really, in the moment everybody takes it seriously.

“We do that as well, so far we haven’t told everybody not to shake hands, but we don’t force anybody to shake hands, we have all the disinfection areas here where you can wash and disinfect our hands.

“Is that enough? I don’t know. We cannot do more than we do actually, and then in the end nobody told us that we don’t have to play football, so as long as that doesn’t happen we will play football.

“It’s a contact sport, don’t forget, and it’s always important that we take things seriously, but that we don’t get crazy about it.

“There are other areas in the world, obviously, where it’s more difficult, and hopefully we find a solution for that really quick, that would be my first concern.”