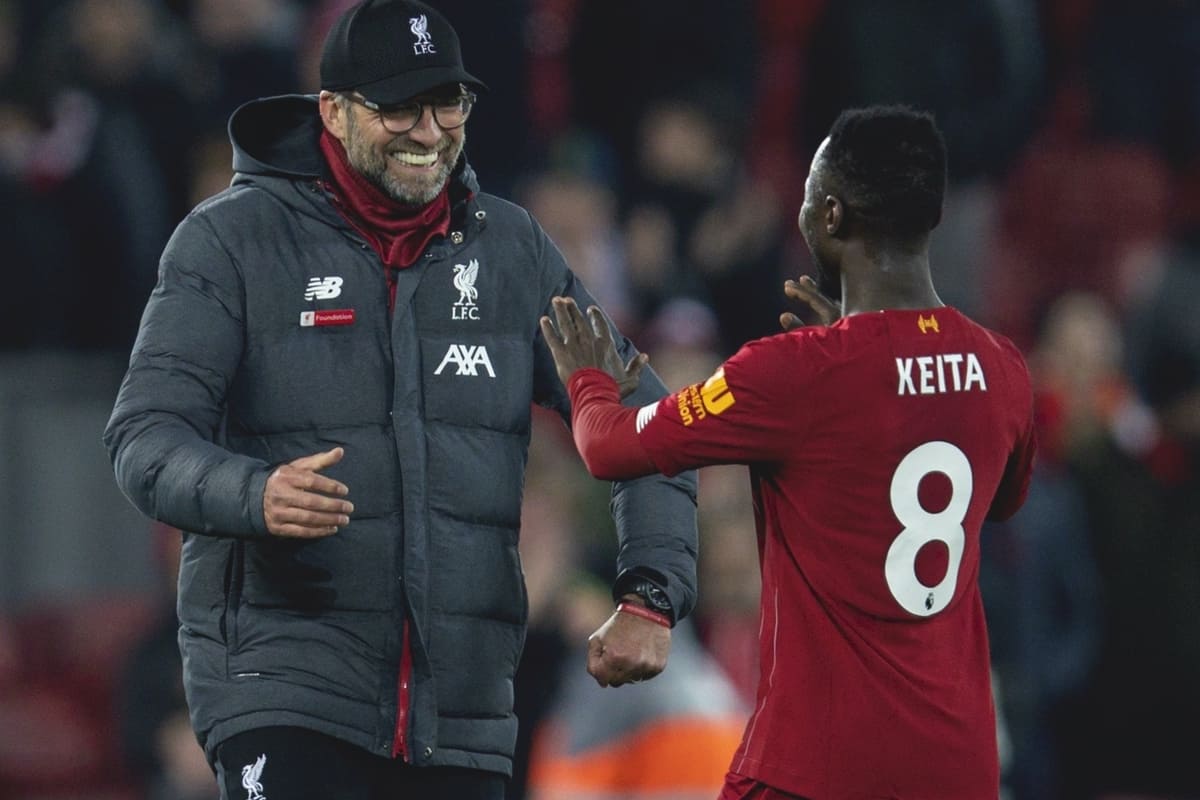 Jurgen Klopp has a captain-shaped hole to fill as he selects his Liverpool lineup to take on West Ham, with Naby Keita leading a host of potential candidates.

The Reds are back in Premier League action on Monday night after the rare disappointment of a 1-0 loss to Atletico Madrid in the Champions League.

That defeat at the Wanda Metropolitano and can still be overturned in the second leg, of course, but Klopp is already aiming for a response by “putting things right” at home.

West Ham are visitors to a vengeful Anfield, with Liverpool closing in on their first title in 30 years, while the Hammers teeter on the brink of relegation.

Klopp could make changes against David Moyes’ side, and will make at least one, with Jordan Henderson absent due to a hamstring injury.

So how will the Reds take to the field for their 27th game of the league campaign?

The first question of Klopp’s pre-match press conference was, understandably, on the extent of Henderson’s injury, and fortunately he revealed “it could have been worse.”

“How we all know it was a hamstring thing, and we heard of different hamstring injuries now in the Premier League, Harry Kane for example,” he said.

“It’s not that bad, but he will be out, I think, for three weeks or so, which is not cool, but how we see it we were still lucky.”

Henderson will therefore be out for this game and likely the following three, with second leg against Atletico pencilled in for his return as he joins Xherdan Shaqiri on the treatment table.

Klopp revealed he could make changes, “because apart from Hendo all the other boys are fit,” but suggested there are unlikely to be many as “[with] Tuesday-Monday there’s absolutely no need to do it.”

James Milner, Alex Oxlade-Chamberlain and Divock Origi came off the bench in Madrid, while were Keita and Takumi Minamino unused and Adam Lallana missed out entirely, with plenty of options for the manager to consider.

Klopp’s assertion that there is “absolutely no need” to make alterations to preserve fitness indicates that his lineup could be very similar to that which took to the field in Spain.

Alisson is immovable between the sticks, having impressed yet again despite defeat, while Trent Alexander-Arnold, Joe Gomez, Virgil van Dijk and Andy Robertson are settled as first-choice defence.

The form of Gomez—another standout in Madrid—in particular has come to the detriment of Joel Matip and Dejan Lovren, who will likely tussle for a single place on the bench again.

In midfield, Fabinho is near-guaranteed to start as the No. 6, while Gini Wijnaldum should keep his place in the three-man unit, too.

With Henderson dropping out, Keita provides the most interesting option to step into the advanced role, fending off competition from Oxlade-Chamberlain, Milner and Lallana, against a meek West Ham side.

This leaves Mohamed Salah, Sadio Mane and Roberto Firmino to start in attack, with no issues with Mane’s fitness, having been brought off at half-time in midweek due to the risk of a red card: 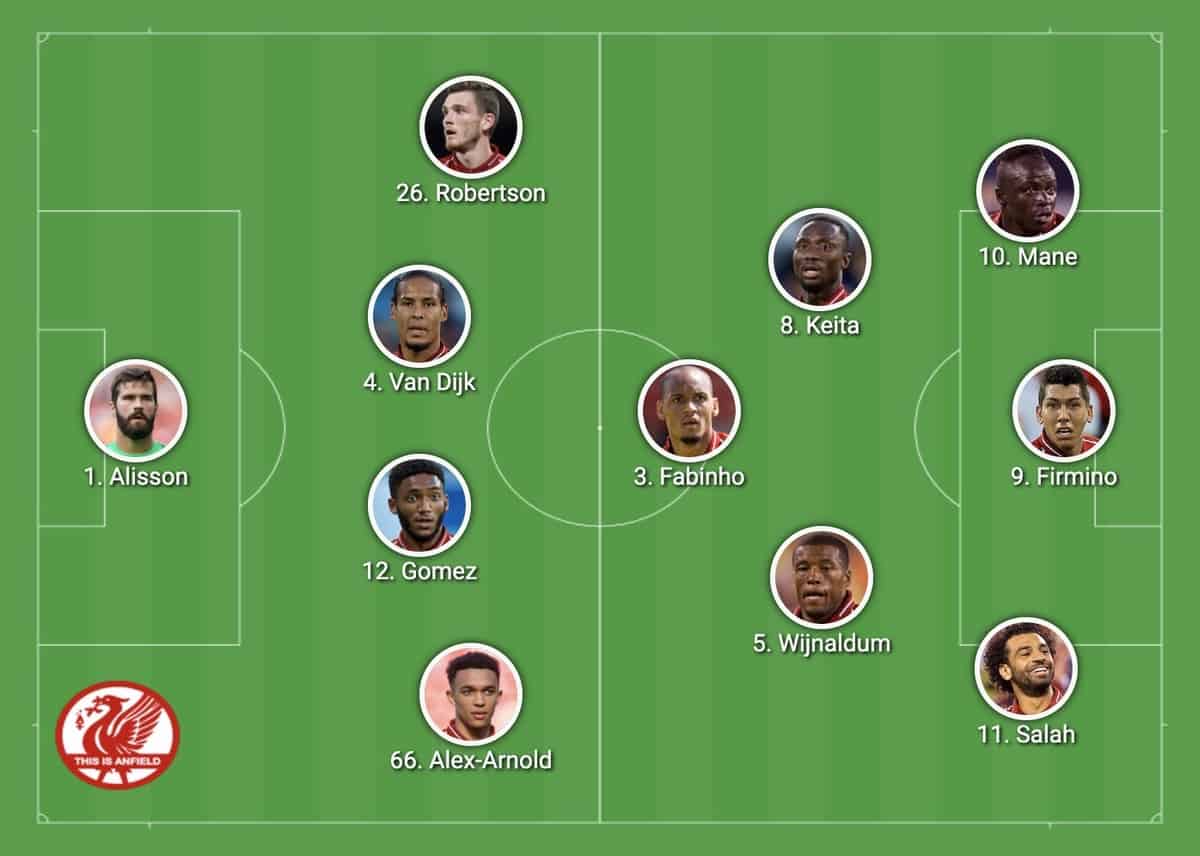 There is, however, the option of shaking things up, and perhaps this could come with a change of system and the return of the 4-2-3-1.

This has paid off against ‘lesser’ sides already this season, with victories over Everton, Bournemouth and Watford, and a four-pronged attack could thrive against the league’s third-worst defence.

Alisson and the same back four would be retained, of course, but a shift in setup could see Keita miss out again as Fabinho and Wijnaldum are deployed in the double six.

Oxlade-Chamberlain or Origi would be considered alongside Mane, Firmino and Salah the striker, but it may be time to pull the trigger on Minamino.

It has been almost two months since the 25-year-old’s arrival, and though this would be ahead of the three-month time frame for Fabinho‘s first league start, there would arguably be less of a risk with an attacker.

If Minamino does start, Liverpool could line up like this: 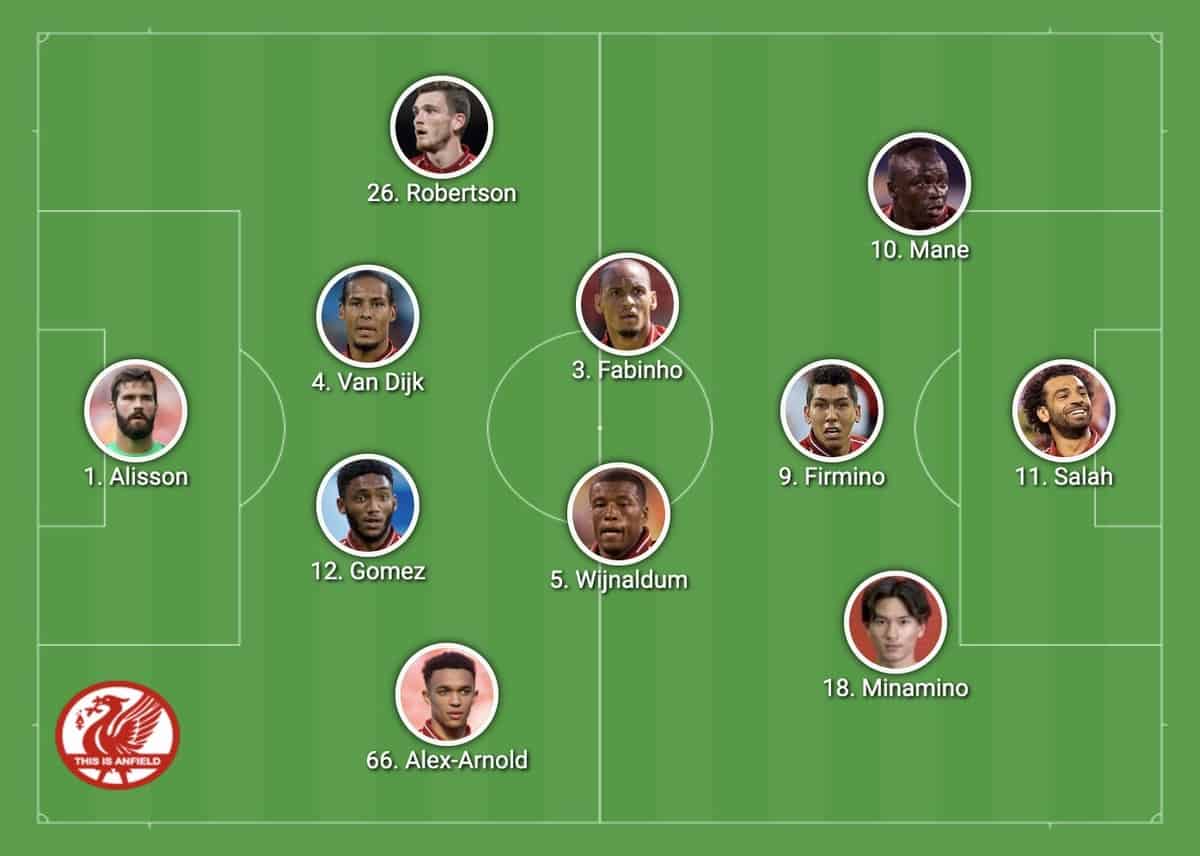 The latter XI is certainly the less likely, as with up to five wins required to guarantee the title there is little need for experimentation at this stage, particularly for a ‘winnable’ game.

Klopp has clear faith in Keita, who showed signs of returning to form in his last start against Norwich, and the Guinean is the best stand-in for the stricken Henderson this time around.