Liverpool are clear in the view that they are continuing their Champions League campaign as “underdogs” as they look for back-to-back triumphs in the competition.

The Reds ended a seven-year wait for a piece of silverware when they clinched the club’s sixth European crown in Madrid last season in the win over Tottenham.

It was the first trophy collected under Jurgen Klopp and the catalyst for a further two this season with both the Super Cup and Club World Cup having made their way to Anfield.

And an insatiable appetite for wins on the board and trophies in the cabinet sees the Reds sat 25 points clear atop of the Premier League table, where five more wins separate the club from their 19th league title.

For now, however, attention has shifted towards their European defence as Atletico Madrid await in the last-16 – a tie which pits a side with 17 consecutive league wins against one who has won one of their last seven in all competitions.

But despite their recent run of form, Klopp is under no illusion as to the challenge which awaits against Diego Simeone’s Atletico, a side who know how to “play for a result.”

“Their goal difference [in La Liga] is they have scored only 25 which is not too many, but have conceded only 17, which is low,” Klopp said. 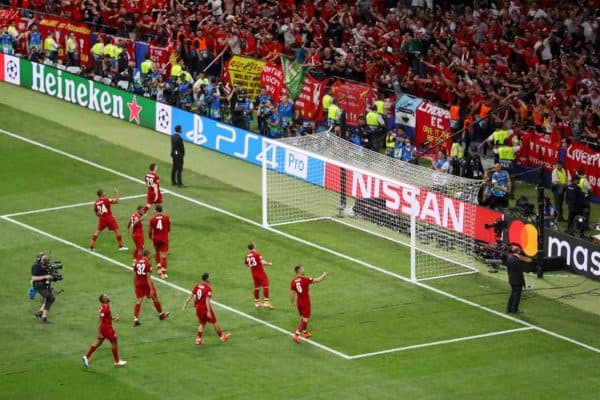 “They have had massive injury problems in recent weeks, a lot of strikers missing. But [Alvaro] Morata was on the bench [against Valencia on Friday], I’ve heard [Diego] Costa is back in training and Joao Felix is available I’m pretty sure.

“If somebody can play for a result, it’s Atletico. Mr Simeone, who I respect a lot, he tries everything.

“We have a similar story a little bit. We tried a lot and didn’t win, but we still tried. I like that. He is so competitive – wow! Actually, we have a good relationship but I’m pretty sure he will forget that on the touchline because he is so animated.”

The match-up sees Liverpool return to the Wanda Metropolitano for the first time since they lifted Ol’ Big Ears, but there is no time “for a pilgrimage” as it’s strictly business for his side.

“We know that it’s just a stadium, but it’s a positive emotion that we have when we think about that stadium,” he continued.

“It was one of our greatest nights and I’m pretty sure that when the boys will go in they will see it.

“But we are not going there for a pilgrimage. For sure not. We have had enough time to let these things settle.”

As ever, it is a mindset which is mutually shared with the squad as the season’s theme of only looking to the next challenge and not in the past or distant future is deeply ingrained in the team’s psyche.

And Joe Gomez, who emerged from the bench at the death in the final, was quick to dismiss any suggestions that a win at the stadium correlated to their next challenge against Atletico – one which they are approaching with an “underdog mentality.”

“You could say the same about Anfield. We have had loads of good games there, too. You can’t correlate last June to playing Atletico.

“It doesn’t need saying to anyone in the team. That’s what is making this such a pleasant journey. We just keep going forward.”

“You aren’t proven winners until you show you can do it again and again. We went [to Madrid] last season and beat Spurs in one game. Now it is about maintaining that reputation in the Champions League.

“People might say, ‘Oh yeah, they’re performing well’, but as a team, we have still got an underdog mentality.

“We’ve won the Champions League, but everyone is eager to win it again. The focus within the camp is just one game at a time. It comes right from the gaffer through the spine of the team — the skipper (Jordan Henderson) and Milly (James Milner).”