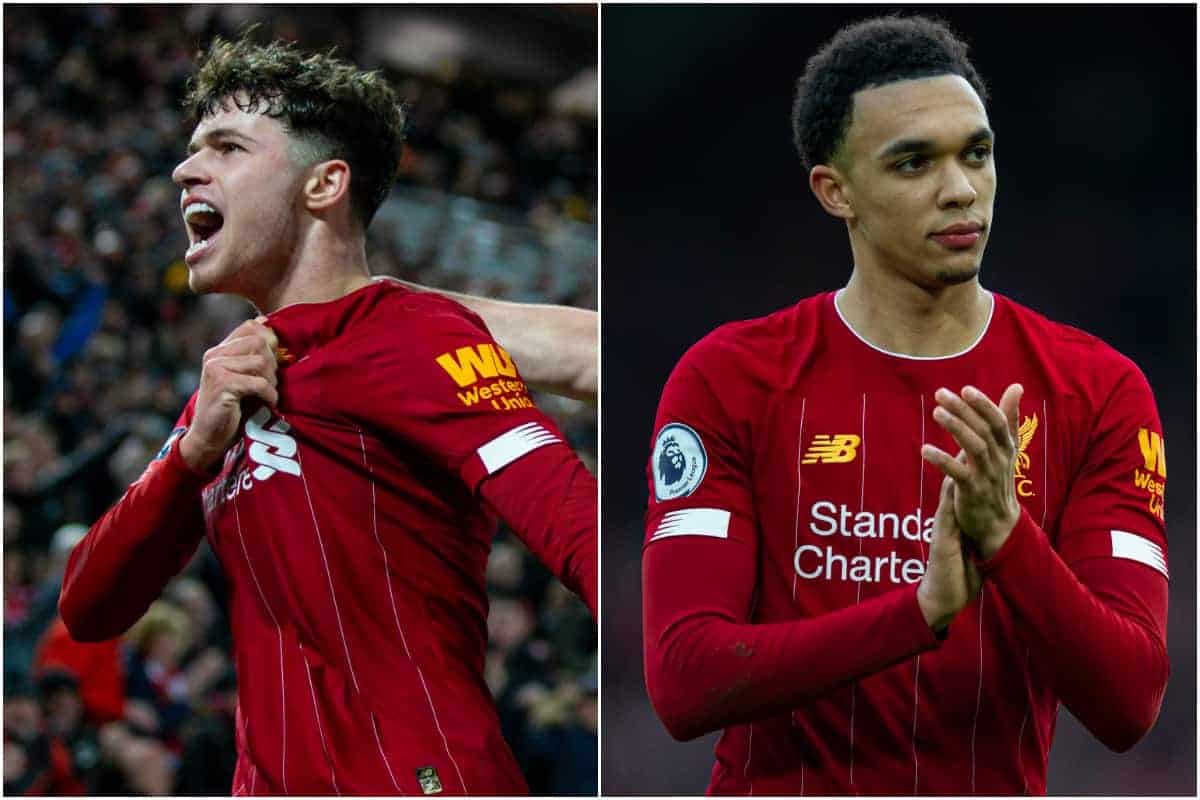 Liverpool teenager Neco Williams believes the club’s joined-up thinking when it comes to the integration of youth team players is proving itself on the field.

The Wales under-19 international has been part of the first-team training set up on and off for the last 18 months or so and being close-up and personal with fellow right-back Trent Alexander-Arnold has helped him develop his game.

Williams was man of the match in Tuesday night’s 1-0 FA Cup fourth-round replay win over League One Shrewsbury, achieved by a team with an average age of 19 years and 102 days.

And he puts that partly down to being close to Alexander-Arnold.

“Yeah of course. He’s obviously one of the best right-backs in the world right now so every day I’m training with him I’m picking up little things each day and trying to bring it into my own game,” he said.

“Each day as it goes I don’t take for granted. I’m just grateful to be there every day.”

The focus before the match had been on manager Jurgen Klopp’s decision to absent himself and the first-team squad in order to respect the Premier League mid-season break.

But afterwards there was only talk of the impressive performances of a number of youngsters—including three debutants in the starting lineup—as the team dominated the statistics in every category.

“It was a special night for a lot of us, a night that we’ll remember for a long time especially the debutants,” added Williams, whose long pass forward led to the decisive own goal by Ro-Shaun Williams.

“It just makes us want to win more. Whatever team plays out there at Anfield is going to give you a result like we did against Arsenal, against Everton and obviously now.

“I just think as soon as the whistle goes all your mind’s focused on is the game. All your thoughts go away and you’re just focused on the game and—like we showed—the boys are capable of winning games and obviously got the win.”

Chelsea at Stamford Bridge await in the next round and midfielder Pedro Chirivella, the veteran of the team at 22, hopes some, if not all, of this team are given another chance.

“From the day we knew we were playing, we prepared to win this game,” he said.

“Mentally I feel ready. I train every day with the first team and I feel I am getting closer to the level.

“I came [to the club] very early, when I was only 17, and maybe I was not ready yet. Now I feel I am getting there.

“I am getting very good feedback from the players. My mentality has changed and hopefully I can carry on.”