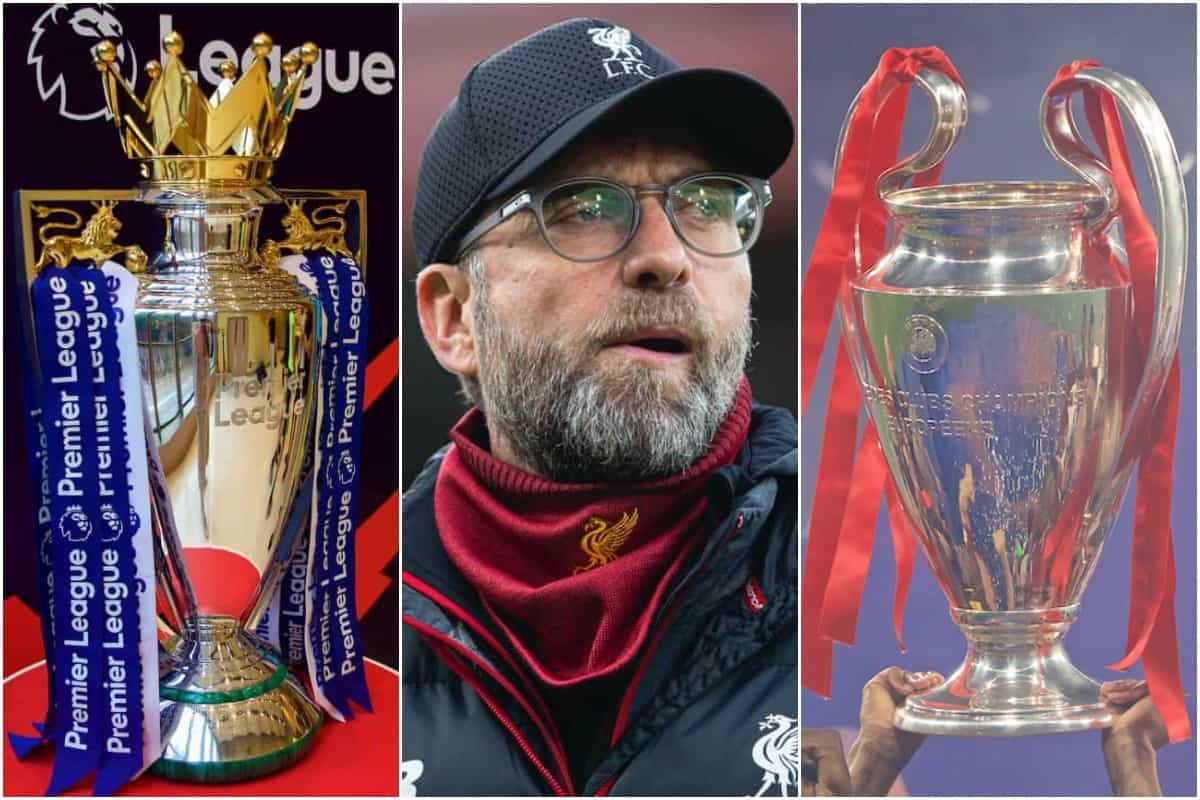 Liverpool remain in the hunt for a further two trophies in addition to the Premier League title and a host of records, but where do fans’ priorities lie?

Liverpool find themselves in the privileged position of securing a further three pieces of silverware this season in addition to a myriad of records.

A Premier League title is on route and with it a chance to end the campaign as only the second-ever unbeaten team in the competition’s history and one with over 100 points.

Arsenal and Manchester City currently hold the respective records, and after a rampant run to date which has seen the Reds pick up 79 points from a possible 81, they are both within reach for Jurgen Klopp’s men.

But with a healthy lead at the Premier League summit, which currently stands at 22 points, there is the chance to rest and rotate the squad with greater freedom with the Champions League in mind once the title is officially confirmed.

The Reds would, of course, need to overcome Atletico Madrid in the second leg of the last-16 tie to be afforded such luxury, but such approach could risk Liverpool’s bid to remain unbeaten in the league and surpass a century of points.

It’s an incredibly fortunate position to find ourselves in and one which over five years ago seemed nothing but a pipe dream.

But This Is Anfield put the question to fans, would you rather: win the league unbeaten and with record ever points total or win the league and Champions League but lose PL game(s) and not beat City’s record.

On Twitter, the overwhelming majority were in favour of the latter with 78.8 percent of the 8402 fans prepared to wave an unbeaten season and City’s point record goodbye in favour of a successful defence of the Champions League in addition to the title.

And here, This Is Anfield duo Joanna Durkan (@JoannaDurkan_) and Henry Jackson (@HenryJackson87) are joined by John O’Sullivan (@NortoriousJOS) and David Comerford (@Dave_Comerford) to discuss their position on the welcome conundrum.

Joanna: If I could be on the fence, in a way I would be. I want both the records and trophies and that special gold one for going unbeaten would be the cherry on top for the long-awaited triumph.

Such records don’t come around every day and to be talked about as the undisputed all-time conquerers of the league would be amazing, wouldn’t it?

But at the end of the day, success is measured by trophies and I can celebrate wildly for a European Cup more than I can for a record.

I, along with other fans, will always know how incredible this Liverpool team is and they’ll be remembered and celebrated as such, with or without records.

John: As Joanna said, Liverpool winning the league title unbeaten would, of course, be a momentous achievement.

But if it was a choice between matching the Arsenal invincibles and overtaking the Manchester City centurions or winning the league as well as the Champions League, the latter hypothetical wins hands down.

After losing three final under Klopp, the Reds broke their trophy duck last June in Madrid.

The current team — which mostly boasts players in or around their peaks — are in the midst of their trophy-winning cycle and capitalising upon these opportunities and writing themselves into footballing lore easily trumps vanity achievements like unbeaten league campaigns or record point highs.

Henry: This is a question I almost can’t get my head around because the answer seems so simple to me. I understand that we are all different, though.

It would be an achievement that enhances the legacy and stature of this side around the world, highlighting remarkable consistency in the competition.

Going unbeaten is something that would go down in history, of course, as would breaking Man City’s points total – I’d like that just to witness the fume down the M62 – but at the end of the day, Liverpool don’t get an extra major trophy for doing that.

This team will be judged on silverware in decades to come, not records, so to me, option B is an absolute no-brainer. I can handle a defeat, because, at the end of the day, we’re winning the league regardless!

David: For me, it would certainly be bitterly disappointing to a lose a game from here. We’re unbeaten in well over 12 months, but that would be dismissed if we couldn’t string a season-long run together.

Emulating the ‘Invincibles’, with a far higher points tally, would make this perhaps the single greatest season in top-flight history.

We’re on 79 points with 11 games to go – failure to break City’s points record from here would make for a somewhat underwhelming end to the season when it deserves a glorious conclusion.

But having said all of that, I still have to go for maximum silverware.

For me, Liverpool are the best team in the world at the moment by a distance. And though the gap will probably close, I think we’ll stay at the top for another few years. In that period, we need to be winning as many major honours as possible.

When we reflect, trophies will mean more than records, however impressive they may be.