The next stage of the Champions League has arrived, where Jurgen Klopp is set to reinstate two of Liverpool’s ever-presents.

Three days after Liverpool’s latest Premier League triumph, a gritty 1-0 win at Norwich, the Reds will be straight back to it with a trip to Madrid.

After a two-month hiatus, Champions League action is back on the agenda with a return to the Wanda Metropolitano for a meeting with the stadium’s rightful occupants.

Klopp’s side meets Diego Simeone’s Atletico Madrid in the last-16 with the two teams heading into the fixture with polarising fortunes, with Liverpool having lost just once this season, excluding the League Cup tie at Aston Villa, and Atletico registering just one win from their last seven.

With a healthy squad in tow, the boss has a multitude of options at his disposal as his side look to bring a positive result back to Anfield.

Here’s how Klopp could lineup his side against Atletico on Tuesday night.

After emerging from the trip to Norwich with no casualties, Klopp has an abundance of options once again within all departments.

Xherdan Shaqiri did not train or travel with the squad and remains sidelined with an ongoing calf injury.

But after making the “perfect” return to the fold with the match-winning goal at Norwich from the bench, Sadio Mane is set for a place in the starting lineup on Tuesday as the boss erred on the side of caution with two games in three days.

Similarly, Fabinho is expected to be restored in the middle of the park after only playing the final half-hour at Carrow Road.

After UEFA changed the rules last year, Takumi Minamino will be eligible for the remainder of the Champions League campaign despite playing the group stages with Salzburg.

It is a strong position for Liverpool to find themseleves in at this stage of the season and offers flexibility within both the XI and on the substitutes’ bench.

After playing it safe and looking to the myriad of options at his disposal over the weekend, Klopp is now likely to field an XI which has yet to play a minute of action together this season.

With Mane held back with this fixture in mind, he is straight back in the thick of it for the all-important clash, no doubt aiming to add to his two goals and two assists in the competition so far.

Mohamed Salah and Roberto Firmino would reunite with their fellow forward, ensuring Alex Oxlade-Chamberlain would miss out and Divock Origi would again start from the bench.

The defensive unit is as settled as they come, shutting out the opposition in eight of their last nine games, and they will no doubt remain on the teamsheet.

It is the midfield once again where Klopp will have the most reasons to pause for thought, with James Milner back in contention alongside the likes of Minamino, Naby Keita, Adam Lallana and Ox.

But on the big stage, the boss often looks towards those who have his system down on lock and for that reason Fabinho, Jordan Henderson and Gini Wijnaldum are set to start in what many will consider to be the Reds’ strongest XI: 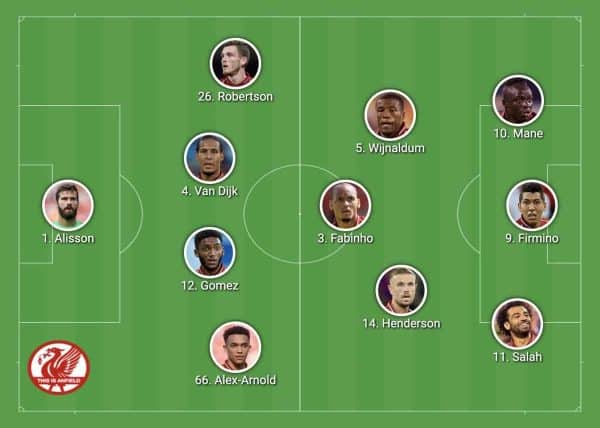 Alternatively, it could be a toss-up between Oxlade-Chamberlain or Keita for the third midfield role to add a different creative spark against an often stubborn defensive unit in Atletico.

While Liverpool’s No. 15 has more than proved his worth in his six successive league starts, Keita could be provided with another look-in after his earning his first appearance in the XI since the Boxing Day clash at Leicester.

It was a mixed performance at Carrow Road but he could be turned to in the midfield trio alongside Fabinho and Henderson.

The back five of Alisson, Trent Alexander-Arnold, Joe Gomez, Virgil van Dijk and Andy Robertson would remain behind the usual front three: 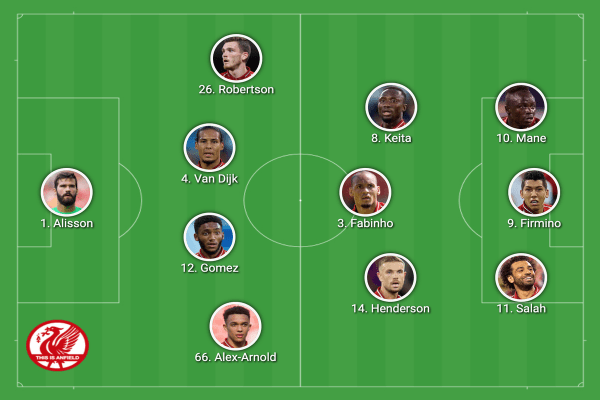 While Atletico are not the formidable side they once were, they do keep it tight at the back – conceding just 17 league goals to date, the second-fewest in La Liga – and so Liverpool will need to be clinical when they have the chance on Tuesday evening.

Away trips in Europe have not always gone the way of the Reds in recent times, but Liverpool will hold little fear of returning to Merseyside for the second leg with the tie in their favour.