The right palm comes up to rest his chin, fingertips caressing the cheek. The brow furrows quite heavily.

We’ve seen it many times before, but never so much as this season when the managerial maestro has met his match. Long-serving rival Jurgen Klopp’s note-taking paid off, handsomely.

Breaking Liverpool’s greatest-ever Premier League points tally last year yet still coming second would be enough to shatter most teams’ spirit, and managers’, but Klopp and his squad used it to full effect.

That effect, we’re now seeing, is to put Guardiola on the back foot like he has never before experienced in his career. The gulf is uncharted territory.

Liverpool’s relentless run saw the Man City boss in a familiar position at the beginning of the month, surrounded by a huddle of journalists in a crowded press conference room.

Up came the palm, wrinkles spread across the forehead. The questions were not easy.

“The last two seasons, it was an owner from the Premier League that says that can’t happen again,” Guardiola preached to the masses, each scrambling to set dictaphones to take down every word.

“City winning the title that way with 100 points is not good for the Premier League, now it’s Liverpool, the owner has to be concerned again…”

He was, of course, referring to comments previously made by former Premier League chief executive Richard Scudamore, who scrutinised City’s ‘centurions’ season and their unstoppable, unrivalled march to the title.

That side, deservedly, was hailed as one of the finest of not only Premier League but English football history. Now Guardiola has more than met his match and he isn’t a fan.

His point was valid. One would, of course, be irked to have their finest achievements so strongly scrutinised, but in drawing immediate comparisons with Klopp and Liverpool, Guardiola flawed his entire retort.

Arriving in England, Guardiola found himself equipped with a City side already familiar with the sensation of being crowned champions. A blank chequebook sat on the desk, waiting to be filled out on demand.

It was a chequebook that had been overused in the years previous and those financial dealings could now influence Guardiola’s future after UEFA finally decided to act this week.

The accusations of being purely a ‘money manager’ no doubt played on Guardiola’s mind as he made his comments regarding the title situation we have before us today. Even the greatest of managers have their insecurities.

When Klopp arrived in 2015 and made the bold assertion that within four seasons a title may have arrived at Anfield he was scoffed at by rival fans.

Those same fans were well aware Liverpool did not have the spending power of the rest of the elite. Nor, at that time, the pulling power.

Guardiola’s arrival at City, in pure contrast, came with so much an expectation of silverware that his failure to win the title in his first season left mouths agape and serious questions asked.

For as good as Guardiola is—and he is, it must be said, a very good manager—he spends money more ruthlessly than almost anybody else in the modern game.

We have much to thank Guardiola for. His Barcelona era all but reinvented modern football. So too, however, has Klopp—much more low-key, bringing Mainz up from the ashes before polishing Borussia Dortmund into one of Europe’s most attractive and formidable sides.

Whereas Klopp teaches patience, Guardiola has always come with a guarantee of coaching excellency out of the world’s finest football players.

Such a formula which burns white hot from the word go is certain to have a faster expiry date. We now see this before us, as Guardiola aims thinly-veiled jibes in the direction of the one counterpart he seemingly cannot get the better of.

On balance, it is important to mention how lyrically the Spaniard has waxed about Klopp’s team, his methodologies and all-round philosophy.

Guardiola has been very praising in his various assessments of the Reds. It isn’t a front, a faux ‘student of the game’ persona. Guardiola adores football, and anybody in love with the beautiful game cannot help but appreciate everything Klopp has managed to achieve at Anfield, not to mention the manner in which he has done it.

Guardiola and Klopp’s comical on-stage double act at the 2019 Football Writers’ Association awards gave a glimpse into the mutual understanding and respect, as the City boss jested about potentially trading his title medal for Klopp’s European honours.

Yet that was then, this is now.

Liverpool are well on course to ending the 30-year wait and, feasibly, could still find themselves in Istanbul come the end of the season competing for No. 7.

Something clicked with the Reds post-Madrid, binding the whole squad together inseparably. That feeling of winning on the biggest of stages forged a new dawn. While City have been cast adrift, Liverpool have done what nobody thought possible.

It is no secret that the Champions League is Guardiola’s lifeline this season. It’s the one trophy above all others he prides himself upon.

City’s richer-than-God owners would provide a detailed and comprehensive list as to why they brought Guardiola to the Etihad, yet what it all boils down to is becoming the champions of Europe. Alas, this might be their last chance for at least two years…

Klopp’s clinching of that trophy, followed up by a quite biblical domestic campaign to date, appears to have sent Guardiola teetering on the edge.

When backed into a corner and placed under the spotlight, even the most genius of individuals say peculiar things.

Real Madrid could very likely eliminate City in the first knockout round. Guardiola knows it. It’s arguably his toughest-ever draw as manager of the club, prompting him to this week muse: “I accept it. I want to win the Champions League, I dream and will enjoy the games against Real Madrid, to see what I can do.”

And then it came, almost by reflex…”Liverpool have spent four or five years to win the first title last season. It was a process—new players, the process, then invest more and more, and they are the best team in the world right now.” 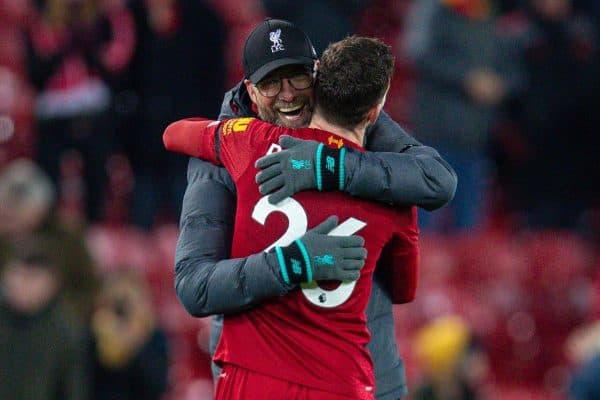 He couldn’t help himself, the red nemesis were drawn into the equation again.

Liverpool’s net spend over the past five years doesn’t have to be put up alongside City’s. There’s simply no point, the disparity is huge.

Ownership on Merseyside has remained the same since the day Klopp walked through the door. The club is now wealthier, sure, but as a direct result of progress on and off the field. Liverpool right now are a luxury of their own doing, and with luxury comes lucrative windfall.

Can Liverpool now outspend City? No. Do they actually need to? Also no. Herein lies Guardiola’s true issue.

Under Klopp’s guidance the cultivation of Trent Alexander-Arnold into one of the world’s finest full-backs has drawn universal praise. The lad is still, somehow, only 21.

Andy Robertson has been developed from a Celtic reject to World XI contender, while each of Roberto Firmino, Mohamed Salah and Sadio Mane have far exceeded levels many deemed possible.

Next season Liverpool will introduce both Curtis Jones and Harvey Elliott into a more regular senior fold, all the while Guardiola clings onto a hushed, behind-closed-doors patting of the back of Phil Foden.

Where Liverpool bought talented rough diamonds and added them to the crown, City lost patience. Only recently did the club sanction the sale of Danilo, a full-back Guardiola and Co. held such lofty plans for. Time, what little of it was on offer, ran out. Soon £60 million man Joao Cancelo may well meet the same fate.

How City operate and how Liverpool operate just isn’t in the same ballpark. The morals are skewed, the ethos is flawed.

The season will continue and with it so shall the press conferences and the questions.

Guardiola may have found himself inseparably bound to Klopp and Merseyside, but it’s a conundrum of his own creation.

Keep the admiration, Pep, but please drop the comparisons, they simply do not add up. Slow and steady has all but won the race for Liverpool, the perch is primed for roosting upon once more.