Timo Werner helped RB Leipzig beat Tottenham in the Champions League last 16 first leg – then spoke of his admiration for Liverpool, who he describes as the “best team in the world.”

The Reds have been continually linked with the German international, who is expected to lead the line for his national team at Euro 2020.

For now, he’s trying to see Leipzig over the line in the Bundesliga, where they sit second, and in Europe, where they now have a good chance of progressing to the quarter-finals.

On Wednesday evening Werner had himself an eventful match, scoring the penalty in a 1-0 win while also missing one great one-on-one chance, running Spurs’ defence ragged for the first 45 minutes where Leipzig could have been three up with ease and showing the untrackable movement which he has become noted for, right the way across the pitch.

The other side of his game was also on show as Spurs fought back in the second half, with Werner required to work hard, defend from the front and produce some good hold-up and link play.

After the match Werner was asked about the rumoured transfer links to Liverpool, which he said make him “proud”, but he acknowledged that he has further to go to reach his full potential. 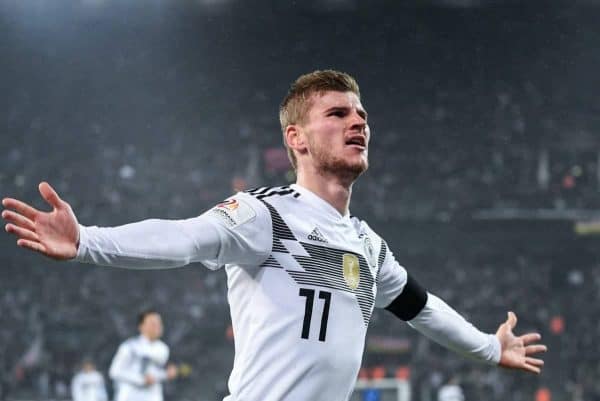 “I know that Liverpool is the best team at the moment in the world,” he told Viasport Football.

“It’s a pleasure but I know that Liverpool have a lot of good players and I have to improve myself, to learn much more things to get on this level to play there.

“When you’re linked with that team it makes me very proud.”

Most recently, talk of Werner joining has been limited to suggesting a move would only materialise if he accepted he wouldn’t be first choice immediately at Anfield.

Melissa Reddy wrote in the Independent that while his attacking talents were admired, there were no current plans to break up the established front three and so Werner—or any incoming signing—would have to be patient before getting their opportunity.

Werner’s post-game words, then, could be seen as a nod to that acceptance that he has more to learn to become such a reliable and consistent performer as Liverpool are accustomed to.

But with a release clause supposedly expiring mid-season, teams might have to decide more quickly than usual if they want Werner to be spearheading their attack next season—or in the case of Liverpool, warming the bench first.