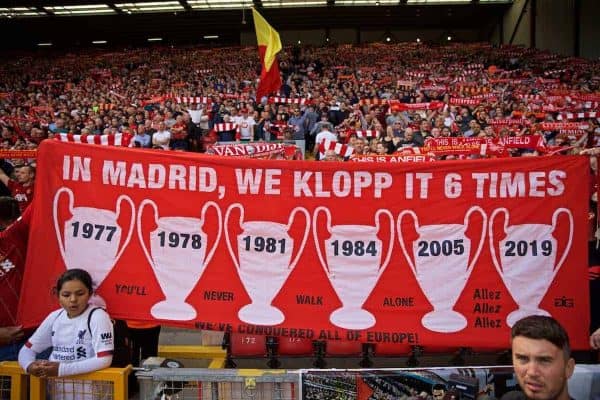 Liverpool have announced a new partnership with ticketing platform SeatGeek in an effort to solve long-standing problems with fans buying tickets for Anfield games.

With every release of tickets comes a difficult morning for supporters, waiting in online queues for hours with no guarantee of securing seats for the Reds’ next batch of fixtures.

The current credits system and the ability to buy tickets with no previous history have been the subject of frustration for too long, with fans bemoaning that there is “no reward for loyalty.”

But Thursday morning saw the club unveil plans to “transform” the current process, in association with SeatGeek.

“During the club’s future members’ sales, the new platform will offer supporters a more efficient and simplified buying experience when applying for the matches they would like to attend,” Liverpool explained.

“It also boasts a more dynamic queuing system to manage traffic volumes during busy periods and will give fans more clarity on where they are in the buying process through live updates and improved communication.

“Focused on improving the mobile fan experience, the platform not only allows supporters to purchase through their mobile devices but will also support mobile access at the turnstiles for match e-tickets for fans wishing to move away from physical paper tickets.”

SeatGeek have pledged to “deliver as efficient a sales process as possible and embrace the latest technology to streamline the process,” with the system to begin with season-ticket renewals ahead of the 2020/21 campaign.

Given the many issues with the previous setup, fans have unsurprisingly welcomed the news on social media:

We hear time and again how 'something needs to be done' about ticketing at Anfield. Something has now been done (or will be). @LFC to team up with @SeatGeek from next season.

No system can fix the biggest ticket issue – nowhere near enough seats!#LFC https://t.co/k5PbzlxGpa

Welcome news and it’ll be interesting to see how this turns out. Demand will always outweigh supply but if the process can be made smoother and more transparent then few can complain. https://t.co/VMxy0puLeY

About time, reason number one I cancelled my club membership was the absolute shambles the ticketing was each year, I mean it seemed the club was running the world-wide ticketing system off a windows 95 server, crash city. Let’s hope the new system is robust.

Well any improvement on the current shambles would be good. But this years constant "over an hour", has been incredibly frustrating. No tickets from LFC or local supporters club.

However, one fan did highlight a potential issue with SeatGeek’s servers, which arose with their efforts to provide tickets for the Seattle Sounders’ MLS Cup final clash with Toronto FC in November.

Over 24,000 supporters were queuing for tickets to the tie, which saw problems arise with detailing availability:

The LFC bulk sale is going to fry SeatGeek if they can't cope with MLS tickets. https://t.co/gKtoAWTcF4

Ultimately, however, any change to the current system should be welcomed, and particularly as it comes in partnership with a platform as well-established as SeatGeek.

The situation should be eased slightly with the expansion of the Anfield Road End, with the club expected to push forward with plans to add around 7,038 seats by the 2022/23 season.