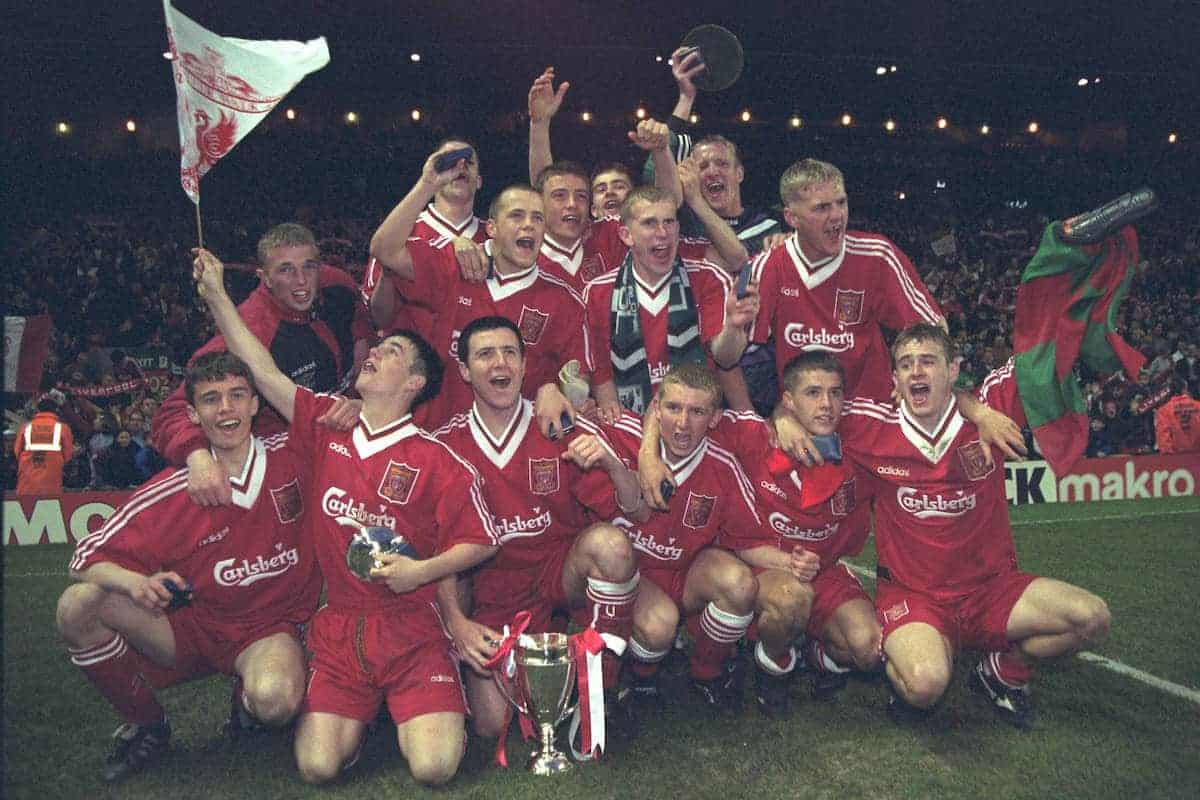 From its first introduction in 1952, the FA Youth Cup offered a series of lows for Liverpool before the greatest high in 1996.

A week after the senior side had hit the headlines for their ‘cream Armani suits’ in an FA Cup final of their own, which they would lose 1-0 to Man United, the club’s youth team were preparing for a historic final.

After overcoming the likes of Bradford, Luton, Sheffield United, Man United and Crystal Palace, Liverpool’s youth team were to face West Ham in a two-legged final.

It was the third time the Reds had made it to the final two, both had ended in defeat by the hands of West Ham and Aston Villa in 1962/63 and 1971/72 respectively. 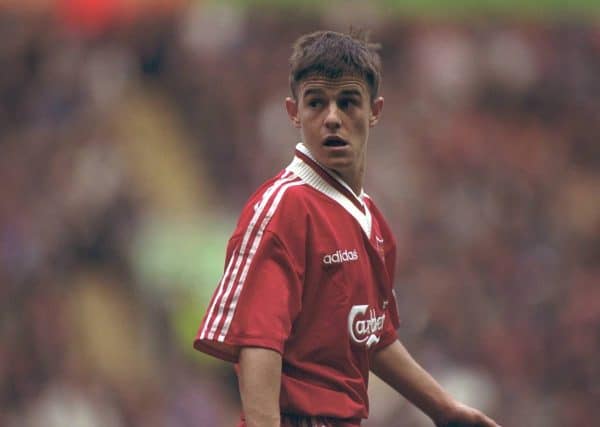 This time around there was renewed optimism that it would be third time lucky as Liverpool’s team was bursting with young and bright prospects including David Thompson, Phil Brazier, Jon Newby, Michael Owen and Jamie Carragher.

And the opposition also contained a familiar name or two, with future England stars Frank Lampard and Rio Ferdinand on hand for the Hammers.

Jon Newby and David Larmour both notched their name on the scoresheet in the first leg at Upton Park, the latter would leave the club that year while Newby would remain until 2001 before returning to join the academy in 2014.

The second and decisive leg was played out in front of a 20,000-strong Anfield crowd on a night where a 16-year-old Michael Owen would start from the off having missed the first leg due to playing for the FA’s School of Excellence.

Having relinquished a two-goal lead in the semi-final against Crystal Palace before narrowly securing a win 7-5 on aggregate, West Ham were confident they could complete the job and asked questions of the young Reds.

In the first minute, in fact. Lampard, who would many battles with Liverpool in the years to come, was the one to inflict the early damage after rifling the ball into the roof of the net.

The Reds’ lead was slashed in half and had to survive a number of scares in the early parts of the half, but Owen was intent on restoring the balance as he continued to spread fear into the Hammers’ back-line.

And his tenacious spirit would see Liverpool grab an equaliser after his pressure just outside the centre-circle saw the young Reds turn defence into attack in their forward half.

Stuart Quinn was the one to drive forward and with his shot parried into the air, Owen was the fastest to act as he pounced on the loose ball to head the ball into an empty net. 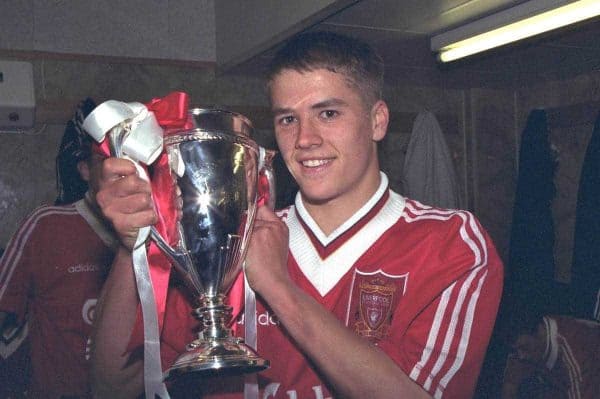 The first of many memorable goals at Anfield.

The second half saw a reversal of Liverpool’s first goal as Owen was denied first by the ‘keeper and then the post before Quinn was the benefactor as he struck truly to hand the young Reds an insurmountable 4-1 lead.

The home faithful were on their feet as the FA Youth Cup landed at Liverpool Football Club for the first time.

Phil Brazier, who was the captain on the night later recalled: “It was an unbelievable feeling.

“When you’re 18 and playing in the equivalent of the FA Cup final it’s what you dream about, playing for the team that you supported as a boy.”

Two years after the final he would be released by the club and like many of his teammates would fail to make a senior appearance for Liverpool, with only Thompson and Newby the exception aside from the two who would etch their names into Liverpool’s history books for various reasons.

Owen would go on to play for the Reds for eight years, making 216 appearances and scoring 118 goals in a run which saw him collect the Ballon d’Or and five trophies before he moved to Real Madrid in 2004.

Carragher, meanwhile, would go on to leave many ‘dreaming of a team of Carragher’s’ as he went on to be second in the list of Liverpool’s all-time appearance makers with 737 games in a career which returned nine trophies and saw him earn legendary status.

The FA Youth Cup final would be contested by the Reds a further four times until present day, the latest of which saw the club win it for the fourth time in 2018/19 against Man City.