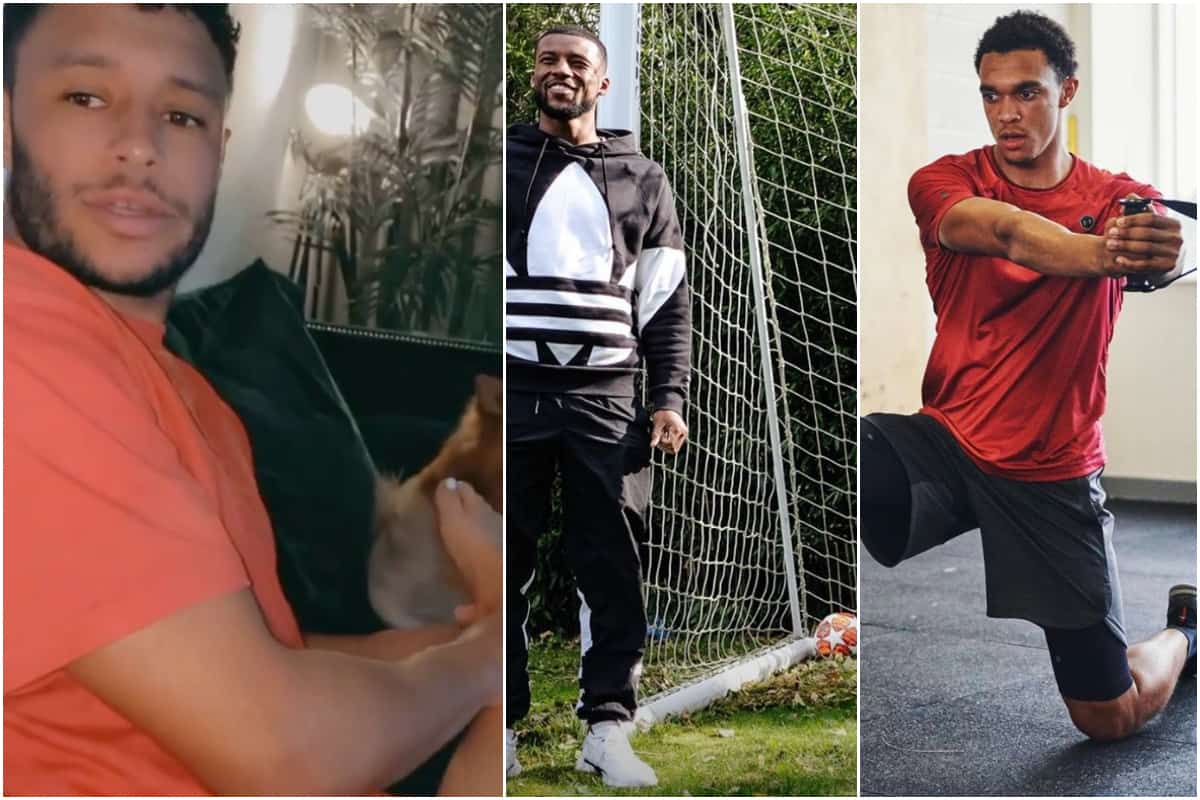 Alex Oxlade-Chamberlain had a failed attempt at a new job during Liverpool’s self-isolation, while Gini Wijnaldum saw himself banned from football inside the house.

Oxlade-Chamberlain is in his 10th season as a senior professional, and is certainly familiar with the treatment side of the sport.

The midfielder is currently in self-isolation with his girlfriend Perrie Edwards, and she shared his attempt at a new role as sports masseuse on her Instagram story.

“I thought 2020 was looking up for a second until he nearly broke me foot with his ‘sports massage’,” the Little Mix singer wrote, suggesting his qualities may be better suited to the pitch for the time being.

Wijnaldum may be required to find another pastime during this time away from Melwood, however, as the Dutchman revealed he had been banned from kicking the ball in the house:

Family says I can’t play with the ball in the house anymore ? #quarantinelife

Instead, he turned his attention to entertainment, providing supporters with his own ‘Cool Down’ playlist on Spotify with “some music for after training or just lounging around the house, as we’ll all be doing a lot these days.”

No matchdays for a while, so I’ve set up a new Cool Down Playlist ? With some music for after training or just lounging around the house. As we’ll all be doing a lot these days. ? ? I need your help to expand the playlist, please drop me your best chill music suggestions ??? Check it out with the link in my bio. I’ll be doing regular updates so give it a follow if you like it!

The playlist includes the likes of J Hus, Burna Boy, Wale and, from further back, 2Pac, and Gini added: “I need your help to expand the playlist, please drop me your best chill music suggestions.”

Each player will be undergoing their own individual training programme, and Trent Alexander-Arnold gave an insight into his regime as he worked out in his gym:

James Milner took a break from his own training to focus on his ever-impressive social media presence, following up on tea rationing and grass cutting with a pencil-sharpening session:

Preparing for home school – there will be no slacking off under Mr Milner ??? ?? #yessir #staysharp #stayindoors

“There will be no slacking off under Mr Milner,” with schools closing in the UK and the vice-captain required to keep his children occupied while they are all at home.

Meanwhile, Pedro Chirivella shared photos from his native Spain, writing “in these days of uncertainty, I want to send encouragement to all those people who are having a hard time”:

“We have been tested as a society and we have to be responsible so that everything can return to normal as soon as possible,” he continued.

“THANK YOU immensely to the health services and to all those people who work during these days to take care of us and our families.”

Chirivella’s message is apt, as though the Liverpool squad are currently unable to play, or even train at Melwood, the priority is the wellbeing of the public.