Three defeats in four games is a lot to take in after going unbeaten in the league for more than 13 months, but now is the time for perspective, not panic.

The wheels are having a bit of a wobble it seems.

I mentioned after the Watford defeat that the Liverpool of old used to respond to losses in one of two ways.

Either they would launch themselves into another long unbeaten run, or it would mark the beginning of a short cluster of reversals, before stern and frank words were exchanged, between manager, coaching staff and players.

This would affect a clearing of the air and normal service was immediately resumed.

At Stamford Bridge, the line-up selected had a few changes here and there, but contained enough ‘A-listers’ to be classed a continuation of the campaign, off the back of defeat at Vicarage Road.

Sometimes, a domestic cup tie can act as a ‘temporal hop’, just as the FA Cup games against Shrewsbury Town and Everton did, at Anfield. So many changes are made, that it isn’t reasonable to claim it is the same team that played in the previous game.

Upon this occasion, that rule wasn’t applicable. While seven changes were made to his team by Jurgen Klopp, of the 13 who played an active role against Chelsea on Tuesday evening, nine had made an on-pitch contribution at Watford on Saturday.

This isn’t a defeat that can hide behind the façade of domestic cup ‘temporal hops’. 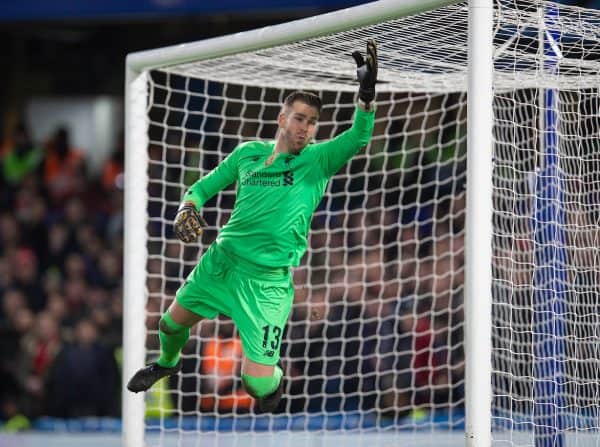 It was a decent line-up; it was a line-up that suggested a piqued interest in the competition.

In part, it was a tale of two goalkeepers.

Chelsea’s opening goal, via an unforgiving pass from Neco Williams, Fabinho’s error and the ball bouncing in off Adrian – just after Liverpool’s back-up keeper made an impressive block – was both unfortunate and avoidable.

In turn, Kepa Arrizabalaga soon made an outrageous triple save.

At 1-1, while the outcome might still have been a Chelsea victory, it would have made for a very different remainder of the game.

Liverpool were well within this game for around an hour. They moved the ball swiftly and tried to open Chelsea up. For 60 minutes it was a compelling riposte to the tired performance they had put in at Watford.

Ross Barkley’s goal, Chelsea’s second, put an end to notions of Liverpool overturning the deficit, however. From there, it was a different kind of task: the home side hitting on the break and looking likely to score again.

The crossbar was clipped, when Adrian got a touch to an effort from Olivier Giroud, while he was forced into another smart save earlier on. Again, an opposing team sensed blood in the water and they went for it.

Joe Gomez returned, we were spared Dejan Lovren, but it was Gomez’s indecision that almost presented Chelsea with a third goal, when Pedro charged through, directly from a Liverpool corner.

Poor refereeing blighted Liverpool throughout, which simply added to frustrations.

For the nervous of disposition, the self-destruct button is tempting. I wouldn’t sweat too much at the minute though.

It isn’t about attaining perfection. Unbeaten league seasons, domestic trebles, longest winning streaks, 100+ points; each of them are nice baubles, but this is all about Liverpool getting that 30-year-old league title monkey off their back.

It is all about opening the floodgates. Because, if this Liverpool wins one Premier League title, it will win a run of them over the course of the seasons to come.

The great Liverpools of the past suffered flutters, as do most teams when heading towards the promised land. It also isn’t as easy as it looks, to be so far ahead of the rest of the field. The 1987/88 vintage – as good as they were – won only four of their last 12 in the league.

In more contemporary times, the Manchester City of a couple of seasons ago, the 100-point team no less, were upset by a week where they were taught a set of Champions League lessons by an uprising team in red, hailing from the Merseyside area, either side of losing at home to Man United, not all that long after being tipped out of the FA Cup at Wigan Athletic.

Nothing in football is new.

The storylines are reheated and played out in a different stadium. You absorb the blows when they land, readjust and then keep on moving forward.

Liverpool need to readjust quickly though, if they are to clinch the title with breathing space to spare, and to make a determined attempt at retaining the Champions League.

Bournemouth will pose questions on Saturday and beyond them lay Atletico Madrid. Then comes the Merseyside derby, at Goodison, followed by the visit of Roy Hodgson and Crystal Palace.

Four games between now and the next break in play. Several statements of intent can and need to be made, but it is no time for panic.