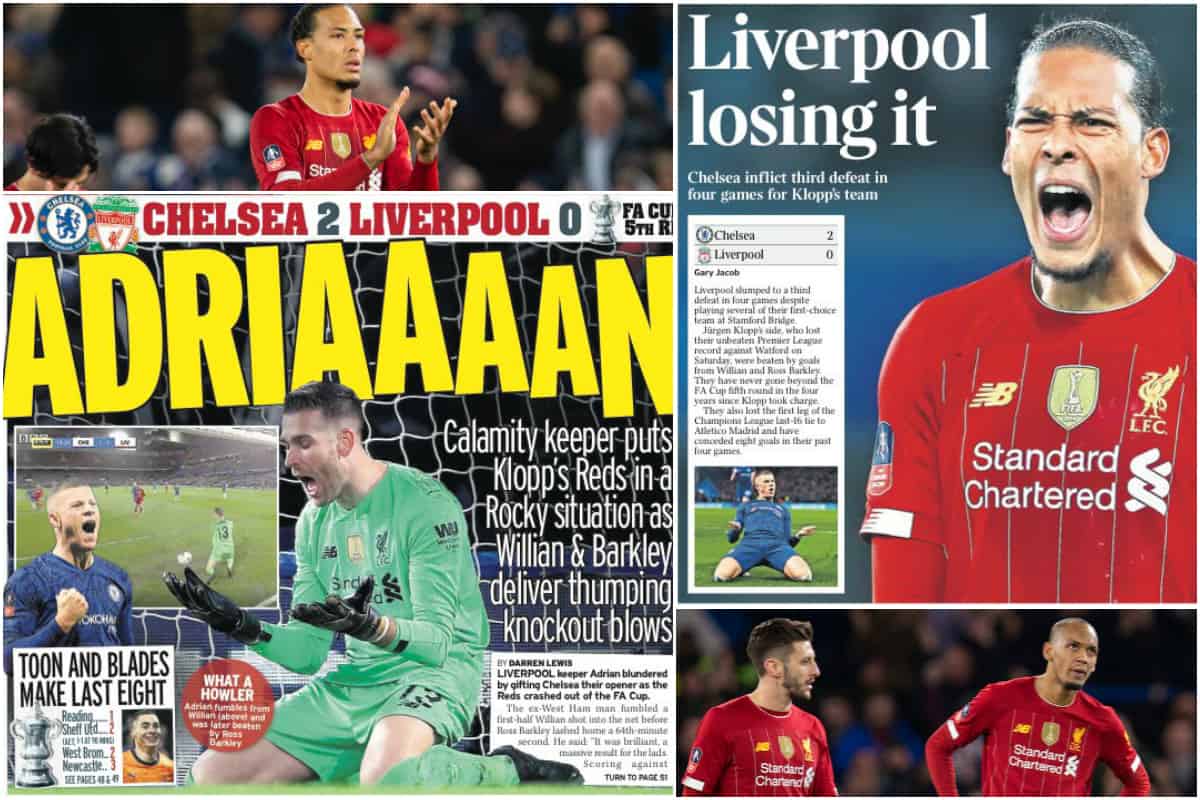 The media described Liverpool as “unrecognisable” after the 2-0 FA Cup loss to Chelsea and feel the Reds may have been sussed out.

Ambitions of a dream treble were ended at Stamford Bridge as the Reds’ dip in form continued with a third loss in four games.

The big response expected to defeat at Watford didn’t arrive, and Liverpool were punished for another flat display with goals from Willian and Ross Barkley taking Chelsea through.

A vast improvement will be needed in order to bounce back against Bournemouth on Saturday, but before focus turns to that game, here’s how the media assessed the FA Cup exit.

ESPN’s Tom Fenton thinks that a relentless season is now catching up with the Reds:

Perhaps understandably so, given the amount of football they have played this season, but the travelling side looked uncharacteristically flat on this night.

The Liverpool Echo’s Ian Doyle stated that Klopp’s side “have become unrecognisable” and listed four big problems that the Reds are currently struggling with:

Defensive indecision. A midfield muddle. A lack of energy. And, perhaps most worryingly, an inability to score.

The Reds have become unrecognisable. Their identity now is one that needs shedding – immediately.

The Guardian’s Barney Ronay thinks it’s a case of opponents having worked out how Liverpool play, seeing as recent defeats have all arrived in a similar manner:

Even, whisper it, of some more systemic vulnerability being winkled out.

The answer, English football seems to have concluded – belatedly, Napoli might say – is you close down the full-backs. Take the flanks. Win wide. Hope they don’t score first. Stick to the plan.

Chelsea came to Stamford Bridge with something similar in mind. They packed the central midfield, pressed hard on the flanks and took their chances.

Standard Sport’s David Lynch bemoaned how Liverpool have fallen back into their old ways of being unable to conjure up the necessary ingenuity and craft required to break down stubborn defences:

Liverpool haven’t spent much time behind in games this season, and it is just as well judging by their recent performances.

As was the case at Atletico Madrid and Watford, the Reds fell apart here once they were asked to break down opposition with a lead to defend.

Lynch also explained how Klopp’s men need to retain greater tactical discipline when trailing in games, noting that the Reds are currently too quick to panic:

From there, the visitors just got worse and worse, ending the game as deserved losers when they had started proceedings at least as impressively as their hosts.

Klopp cannot be happy seeing his team resort to hopeful punts forward and questionably patterns of play whenever things aren’t going their way.

The recent defeat has seen Liverpool completely lose their aura, which has encouraged to take a more courageous approach to trouble the Reds, in the view of the Telegraph’s Sam Wallace:

Fifteen days, to be precise, in which Liverpool have lost in the Champions League, the Premier League and the FA Cup which has done little to alter their course in the competition they prize above all, but has at least diminished the aura that they have cultivated in previous months.

And Lynch, among others, was quick to point out just how heavily Jordan Henderson’s absence has been felt:

But how can anyone have watched their recent games and not feel like Jordan Henderson’s absence has been a key factor?

The Reds captain sets high standards on the field, eats up second balls, and is careful but incisive with his passing from central areas – all things that have been lacking of late.

The Independent’s Miguel Delaney thought that the overall display was encouraging, noting that Klopp’s side were improved in their attacking play:

It wasn’t one of Liverpool’s best performances, but they were far from bad. Such passages of pressure indicated their attacking play was as pulsating as ever, with some deft touches in small spaces amid the frenetic intensity of this cup tie.

That is why, for all that will be read into this final result with a different starting XI, there wasn’t that much off about the actual play. […] On a different night, with the goalkeeper on the different form of two months ago, it might have been a very different outcome.

Ronay assessed that only some wayward finishing prevented Liverpool from taking the result, and is in no doubt that the Reds will soon be back to top form:

Liverpool played well in patches and might have wrenched the game their way with better finishing.

This team are too good not to adjust and find their rhythms again.

The BBC’s Phil McNulty pointed out how the FA Cup has proved a useful exercise for Liverpool and Jurgen Klopp this season as it has allowed certain youngsters the chance to shine:

It has been an unusual FA Cup campaign for Liverpool, with a scratch side full of youngsters winning a Merseyside derby against Everton in the third round, then effectively a youth team beating Shrewsbury Town in a fourth-round replay at Anfield while Klopp and his senior players enjoyed a winter break.

Liverpool and their fans have been given a glimpse of the talents of youngsters such as Curtis Jones and Neco Williams but this was the end of the line.

Looking ahead, Lynch reckons the Reds now have an ideal fixture to bounce back in against Bournemouth, and called on Liverpool to deliver a big performance to move out of the rut:

Liverpool have won their last five meetings with the Cherries by an aggregate scoreline of 17-0 and will be confident of extending their good run on Saturday.

A comfortable win is exactly the tonic these players need after the most testing period of their season thus far, and would bring an end to the franky ludicrous suggestions that this recent wobble threatens their hopes of Premier League glory. You wouldn’t want to be Eddie Howe and co as they prepare to travel to Merseyside this weekend.

Meanwhile, the Mirror’s Patrick Gillen thinks Liverpool’s reaction to his slump could provide an indication on whether this team has the mentality required to dominate in the long-term:

Until now Jurgen Klopp has been able to send his boys out with the instruction to ‘pick up where you left out last time’, but it’s a little more complicated now. Liverpool are vulnerable. They’re lacking confidence, seemingly out of ideas, and defensively shaky.

The title may well be wrapped up this season, but if this Liverpool team are going to dominate for years to come, in the way pundits have been suggesting they will, Klopp needs to find a tonic – and soon.

The Liverpool Echo’s Paul Gorst thought Fabinho had another poor outing, but believes the Brazilian must keep his place in the team in order to play his way back to form:

The Brazilian was in superb form prior to that ankle ligament issue at the end of November and he has struggled to reach those heights since his comeback in January.

Liverpool have a class act in the £40million man, but he has not been at his best in recent weeks. ‘Rhythm’ is likely to be Klopp’s answer to solve that particular puzzle.

Gillen was impressed by Neco Williams once again and believes that the right-back will provide a perfect alternative to Trent Alexander-Arnold in the not too distant future:

One of only two Liverpool youngsters to get the nod, Neco Williams once again did his chances no harm with a fiery display at right-back. He’s impressed each time he’s pulled on a red shirt this season, though this was definitely a step up in class.

Whilst Trent Alexander-Arnold has got the full-back slot nailed for the foreseeable future, you can expect Williams to put up a solid challenge in the coming years.

Fenton thought Takumi Minamino “showed glimpses” that he is now adapting well to Liverpool’s style and the role of Roberto Firmino’s stand-in:

Takumi Minamino also showed glimpses of his true ability, after some fine link-up play with Mane almost yielding a goal.