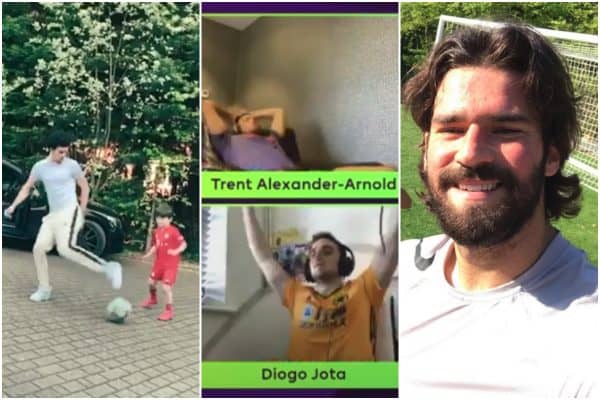 Liverpool’s stars have taken to social media as the weekend begins, offering up challenges, successes and recollections of the season as the lockdown continues.

The Reds squad is still training in isolation, gathering on video chats for group sessions where possible and trying to maintain levels of fitness so they are ready if and when football gets the go-ahead to resume.

For now, though, it’s much the same as the rest of us: doing what needs to be done and finding ways of entertaining themselves and others.

Trent Alexander-Arnold has spent part of this week representing Liverpool in the ePremier League Invitational tournament on FIFA 20, whereby a player from each club in the top flight has competed for the honour of the league’s best player and some kudos with the fans…of a particular demographic, at least!

Our No. 66 had already beaten Man United and Newcastle before facing Raheem Sterling of Man City in the semis on Saturday; Trent fell two goals behind but forced the game to extra time—and won 3-2 with a quick golden goal.

In the final itself he came up against Wolves‘ Diogo Jota—but despite taking the lead, he succumbed to an eventual golden goal loss of his own.

Elsewhere on social media, our goalkeeper Alisson shared a snap of himself taking a break from training in the garden with coach Joao Pedro.

It’s great to see Ali back after injury but the highlight, though, might just be a cheeky reply from former Brazil No. 1 Taffarel: “Go back to training and stop taking selfies!”

Two of our younger continent fancied getting a challenge or two on the go, clearly missing the competitive spirit which training and matches bring.

Pedro Chrivella apologised to the neighbours, but said it had “been too long” without kicking a ball as he practiced some two-touch up against the wall.

Curtis Jones went one further, telling fans to reply to his own “megs at home challenge” where he performed a few nutmegs on unsuspecting members of his family.

No mercy was shown by the precocious starlet as he sent the ball through the legs of a toddler on more than one occasion—can you do any better?!

Megs At Home Challenge, how many can you get??? Tag me in yours??

Finally, Gini Wijnaldum took a break from the football talk to invite fans to check out his updated music playlist.

Playlist update ? Some great new music??Check out these latest tracks on my Cooldown Mix here https://t.co/JdqQ3P0GmM

Needless to say, he must be missing the on-pitch action a little: he also shared a video from the Euro 2020 account of one of his goals for Netherlands in qualifying, a real rocket from range.

A couple more of those at club level once we get up and running again wouldn’t go amiss; Gini scored in our last match against Atletico Madrid and whichever player scores the goal to seal the title for 2019/20 will surely go down in Anfield history!