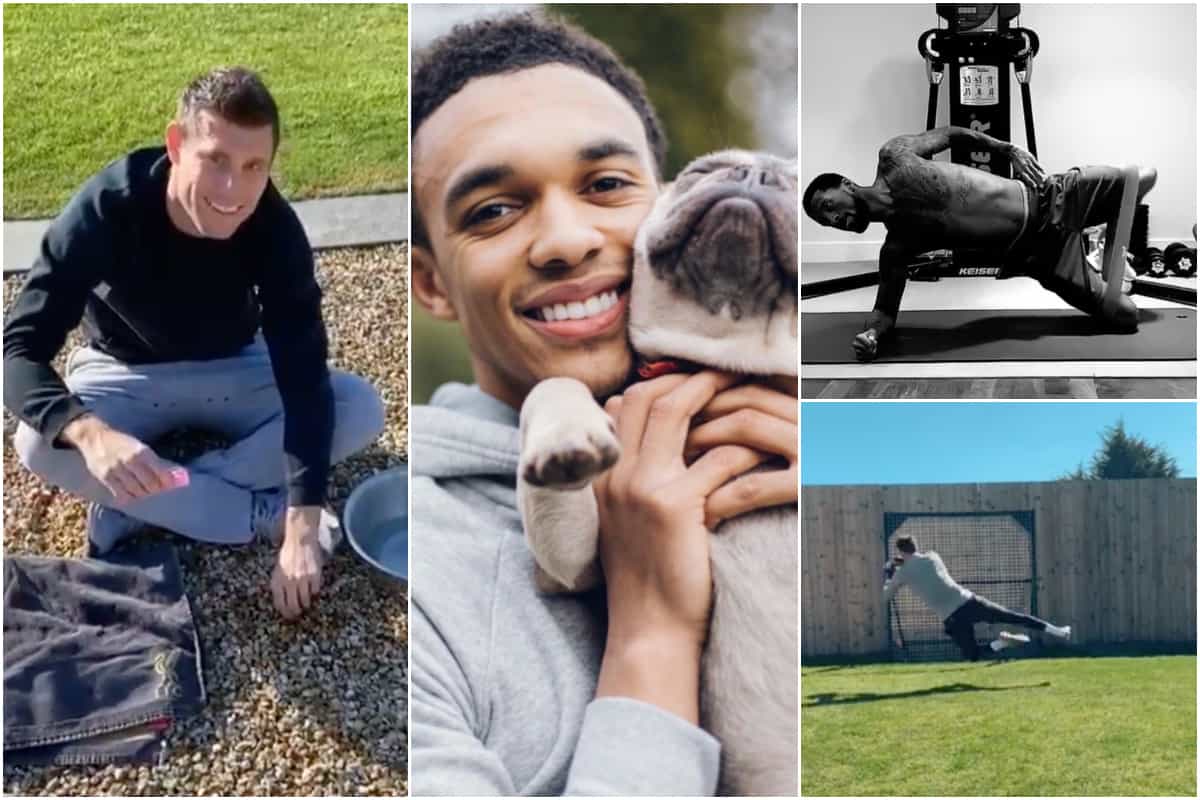 James Milner has made his return to Instagram comedy after a week-long break, while Trent Alexander-Arnold revealed his “number one” is not, in fact, Andy Robertson.

Liverpool’s vice-captain has gained a reputation as an entertainer during the current lockdown, with his ‘Isolation XI’ proving particularly popular, sparking copycat versions across social media.

Milner made his last contribution with a “speedy skills session” on April 7, before an interval that saw him join the rest of the Premier League players in the #PlayersTogether announcement last Wednesday.

But now he has returned to Instagram with another mundane chore, with the 34-year-old claiming “I think maybe Mrs M wants me out of the house for a while”:

On to the first on my new list of chores… I’m not 100% sure but I think maybe Mrs M wants me out of the house for a while ????? #stonemethiswilltakeawhile #easytomissone #maybeifigravelshewillletmeoff #staysafe

The hashtags, #stonemethiswilltakeawhile and #maybeifigravelshewillletmeoff, are typical Milner humour, with the midfielder playing up to his age to adopt the dad jokes.

Elsewhere, over Easter, Trent shared a photo with him and his “number one,” with this being his pet dog, not Robbo:

“Easter is ruined,” replied the Scot, following an apology from his fellow full-back.

Meanwhile, Adrian shared an example of his new training programme, which goalkeeping coaches John Achterberg and Jack Robinson have specially tailored to allow the Reds’ stoppers to continue drills at home:

The Spaniard was briefly interrupted by his son, but showed some strong reflexes as he caught a number of rebounds off his garden fence.

Gini Wijnaldum provided a video of his own regime, asking supporters “how are your home workouts going?”:

#Stayhome stay fit pt. 2 ?? How are your home workouts going?

And Dejan Lovren was more philosophical with his contribution, insisting “everything happens on a mental level before it manifests on the physical level”:

Everything happens on a mental level before it manifest on the physical level. This is why it’s so important to get your mindset right. You have to believe in yourself no matter what the external circumstances are. Strengthen your vision and have hope that things can get better.

“This is why it’s so important to get your mindset right,” he wrote. “You have to believe in yourself no matter what the external circumstances are.”

Easter Monday brought Neco Williams‘ 19th birthday, and the right-back took to Instagram to thank supporters for their messages and reminded that “we’ll be back on the pitch when it’s safe to do so”:

Thank you for all the birthday messages?? , hope everyone’s staying safe at these difficult times ! we’ll be back on the pitch when it’s safe to do so?? #stayhome #birthday

And finally, Jamie Carragher posted a brilliant outtake from Sky Sports’ latest video interview, with a candid shot of Graeme Souness in his natural state from before filming:

Souness angry before we start! 9:00 @skysports

In an interview with LiverpoolFC.com on Monday, Jurgen Klopp stressed the benefits of social media and technology in the current climate as “a big difference.”

“That’s the best thing of having this situation in 2020—we have this technical opportunity,” the manager explained.

“Imagine if we would have had that in the ‘80s or something like that, it would have been really crazy.

“Not because of football, because of all the social contact and interaction we can have and use in the moment. That makes a big difference.”