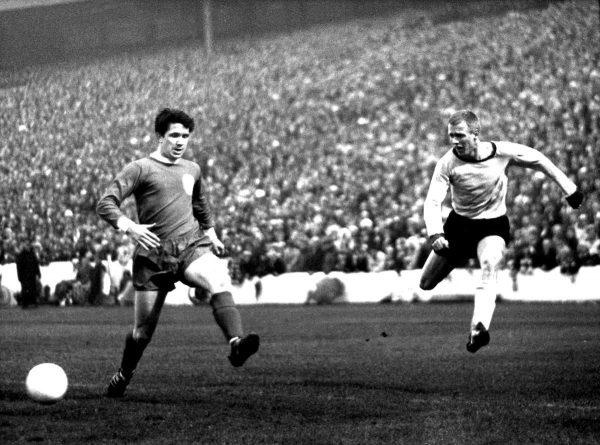 Before Liverpool conquered all of Europe they first endured the taste of defeat with silverware on the line, with Borussia Dortmund dishing out the first setback in 1966.

Hampden Park was the location and a European trophy, the first in Liverpool’s history, was the objective as Bill Shankly and his Reds made the trip to Glasgow.

Borussia Dortmund were the opponents, the European Cup Winners’ Cup the competition for Liverpool on an evening where history could be made with a league and cup double.

Five days prior to the European clash, the league title was clinched with a 2-1 win over Chelsea, the seventh added to the trophy cabinet, meaning Shankly’s men were riding high on confidence.

In the preceding September, Borussia’s vice-president had conceded that the Reds were the team he feared most in the competition, but the Germans themselves were no walkovers.

They boasted five German internationals and had dispatched reigning champions West Ham in the semi-final, whereas Liverpool’s passage into the final two saw Celtic toppled over two legs in what was a dramatic and raucous 2-1 win on aggregate.

Torrential rain met them on the morning of the match on May 5, 1966, but it failed to deter 20,000 Reds from descending on Scottish soil, of whom significantly outnumbered the opposition.

The conditions, amid of myriad of other factors including Celtic’s absence, however, saw the 130,000-capacity stadium restricted to a shadow over 41,000.

After missing out on their first-ever European final in what was their debut campaign on the continent the year prior due to a host of contentious decisions from the referee against Inter, the encounter signalled yet another indisputable step towards Shankly’s vision of building “Liverpool into a bastion of invincibility.”

It would again end in disappointment, however.

The first half would not return any goals and while the Reds enjoyed the lion’s share of possession, it was Borussia who created the openings.

Liverpool’s ‘flying pig’, Tommy Lawrence was called in to make decisive interventions and Ron Yeats was instrumental in commanding the back-line despite being tasked with nullifying the threat of German international Siegried Held.

“I could not help but be impressed by the technical ability of the Germans. They moved the ball about with confidence and accuracy and if Yeats had not been having one of his best night I fell they must have gone ahead by the interval,” a reporter would determine.

“Defencemen on both sides had clearly been drilled to such a degree that they made not a single mistake and all the chessboard stuff took place in the space between the two 18-yard lines,” was how another would asses the first 45.

But after emerging from the interval, Liverpool would go on the front foot and place the pressure on Borussia’s doorstep, only for one lapse in concentration to hand the Germans the lead.

Held was the man to etch his name on the scoresheet after dispatching a left-foot shot into the roof of the net, a goal Gair Henderson described as the “one of the greatest seen at Hampden Park” for the Evening Times.

Shankly’s giants would not wilt and they were to be rewarded merely seven minutes later as the prolific Roger Hunt, who would win the World Cup with England later that year, found the net with a left-footed shot of his own.

The Germans would argue the ball gone out of the play in the build-up but the goal stood and set up a nervy end which would lead to an uncharacteristic decision by Hunt.

With just minutes left on the clock Ian St John had sent the forward through on goal with only the ‘keeper to beat and instead of unleashing a shot at the first opportunity he opted to round Hans Tilkowski.

He was denied and while later admitting that, “thinking back I think I should have hit it first time, but I did what I thought was the right thing at the time,” it was a decision he would be left to rue as the game was to be decided in extra-time.

The Reds remained the aggressors, only to come unstuck to Reinhard Libuda who lobbed the ball over the on-rushing Lawrence to clip the post before deflecting into the net off Yeats who had desperately rushed back to intervene.

There would be no comeback, no penalties and ultimately no European Cup as the Germans “held out against everything that Liverpool could throw at them – and everything was thrown at them.”

Liverpool would toil in Europe for a further seven seasons, but a humbling defeat at Ajax the following campaign would lay the roadmap for success on the continent.

In 1973, the Reds would mark their first European success with the UEFA Cup, the first and last with Shankly at the helm, but what was to follow in the next 46 years was down to the humble beginnings of him and his men.