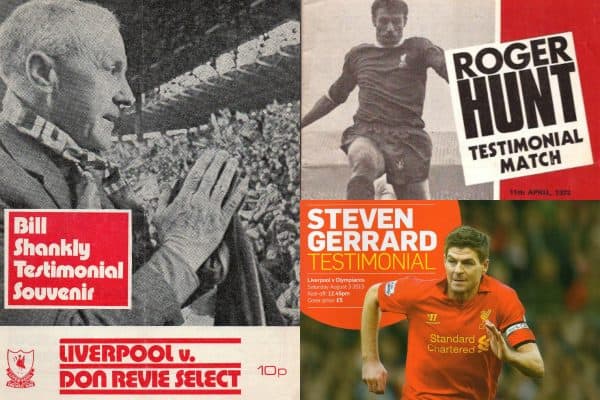 Liverpool’s involvement in testimonial games has dried up in recent years, but there have been many memorable charity ties in the club’s 128-year history.

The Reds have been involved in a total of 86 testimonial games over the years, with the commemorative friendlies traditionally organised to mark a player passing the 10-year mark at the club.

Since 1893, the most-frequent opposition in these clashes has been Celtic—a total of six times, just edging Everton (five), though various sides from Brighton have also been involved six times combined.

The most recent saw Steven Gerrard’s testimonial played at Anfield in 2013, but with Jordan Henderson set to reach 10 years at the club in 2021, there could be another on the horizon.

Perhaps Liverpool could take on Sunderland, possibly in a pre-season game at Anfield—or at the Stadium of Light, allowing the current League One side to raise funds in the aftermath of a difficult time for lower-league football.

That all remains to be seen, and for now, we’re taking a look back at 10 testimonial games from Liverpool’s history.

Twenty-two years after joining Liverpool, Liddell’s testimonial was played at Anfield against an international XI that included the likes of Jimmy Armfield, Nat Lofthouse and Tom Finney.

The absence of Stanley Matthews—his name allegedly on the initial billing so as to drum up further interest—saw Liddell line up for the opposition, on a night that saw 38,789 fans help raise £6,340 for the legendary winger’s retirement.

Liddell opened the scoring within four minutes, with Lofthouse grabbing the visitors’ second but Liverpool emerging as 4-2 victors courtesy of an Alan A’Court strike and a hat-trick from Dave Hickson.

Such was the support for Liddell throughout a lighthearted affair that the Kop was left booing their own goalkeeper, Bert Slater, as he continually denied his team-mate a second goal.

Liddell addressed the supporters after the game, delivering an impassioned speech on his reception and his hopes for Liverpool’s future.

“I want to tell all you Liverpool supporters what a wonderful thing it has been to have your support and I hope to be able to play a few more games for you yet,” he said.

“I would ask you to show the same enthusiasm to the rest of the team as you have done for me. If you do that, we can put Liverpool back where we belong in the First Division.”

Liverpool finished third of the Second Division in 1960/61, with Liddell retiring at the end of the campaign; he would watch as they secured promotion to the top flight as champions the following season.

Hunt returned to Anfield in 1972 as a Bolton player, having joined the Wanderers in 1969, but was understandably revered as he held the club’s all-time goalscoring record with 285—a feat now surpassed by Ian Rush.

For the legendary striker’s testimonial, the Reds’ FA Cup side of 1965 took on an England XI largely comprised of the 1966 World Cup-winning squad, along with a current Liverpool player in Kevin Keegan.

Hunt scored the first goal of the night, and would go on to bag a hat-trick as Liverpool scraped through as 8-6 winners, with goalkeeper Tommy Lawrence also scoring from the penalty spot.

At half-time, Bill Shankly and his coaching staff took on a side affectionately dubbed as ‘old-timers’, as they entertained a crowd of 56,214.

Yeat’s testimonial saw two of the best clubs in the UK pitted against each other, as Liverpool’s FA Cup winners of 1974 took on Celtic’s First Division champions and Scottish Cup winners.

The Scotland centre-back had left the Reds at the end of the 1970/71 campaign, going on to serve as player-manager at Tranmere, and his side included the retired trio of Tommy Lawrence, Ian St John and Roger Hunt.

Celtic were missing a host of players too, of course—not least Kenny Dalglish—but made up for it with the addition of Sir Bobby Charlton, and they made their superiority felt in a 4-1 victory over Liverpool.

Tranmere’s Robert Tynan, a guest for the night, netted the only goal for the Reds, which came with the scores already at 4-0.

A disappointing result, perhaps, but with around 28,000 in attendance, the testimonial raised close to £15,000 for Yeats, who had served Liverpool with distinction over 10 years as a player, and would later return as chief scout in 1986.

In a rare occurrence in terms of testimonials, Liverpool held a charity clash for Shankly, 10 months after his retirement from the managerial post.

“I’m simply looking forward to going to Anfield to see the people I worked for all those years, who mean so much to me,” Shankly said before the game, held three days after the end of the season.

Liverpool had finished Bob Paisley’s first campaign second in the First Division, and Shankly’s side was comprised of many of his former charges, along with recent additions Phil Neal and Terry McDermott.

They took on an XI selected by England manager Don Revie, which included the likes of Gordon Banks, Alan Ball and Liam Brady, in front of a crowd of around 40,000.

The Reds won the game 6-2, with Jimmy Case and Emlyn Hughes both scoring braces while Tommy Smith and Alan Waddle were also on the scoresheet.

One fan in attendance told LFCHistory that “grown men [were] openly weeping” as Shankly addressed them over the tannoy at full-time, with Anfield’s respect for their legendary manager unequivocal.

An 18-goal thriller, Smith’s charity friendly in 1977 remains the highest-scoring testimonial in Liverpool history—edging out the 8-8 draw played out for Gerry Byrne, Hunt’s 8-6 win over England and an 8-7 victory over Keith Kennedy’s Bury.

Writing for the Guardian, Patrick Barclay described it as “[not] so much a football match” than “a celebration of Liverpudlianism,” with Smith himself promising, via his column for the Liverpool Echo, “a night to remember.”

Played against a side led by Bobby Charlton, it was far from a normal game of football—with Ray Clemence, Liverpool’s No. 1, ordered to start up front as Emlyn Hughes took up duties between the sticks for the night.

Clemence scored twice, with Jimmy Case, David Fairclough, David Johnson, Kevin Keegan, Terry McDermott and, of course, Smith himself—who netted a brace, including, in Barclay’s words, a “dubious” penalty to level the tie at 9-9 late on.

Over 35,000 supporters attended Anfield for Smith’s testimonial, which raised around £35,000 for the defender, who left Liverpool in 1978 and retired a year later.

Two years after donning the gloves for Tommy Smith’s testimonial, and on the eve of a move to Wolves, Hughes was given his own charity tie.

It came against familiar opposition for the time, with Liverpool having played Borussia Monchengladbach five times over five of the later years of Hughes’ lengthy spell on Merseyside.

Gladbach were, of course, the side the Reds defeated to win their first-ever European Cup in 1977, along with in the semi-finals of the same competition the following year, on their way to back-to-back trophies.

Kenny Dalglish missed the friendly due to injury, but Howard Gayle made his first appearance for Liverpool as a second-half substitute, in a game that ended 1-0 to Gladbach.

The testimonial, along with various other charity functions, raised around £100,000 for Hughes upon his retirement, which came in 1984 after further spells with Rotherham, Hull, Mansfield and Swansea.

Dalglish brought to an end a legendary playing career with Liverpool in 1990, making a sole appearance in the 1989/90 campaign that saw the club lift its last top-flight title.

Three months later, the King was given his testimonial, with Real Sociedad the opposition and John Aldridge among their number, having joined the Spanish club the previous summer.

Liverpool’s lineup was one typical of the time, including the likes of Ronnie Whelan, Steve McMahon, John Barnes and Ian Rush, who Dalglish joined up front in his quest for a final goal in front of the Kop.

It never came, unfortunately, with the closest the manager came being with his final action of the game, when he was caught offside but, with the opportunity too tempting, sent it past the ‘keeper before being replaced by Peter Beardsley.

Ultimately a goal from McMahon and two from Rush would seal a 3-1 victory for Liverpool, on a memorably night for Dalglish.

After 46 years of service to Liverpool, in which he filled almost every role possible, Moran was given the most fitting sendoff possible with a testimonial at Anfield in 2000.

The opposition were Celtic, and before the game five European Cups—four Liverpool’s, one Celtic’s—were paraded around the Anfield pitch by club legends Phil Neal, Bruce Grobbelaar, Steve McMahon and Ian Rush.

An emotional ‘You’ll Never Walk Alone’ rang out ahead of kickoff, and groundstaff reported seeing the new Anfield Road end moving under the weight of the bouncing Celtic supporters before the game.

This prompted further structural work to the stand to reinforce the new upper tier.

The game ended 4-1 to Gerard Houllier’s side, with Erik Meijer scoring twice—equalling his goal tally from his 27 competitive appearances for the club—while David Thompson and Titi Camara also netted.

Held during the international break, towards the start of Roy Hodgson’s season in charge, Carragher’s testimonial saw him line up for Liverpool against the side he supported as a child, Everton.

The No. 23 also ended the 4-1 win having scored for both sides, with both goals coming from the penalty spot—the latter, for the Blues, coming immediately before substituting himself.

Carragher’s squad for the tie was a strange one, including a host of youngsters—such as Conor Coady, Jon Flanagan, Raheem Sterling and goalscorer Nathan Eccleston—along with a clutch of returning players.

Among those were Emile Heskey, Michael Owen, Luis Garcia, Steve Finnan and Gary McAllister; Steven Gerrard played for 10 minutes, too, despite being on international duty with England.

Garcia and Joe Cole joined Carragher and Eccleston on the scoresheet, with a crowd of 35,631 watching on and over £1 million raised for the defender’s 23 Foundation, benefiting charities in Liverpool.

Liverpool’s most recent testimonial came in the summer of 2013, as part of pre-season preparations for a campaign that ultimately saw Brendan Rodgers’ side challenge for the title.

Held for Gerrard, it saw the midfielder take on a side against whom he scored one of his most important and iconic goals, with Olympiakos making the trip to Anfield.

The squad was that which would head into the new season, albeit with Robbie Fowler also joining on the substitutes’ bench, with Iago Aspas starting up front.

Played in glorious sunshine, the tie was decided by goals from an unlikely duo in Joe Allen and Jordan Henderson, with Fowler playing the final 17 minutes after replacing Raheem Sterling.

Gerrard was brought off with five minutes to play, and was given a standing ovation from a 44,362-strong crowd at Anfield.

The testimonial finished at 2-0 and raised £500,000, which Gerrard donated to the Alder Hey Children’s Charity later in the year.