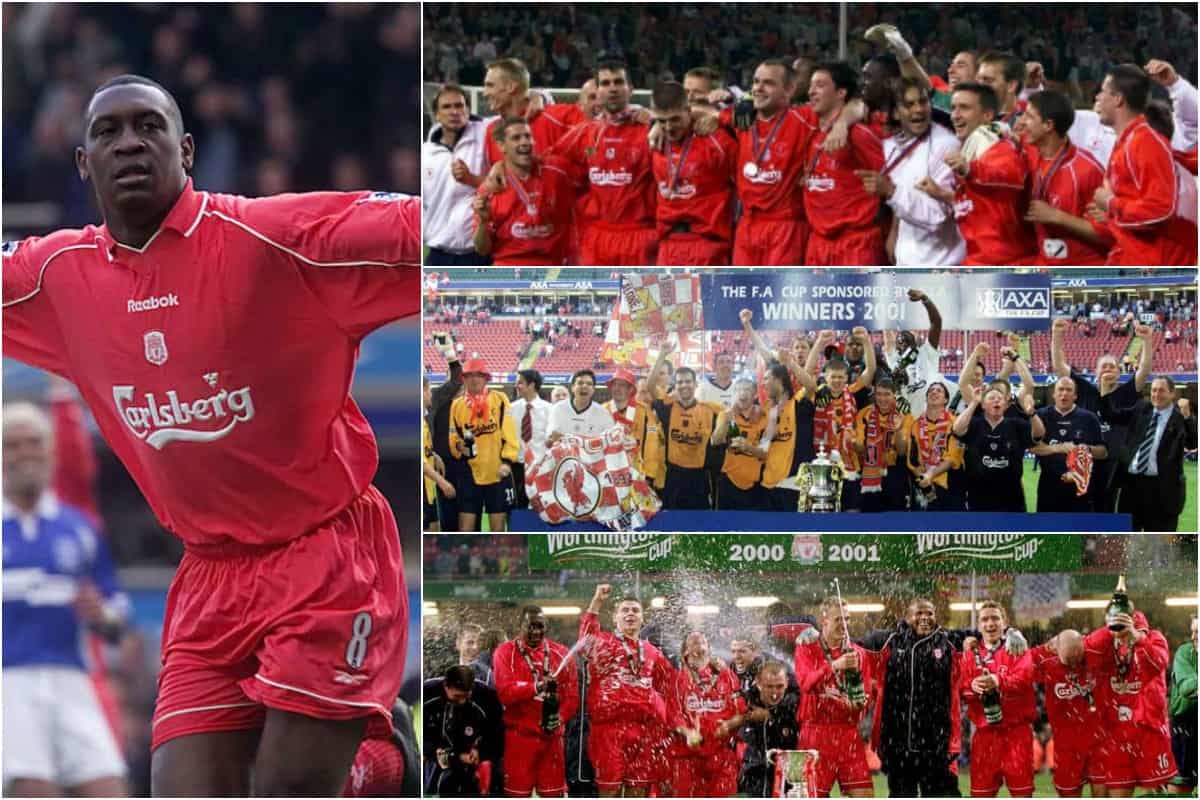 2001 was a special year for Liverpool FC, winning five pieces of silverware in six months. Emile Heskey was a key player for Gerard Houllier’s side and tells his story.

Just seven days and eight minutes later, Gerard Houllier’s side had added the FA Cup and UEFA Cup to the trophy cabinet and qualified for the Champions League for the first time since its rebranding in the early nineties.

“It was crazy the whole season,” recalls Emile Heskey, who featured in 56 of the record 63 games the Reds played in the 2000/01 treble cup winning campaign.

“Even after winning the League Cup [in February] we couldn’t celebrate.”

Between that League Cup victory and the end of the season, Liverpool played 20 more games, including a UEFA Cup semi-final victory over Barcelona and a 3-2 last-gasp Merseyside derby win at Goodison featuring that Gary McAllister free-kick.

“I think only Gary Mac would’ve scored that goal and foreseen the goalkeeper trying to come out,” recalls Heskey.

“We had a free-kick about five minutes before and Sami Hyypia headed it and [Paul] Gerrard made the save. I think he was coming out [second time around] so he didn’t have to make the save again.”

Heskey, who scored 22 goals in all competitions, was also on target in that game and it remains one of his most memorable goals.

“Scoring against Everton is always nice,” he smiles. “The reason I say that is because you don’t know the intensity and ferocity of the games until you play in them.

“I can’t explain it, but everyone seems to run that bit harder, kick the ball harder, elbow more – but they are great games to play in. They’re fun, actually.

“I scored in that game, it was a highlight [of my career].” 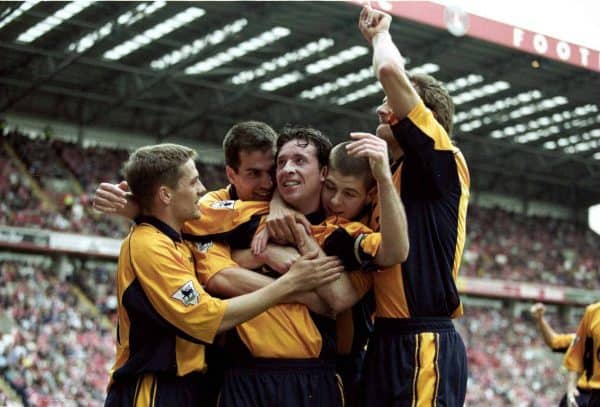 The Reds won nine of their final 10 games in all competitions to turn the season into one of the most memorable in the club’s modern history.

“It was only after winning the UEFA Cup that we could have a little bit of a celebration,” remembers Heskey, who was the only one of Liverpool’s four strikers – the others being Michael Owen, Robbie Fowler and Jari Litmanen – to start all three of the finals.

“The UEFA Cup final was our 62nd game of the season and I was running on empty. It was very tough. I can’t remember too much of the final – I had to watch it back to remember it, because it was just adrenaline taking me through that game.

“It was amazing. It was just one of those seasons you never wanted to end.”

If there was one word to describe Houllier’s class of 2001, it was solid: four centre-backs across the defence (Markus Babbel, Stephane Henchoz, Sami Hyypia and Jamie Carragher), with four centre-midfielders across the middle (Danny Murphy, Steven Gerrard, Didi Hamann and Gary McAllister).

Eight players started all three of the cup finals, and 10 players started both the FA Cup and UEFA Cup finals despite just four days between them. Consistency and understanding was at the core of this team.

“We were very, very strong and that’s what Gerard wanted,” says Heskey. “That’s what got us through a lot of the time.” 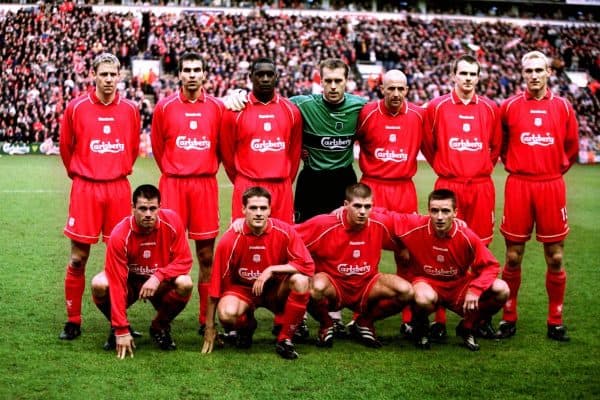 Liverpool went on to add the Charity Shield and the UEFA Super Cup three months later, to make it an incredible five trophies in six months. Heskey started all five finals.

“For the way that we played, I think Gerard thought it was integral to have me starting because we played a lot of counter-attacking football and you have to hold the ball up and stuff like that.

“We played so many games that there was enough to go round for everyone. Even if I had to sit out a couple of games, it wouldn’t really have bothered me because we had that team ethos. It was great to be in and amongst that team.

“When it came to the cup competitions, we were immense. We knew in Europe that bringing teams back to Anfield they were in trouble.”

A match report in the Guardian newspaper after the 4-0 win against Charlton on the final day noted that “by winning three cups and reaching the qualifying round for the Champions League, Houllier’s team have put Manchester United on notice that a fourth successive Premiership title is not Old Trafford’s for the taking.”

Liverpool had finished 11 points behind United, and a point behind Arsenal. The following season, Houllier’s side did indeed finish ahead of their north-west rivals, actually matching United’s title-winning points total.

But despite a then best Premier League points total of 80, Liverpool finished second to an impressive Arsenal side. It was, though, the first time the Reds had finished in the top two in the Premier League.

“The only thing I was a little bit disappointed with was that we didn’t have the consistency when it came to winning the league,” admits Heskey. “That would’ve been huge.”

Houllier went with the likes of McAllister and Murphy out wide, with Vladimir Smicer, Patrik Berger and Nick Barmby not getting the same opportunities.

“More attack-minded wingers possibly could’ve helped,” wonders Heskey when asked for what was needed to get to that next level. “But it worked well and we won trophies.” 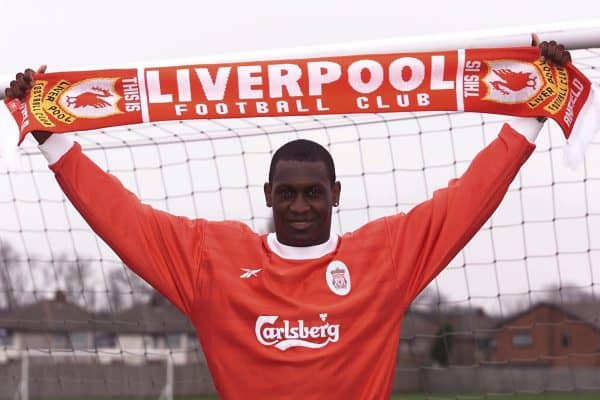 Heskey arrived at Liverpool in the spring of 2000 for a then club-record fee of £11 million, aged just 22.

“Coming to Liverpool was huge, it was massive. Everyone talks about the fee but it was irrelevant to me. I just got on with what I wanted to do and how you want to play.

“Having an £11 million price tag over your head is not easy, but I never thought about it. It’s now that you think about it.”

He arrived into a squad featuring Owen and Fowler, two of the country’s best goalscorers.

“It was great, everything was good. I turned up at Melwood and was sitting there with the likes of Fowler, Redknapp and Michael [Owen].

“I’d been around the national team with them but I hadn’t been in a club environment with them. It was just nice to be around them, and you are in awe at times.

“The training was great – it was different to what I was used to, in a sense that although we trained the way we played at Leicester, we didn’t go full out in a sense of tackling and things like that.

“I remember Stephane Henchoz as soon as I got the ball: bang. Took me out. I thought ‘OK, I understand what we’re doing now’.

“But that was good, because I believe you have to train the way you play, because that’s mentally getting you in-tune for when you go on the pitch.

“At Leicester, the manager didn’t really like tackling because we had a smaller squad, so you could get away with a lot more (in terms of doing less). But when I came to Liverpool it was all in.

“Robbie’s finishing was the best I’d seen, and I still to this day say it. To be in and around training with him on a regular basis was wonderful.” 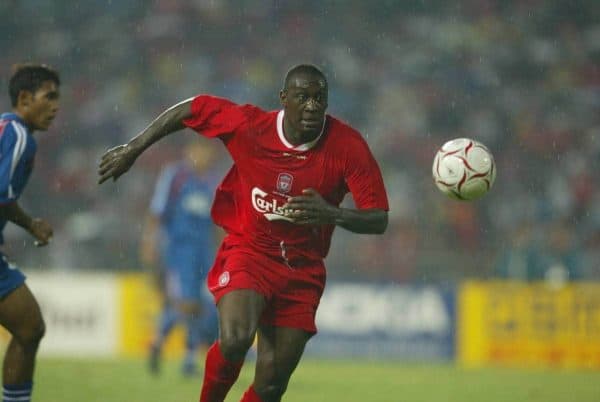 Heskey continued to be a regular starter for Liverpool for up until 2004 when he left the club in the same summer as Houllier.

Viewed by some as a ‘confidence player,’ Houllier had called for Heskey to be more clinical, but he often found himself played in an unfamiliar role.

“You’ve got to remember that I played left wing, right-wing, right-back, centre midfield, centre-back,” says Heskey. “It’s not bad for someone who was a centre forward, but played in different places when called upon, and did it consistently.

“I achieved everything that I wanted to achieve, so I don’t think I needed to change anything. When you look at what people say, it’s a perception of you.

“I see myself and I know what I’m capable of doing. People say I didn’t score many goals, but I scored over 100 in the Premier League.”

And it’s that perception that Heskey refers to when he released his book last year, titled ‘Even Heskey Scored‘ in reference to an England fans’ chant about his goal in the 5-1 win against Germany in 2001.

Such a chant is a disservice to a player who played in six League Cup finals, winning four of them, two World Cups and two European Championships.

When he signed for Liverpool, Heskey said “I want to be successful here and I believe we can be with the squad we have.” Those six months in 2001 did just that.