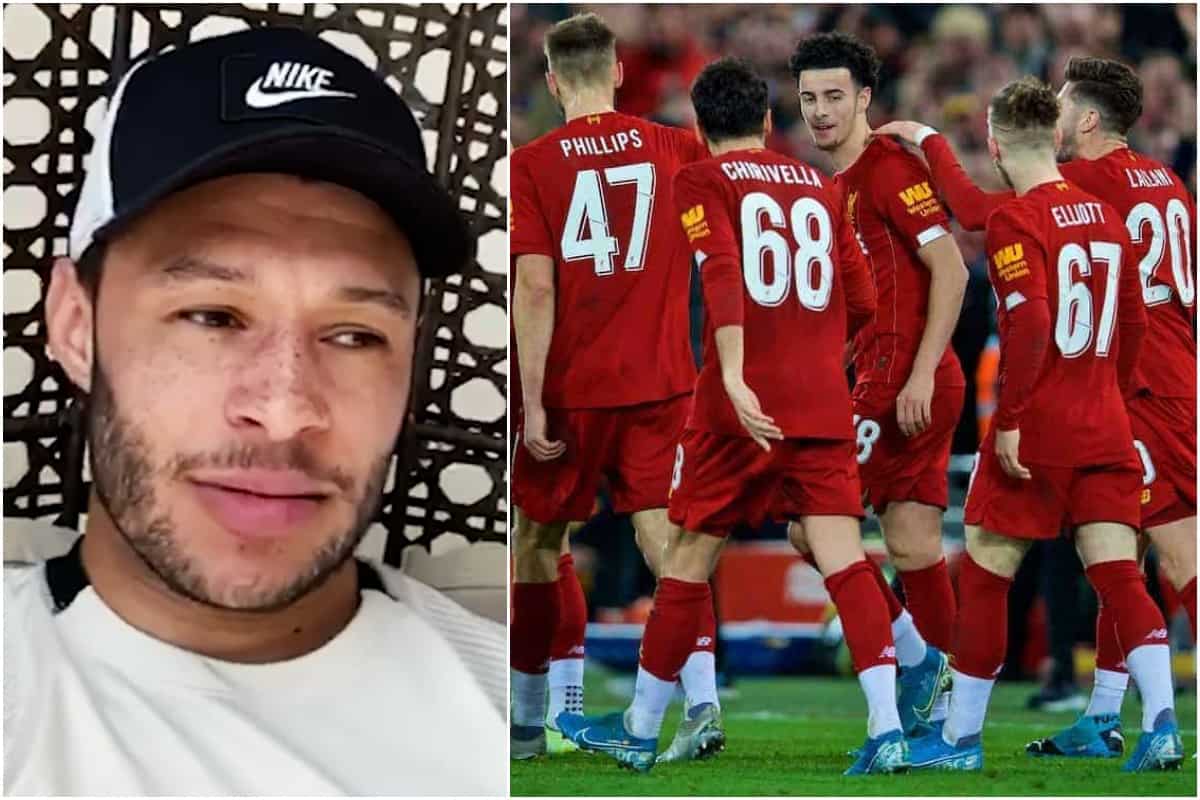 The tenacity, confidence and desire to play the Liverpool way from the Reds’ young stars has impressed Alex Oxlade-Chamberlain to such an extent that it sits in his top five moments of the 2019/20 season so far.

The 2019/20 season has proved to be a memorable one for Liverpool Football Club and its up and coming academy talent.

The combination of a hectic fixture list and the trust of Jurgen Klopp has seen 21 academy players handed their debut this season, primarily in cup competitions.

From the League Cup ties at MK Dons and Aston Villa to Everton and Shrewsbury in the FA Cup, the opportunities to impress were seized as the young Reds stood up to the test.

But for Oxlade-Chamberlain, it was their efforts in the FA Cup which he has identified as one of his top five moments of the 2019/20 campaign so far.

Liverpool’s No. 15 played the final 20 minutes of the Reds’ 1-0 win over Everton in January, coming onto the field of play within moments of Curtis Jones‘ stunning winner, a goal which paved the way for the Reds’ youngest-ever assembled side to overcome Shrewsbury at Anfield – where no senior players were present in the matchday squad.

And the way Liverpool’s youngsters played like the senior side and were not afraid to show off their “individual qualities” has left a lasting impression on the 26-year-old.

“This is more of a team one because, to be honest, I did absolutely nothing to contribute too much. The performance of the kids, the young boys in the cup against Everton at Anfield,” Ox told LiverpoolFC.com of one of his favourite moments.

“There was a few of us, senior boys, in the squad that day and we obviously tried to make sure that we set the example of how to go into a big game like that against our rivals in the derby at Anfield.

“But we never really realised that they could put in such a monstrous performance, we knew they were all brilliant players but there’s more to it when you’re in front of a full bouncing crowd at Anfield in the cup with the pressure of that.

“I came on with about 20-25 minutes to go and was up close and personal to Curtis’ goal and that was just a brilliant way to cap off an amazing performance against a full-strength Everton side.

“And then I’d go on to say as well what they then went on to achieve at Anfield against Shrewsbury was brilliant as well.

“There was literally not one first-team player there and they were absolutely magnificent, every single one of them.

“That was a proud moment to see that, to see the young boys taking on board what we had been doing as a team and playing the way that we play and bringing their own individual qualities to it – that was really impressive.”

With the manager always prepared to give young talent and the pandemic causing hesitation and state of uncertainty in the transfer window, the likes of Jones, Harvey Elliott and Neco Williams could see their game time increase next season as a result.

They, along with a plethora of academy players, have shown they have the mettle and the acknowledgement from Ox and other first-team players will only boost their confidence if and when they are called upon.