Police have proposed that Liverpool should play their home games at neutral grounds when the Premier League returns next month, to avoid crowds gathering outside Anfield.

The suggestion has been met with annoyance and dismay in several quarters, with fans questioning why they are being particularly singled out once more.

A report in the Times late on Thursday suggested that the Reds had been asked to play at neutral venues in “any Liverpool home game in which they could win the title and [for] matches away to Everton and Manchester City.”

That has now been further clarified by the Mail‘s Ian Herbert, who reports that six specific Premier League fixtures have been identified as high-risk by the police and will need to be played at neutral venues. 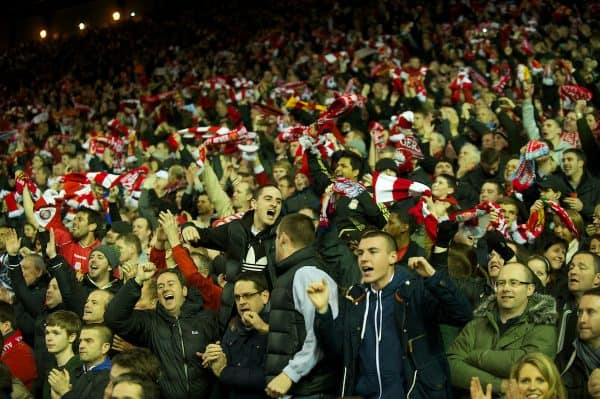 Further discussions around other matches are still being had, as well as discussions with police forces around different areas of the country who must state if they are willing to host and patrol the games played in neutral venues.

Journalists and fans made reference to football fans being unfairly singled out once more, given some members of the public who have been congregating elsewhere.

It was also noted that fans have not been standing outside stadiums in Germany, where football has already restarted.

another quite sad and fairly ugly reminder that many people – the government, the police, the people who run football – seem to have decided that football fans cannot be trusted. https://t.co/HhxEYPPQxB

In a normal world, the only reason fans would congregate outside a stadium would be to still be part of the matchday atmosphere before and during the game.

There will be no such atmosphere without fans there, nobody is going to stand outside a silent stadium. https://t.co/RncPwqtwgU

Only northern based teams, strange.

It’s a demonising of football fans. The public and Police, for example, congregating on Westminster Bridge, seems to be allowed.

Yep those scenes outside Dortmund v Bayern the other night were truly terrifying. ;-)

"Liverpool's home games where they could win the title may be played at neutral venues in case people gather in a crowd outside the ground" pic.twitter.com/AH3VT2kCCj

After so many discussions and complaints from other teams about maintaining the integrity of the competition, unfair advantages and every other problem they have had, it seems laughable that now they would be largely fine with Liverpool being one of a handful of sides having to play in neutral venues while others return to normal.

David Lynch of the Evening Standard suggested the Reds would reject the suggestion that they have to play key games away from Anfield.

#LFC and others will push back on this and rightly so. The suggestion here is that fans of northern teams can't be trusted. And if that were the case (it's definitely not), name me an English city that doesn't have Liverpool supporters in it? https://t.co/tYQcGQdvtS

Outside the ongoing discussion of Premier League matches, dates have now been set for the remaining FA Cup ties.

The ties will provisionally be played over 27-28 June for the quarter-finals, 11-12 July for the semis and Saturday 1 August for the final.

Liverpool won’t be involved, after losing at Chelsea in March, but they could be dates when the Reds don’t have a league match of their own, depending on the cup draw and how the restart progresses.