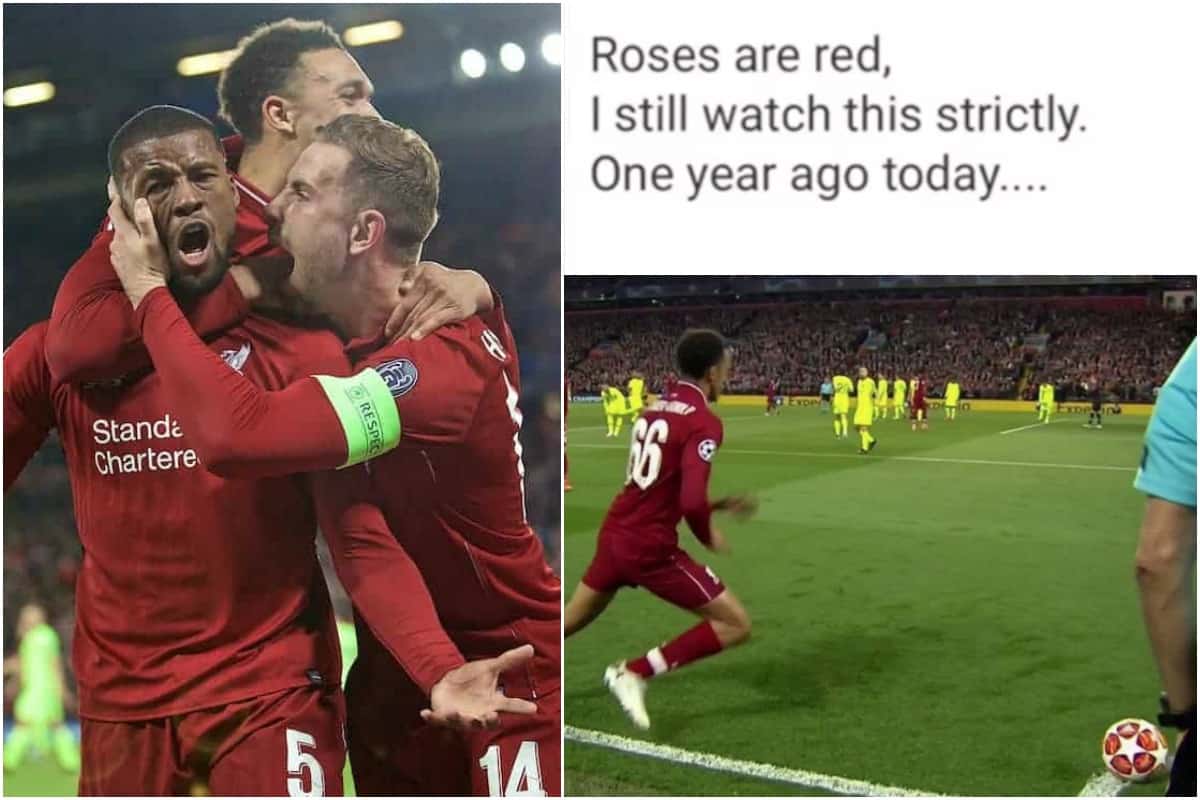 One year on from that memorable and historic night at Anfield, those involved were quick relive the game of a lifetime.

It was May 7, 2019, and Jurgen Klopp’s side had their backs against the wall as they welcomed Barcelona to Anfield.

Many had tipped the Reds to simply put up a fight but still come up short, Liverpool, however, broke the wall down and conjured up a 90-minute performance which will forever be enshrined in club folklore.

From needing to overturn a three-nil deficit and having effectively missed out on the Premier League title to Roberto Firmino and Mohamed Salah both being absent, fate appeared to have conspired against Liverpool.

And that’s not even mentioning both Jordan Henderson and Andy Robertson picking up injuries during the game.

But then again, when do Liverpool ever do it the easy way?

And as it was an emotional and monumental evening, players and members of the coaching staff have been reflecting on the night through their eyes.

Aside from Trent Alexander-Arnold and Divock Origi‘s combined moment of genius, the omission of Gini Wijnaldum from the starting lineup and his subsequent game-changing substitution at half-time was one of the biggest talking points throughout all stages of the match.

An injury to Robertson saw Klopp turn to the midfielder, who by his own admission, had never “been as mad in my career” after being left out – he would turn that anger to fuel his display where two goals in 122 glorious seconds followed:

“I don’t think I have ever been as mad in my career. I was so angry, so, so angry! I ran straight inside, never spoke to anyone, never saw anyone. I got showered, went straight to the hotel.

“I’m not even sure I listened to Klopp at half-time when I was coming on. Honestly! I was so angry, so wrapped up in my feelings. You know, I think it was actually the best thing to help me. I really think the anger helped.

“Goosebumps. The best header of my life. When I woke up the next morning, I said to myself: ‘Please don’t let that be a dream’. We did something unbelievable.”

The anger was visible for assistant manager Peter Krawietz, who also admitted, like many, that he did not witness the moment the Reds made it 4-0 and only had the roar of the Anfield crowd to alert him:

“We brought angry Gini on! You could see in his face, if you know him you thought, ‘Oof, he’s on fire! Gini is on fire!’ and like we saw, he was on fire!

“I believe we wanted to make a change and I was talking to Joe Gomez, and suddenly the whole stadium exploded!

“I thought, ‘Oops, what happened? Everybody is celebrating so the ball obviously hit the net!’ It must have been a good one but, to be honest, I didn’t see it!”

For Pep Lijnders, he was eager to celebrate the entire club for pulling together to make history, from the ball-boys – who helped Trent – to the backroom staff and the players themselves.

But notably, he was right in saying it was “only us” who could have made it happen:

“I know how strange it sounds now but I was convinced we would do it, as long if we played our way. If we could stop their counters and attack them with all we have.

“There was no Plan B, it was just our plan with imagination. The passion and ambition of our players is from another planet.

“It’s all about details, creating small advantages. We made videos for our ball-boys and we instructed them on game day.

“What’s important for us is the individual commitment with our ideas and our identity. Everyone is committed with that: the players, the kit manager, the physio, the team manager and the ball-boys.’

“I was screaming for 10 minutes after the game: “Only us! Only us!”

And to mark the day, some Reds took to Instagram to share their memories and revel in what was a game which everyone associated with the club will always remember.

As will the words, “corner taken quickly…Origi!” – and both Robbo and the club enjoyed using it for the latest social media trend:

Trent, meanwhile, was keen to let the picture speak for itself – can you blame him?:

Finally, for Milner and Gini the day offered the chance for a deeper reflection, with the “incredible noise, the emotion, the amazing togetherness and the level of performance from everyone” ensuring it was “the greatest game I’ve ever been involved in” for the former:

12 months on and still buzzing from the memories… the incredible noise, the emotion, the amazing togetherness and the level of performance from everyone; players, staff & fans. The quality of the opposition, added to the disappointments we’d suffered before, made this night so special – the greatest game I’ve ever been involved in ?? #YNWA #cornertakenquickly

One year ago today!! ?? What a special night in so many ways, the focus of the team, the atmosphere at Anfield… everything came together so well ?? An amazing night for all Reds ???? #YNWA #LFC

There are few things in life which present you with the emotions Liverpool served against Barcelona and it served as the perfect embodiment of how unique and special this football club really is.

Here’s to many more amazing triumphs!