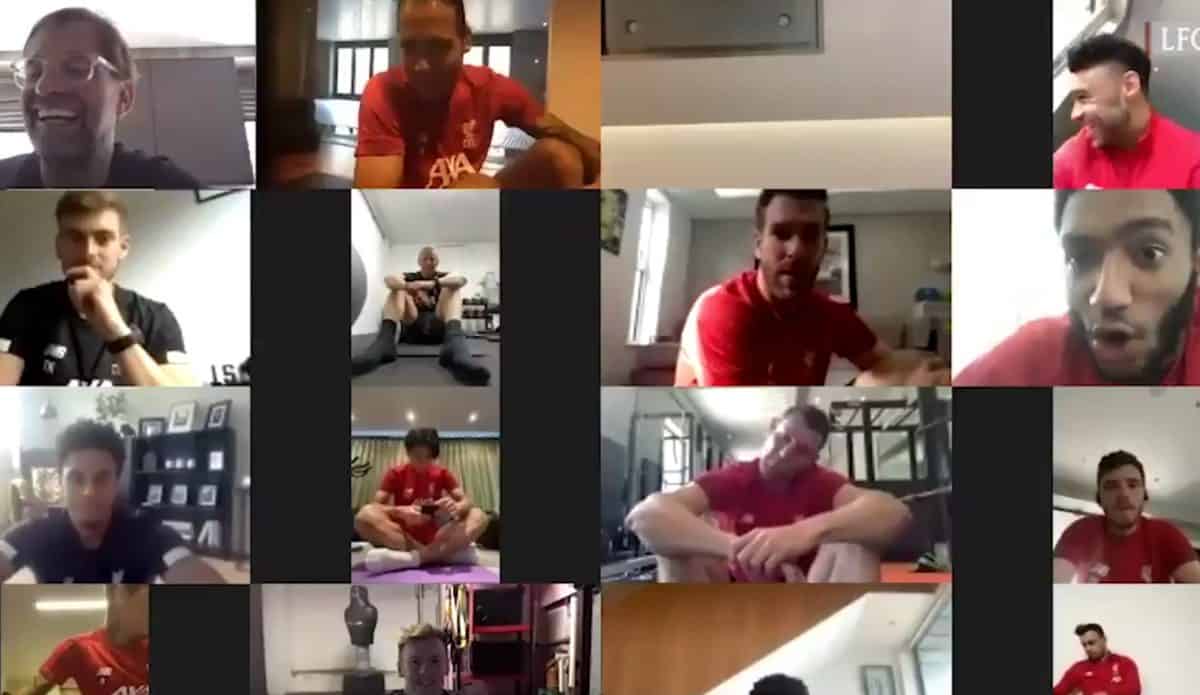 Liverpool’s squad have continued the online group yoga sessions—and the latest gathering saw a pair of stars take the brunt of the jokes over the state of their lockdown appearance.

As is customary during this extended period of staying at home in the UK, jokes between friends and family were in abundance as Jurgen Klopp welcomed his team over Zoom.

With no regular training sessions allowed yet, the squad have been far more visible than usual, ironically, as we can no longer watch them in matches.

But as many of us regular folk might be finding, the longer the coronavirus-induced lockdown goes on, the more it plays havoc with our sense of acceptable hairstyles—and this time around it was the turn of Andy Robertson and Alex Oxlade-Chamberlain to feel the collective disdain of their team-mates.

Klopp, as usual, was first in, welcoming the likes of Virgil van Dijk, Pedro Chirivella and Dejan Lovren.

And it was the Croatian who Klopp posed the first question to: with all the sunshine the country enjoyed recently, how has the defender not managed any kind of tan?

“Robbo, I know you miss me but look after yourself a bit mate!” ?@VirgilvDijk's advice to @andrewrobertso5, a new trim for @Alex_OxChambo and more ahead of our latest online yoga session ? #StayAtHome pic.twitter.com/bWZeD2azIc

“Where have you been when the sun was out the last four weeks?!” Klopp asked—but Xherdan Shaqiri‘s appearance saved the need for an explanation.

Before long a loud and clearly wide awake Andy Robertson was on the line screaming at our big Dutch centre-back—but Virgil had a few choice words of his own for the Scotland captain, who has been clearly been affected by the lack of a trip to a hairdresser.

“I know you miss me but look after yourself a little bit, you look a mess! [Put] a little product in your hair!

“Did you just jump out of bed, open the laptop and then ‘good morning’?!”

Fortunately for Robertson, there was another bad hair update to follow shortly, after Ox appeared to have taken matters into his own hands and attempted a home-made haircut.

“It didn’t go well, I tell you that!” bemoaned the midfielder, showing off a rather uneven trim from all angles.

The squad largely delighted in the No. 15’s misfortunes, Robertson exclaiming it looked “fresh!”, but support came from Joe Gomez who said one side, at least, “didn’t look bad.”

Ox made the point that Joel Matip needed to “try something soon” too—but the big defender didn’t immediately appear on screen, so perhaps that development is what we’ll see next time!

As Jurgen said in closing, the squad gave the appearance that we’ve been “12 or 15 weeks in lockdown,” so if you catch a glimpse of yourself in the mirror this weekend and think you’re looking a little dishevelled…rest assured, you’re not alone!