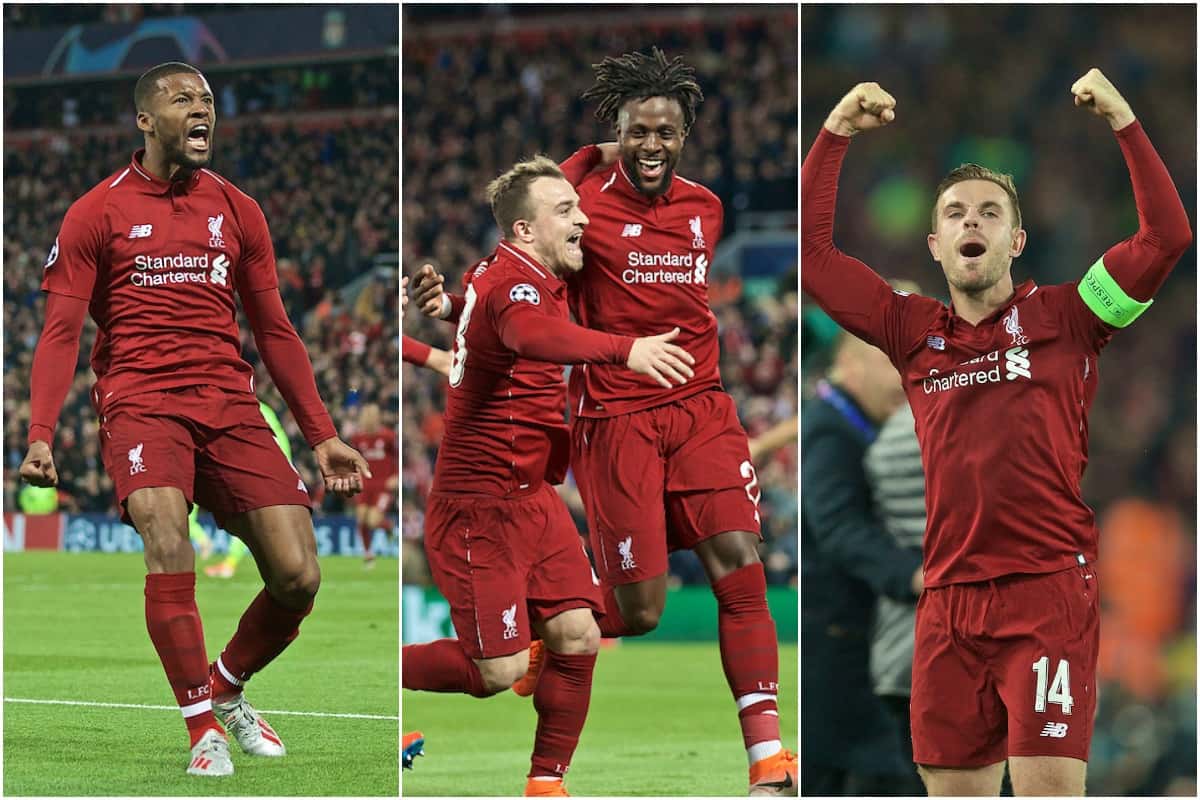 One year ago we witnessed what is arguably Anfield’s greatest ever night – certainly the Reds’ greatest ever second-leg European comeback.

While we all remember the goals, the emotions, the celebrations after full-time – and, of course, that we went on to win Number Six in Madrid, there’s so much about that night on May 7, 2019 that made it possibly even better than you recall.

Without even mentioning the fact we were 3-0 down from the first-leg, a scoreline that was far from a fair reflection of how well Liverpool actually played in the Camp Nou, there’s plenty more that made this scoreline against the odds.

“If we can do it: wonderful. If we can’t do it, let’s fail in the most beautiful way.”

Liverpool did not fail, and they did it in the most beautiful way.

No Salah or Firmino… but more to it than that

Had we won this with all our front three fit and on form, blitzing the opposition like in European games vs. Roma and Man City the season before, it would still be incredible.

But there was no Mohamed Salah or Roberto Firmino, both injured.

In fact, the day before the game Liverpool had trained with just 14 outfield players, with Virgil van Dijk, Adam Lallana and Alex Oxlade-Chamberlain all working separately from their group as they carried injury issues.

Naby Keita was also ruled out and there were genuine claims that Rhian Brewster would be handed his first professional appearance in senior football.

Brewster didn’t start but was among the subs alongside fellow teenager Ben Woodburn.

Klopp instead went with Divock Origi up front, with Sadio Mane on the left and Xherdan Shaqiri on the right… 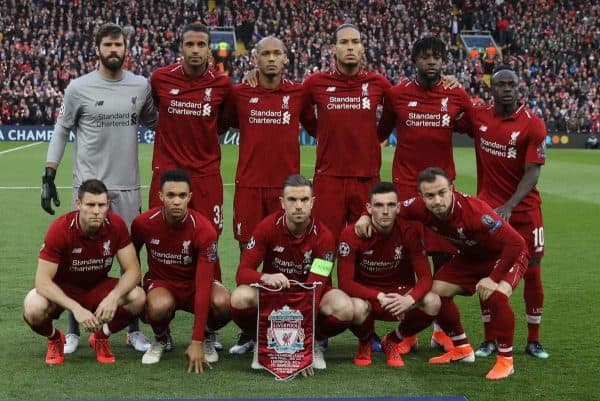 That Shaqiri played 90 minutes was a miracle in itself (he was subbed at 90 minutes for Daniel Sturridge).

The Swiss hadn’t started a match in four months before this. And only made six sub appearances during that time.

Just as rare was Shaqiri lining up in a 4-3-3 formation, with Klopp having until then only used him when adopting a 4-2-3-1 lineup.

The decision paid off, with Shaq assisting Wijnaldum’s second with an inch-perfect cross from the left. 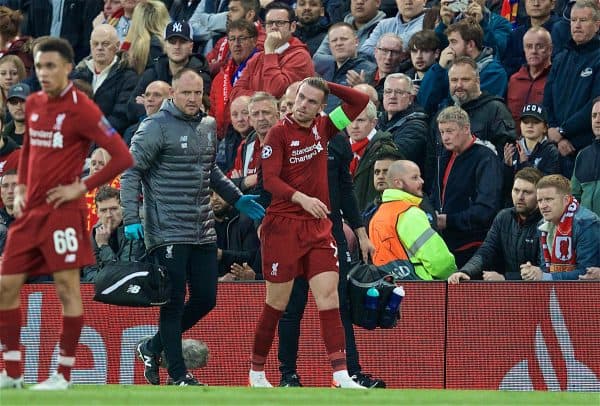 After half an hour, Jordan Henderson took a hefty blow to the knee and looked set to be subbed off.

Gini Wijnaldum was stripped and ready to come on, but Henderson went back on.

At half-time, Liverpool’s captain wasn’t in the changing room with his teammates. Instead, he was in a warm-up room across the hallway on an indoor bicycle in order to keep his knee from sizing up.

“The doctor said just keep it moving,” explained Henderson post-match. “I managed to get to half time and I had a bit of treatment, took painkillers, all that stuff. There was a jab and tablets. Both. Everything.

Then Henderson went out and gave everything on the pitch. 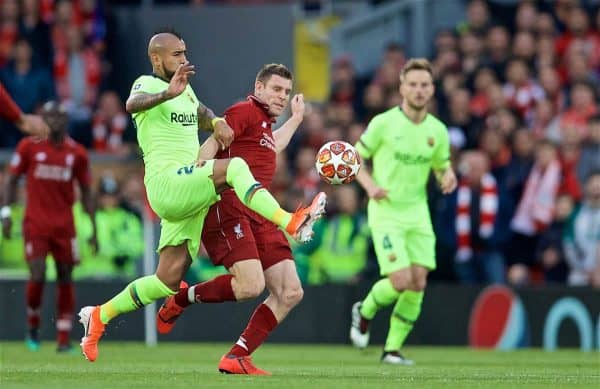 Ten minutes after Henderson’s injury, it was Andy Robertson who was down after a clash with Luis Suarez.

The Scot made it to half-time, but then came that Wijnaldum sub.

We now had James Milner at left-back, no Salah, no Firmino, Henderson carrying an injury. 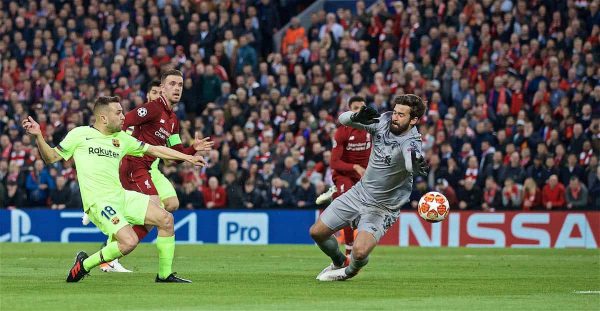 Everybody knew that a goal for Barca would’ve meant Liverpool needing five… with the Catalan’s Tweet from the first-leg reminding us of that!

And so it was Alisson who made five big saves on the night: four of them with the score at 1-0.

First from Messi, then a weak Phil Coutinho attempt, then from Jordi Alba on the stroke of half-time.

Suarez then was foiled just before Wijnaldum’s first goal, then Messi was denied at the near post at 3-0.

Big saves from the Brazilian.

Robbo really got under Messi’s skin

Andy Robbo really got carried away in the emotion of the night and really got under the skin of Messi.

Though, the moment when he pushed the Argentinian in the back of the head he later admitted he regrets:

“I do look back on that moment with Messi as one regret. I don’t like seeing it. When I saw it afterwards I was gutted.”

Robbo had a running battle with Suarez in the first-leg and the first half of the second leg before the pair clashed, forcing the Scot off injured.

But his response at full time was the best part: “Who is the going to the final? That’s all that matters.”

A 21-year-old Trent was clearly moved by the emotion of the night, but his response after all the full-time celebrations had calmed showed his humility.

After all the other players had left the pitch, he took a lap around to thank the fans and to drink in that atmosphere.

It was a special moment, and even the Barca fans applauded him back.

It was here that Klopp really got carried away with the mentality of his squad.

“I’ve watched so many football games in my life and I cannot remember a lot like this, playing against maybe the best team in the world,” he told BT Sport post-match.

“Winning is already difficult, but winning with a clean sheet… I don’t know how the boys did it.

There were tears in the stands as emotional Reds witnessed a game for the ages, one they’ll tell the grandkids about and will live forever in Liverpool’s folklore.

Fans on the Kop broke out into song as George Sephton played John Lennon’s Imagine, while Barcelona fans applauded from the opposite end of the ground.

There were also tears from the players.

“I saw James Milner crying after the game on the pitch, it means so much to all of us,” explained Klopp. “You could see the faces in the stadium.”

“We were celebrating, some of the guys were crying,” told Shaqiri.

And finally, those full time scenes

Watch it. Watch it for the emotion, the togetherness, the pride, the humility, the uniqueness of this football club.