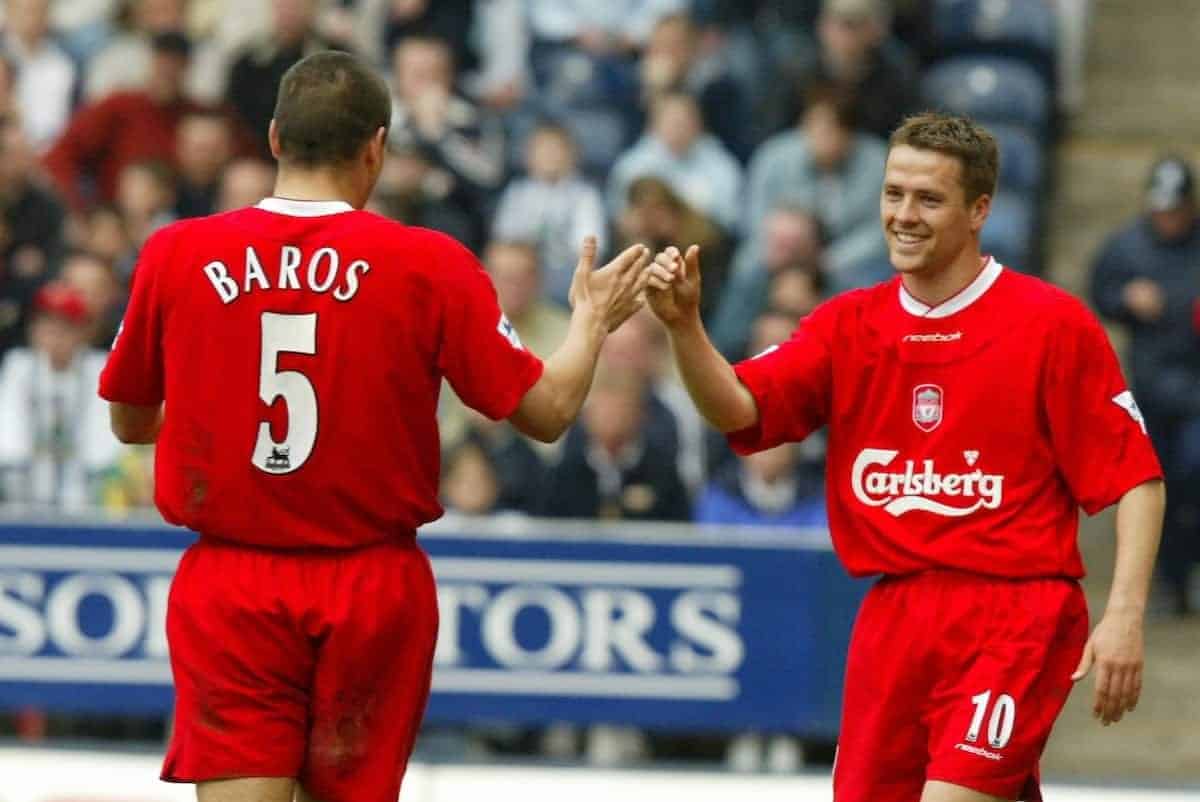 Gerard Houllier’s penultimate season in charge of Liverpool was something of a disappointment, as the Reds dropped from second the season before to outside the Champions League spots.

The Reds had finished runners-up in the Premier League in 2002, so optimism was high that the final step could be taken as we watched the World Cup unfold and the new campaign draw close.

Some big-money signings shone in the summer, Houllier had done all his transfer business either with French players or those based in France—a market he knew best—and supporters felt that 02/03 could, finally, be our year.

The one surprise was Nicolas Anelka not making his loan move a permanent one, but Michael Owen was fit and firing so there was much to look forward to.

It didn’t quite work out that way.

The Reds were inconsistent, frustratingly blunted at times in attack and surprisingly porous at the back, meaning the season quickly became all about a top-four finish yet again.

That particular battle went to the final day and a straight shoot-out with Chelsea at Stamford Bridge…which Liverpool lost, 2-1, consigning them to a campaign in the UEFA Cup instead.

As we finished fifth, the Reds hit only 61 goals in the Premier League—their lowest tally in three years—with only 10 different goalscorers in the competition.

Peak Michael Owen, though we didn’t know it yet 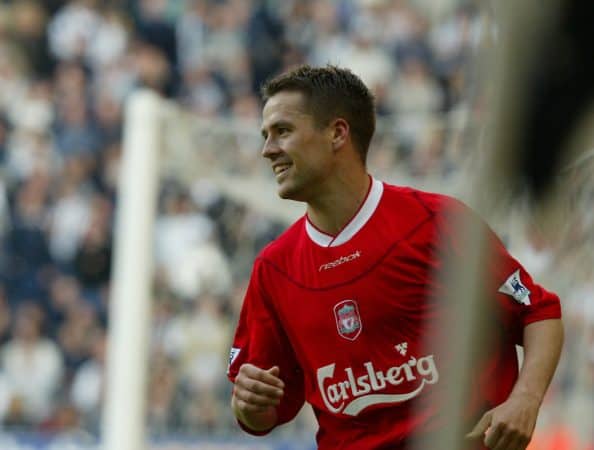 Having hit a career-best 19 league goals and 28 in all competitions the previous season, the challenge for Michael Owen was to prove his consistency at that level.

Owen’s finishing was lethal, his pace still electric and the hamstrings largely held up—he made a career-best 54 appearances in total during 02/03.

Though we, and he, didn’t know it at the time, this was to be as good as it got for the No. 10—injury issues would worsen, his transfers would be questionable and certainly his reputation around Anfield would sour.

Never again did Owen reach 20 goals in a season across all competitions, for any club, and in fact he only managed double figures in league goals on three further occasions.

During 02/03 his finest moment came as he notched his 100th goal for Liverpool in the league as part of a four-goal haul against West Brom.

He was only 23 years old at the end of this campaign, but this was Owen at his best and it was rather downhill thereafter.

Terrible transfers and problems of productivity 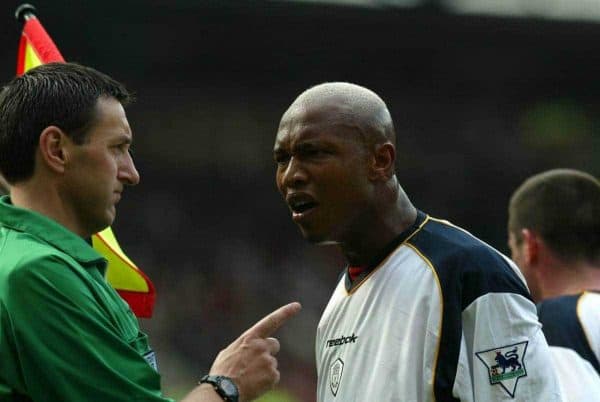 Alou Diarra was only ever a backup and youth prospect; Patrice Luzi a third-choice goalkeeper. They can be overlooked.

But in opting not to sign Anelka, Houllier and the club instead made three first-team additions over the summer—and each one proved an expensive, farcical error.

Salif Diao had the energy and desire, but lacked any significant quality in the middle of the park. Bruno Cheyrou was a complete disaster, failing to offer creativity, goal threat or any pace to the attack, netting just once in all competitions as a so-called attacking midfielder.

The Senegalese forward had impressed at the World Cup, but he was largely wasteful, greedy, weak and lacking the class to be a regular Liverpool forward—and that’s without even beginning to discuss his character, which was distasteful to say the least.

Not one of Houllier’s signings worked out, in a summer when we needed the so-called final piece of the jigsaw. Instead, they took the club backwards.

Baros and Murphy offer hope for the future 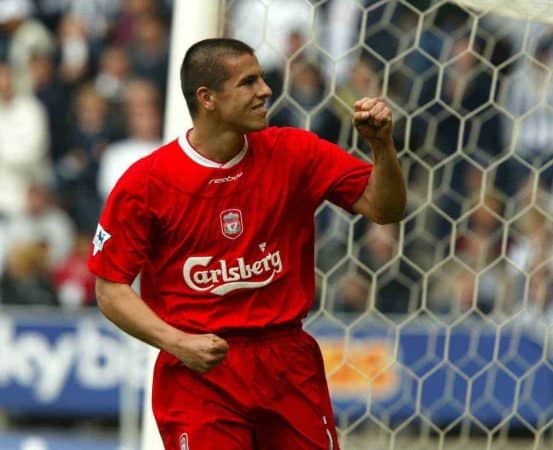 While Emile Heskey toiled away, often on the wing, and Diouf did his impressive impersonation of a third-tier forward in front of goal, solace came in the form of a shaven-headed, 20-year-old striker from the Czech Republic.

Milan Baros ended the season as joint-second top scorer, hitting 12 goals from 42 appearances—but it was much more impressive than those numbers suggest, given he was often either a sub or taken off.

The No. 5 averaged a goal every 179 minutes that season as he staked his claim to be a go-to key attacker for the team.

Danny Murphy also brought good consistency in front of goal, also hitting 12 in all competitions, with that tally boosted by a handful of penalties.

Top-corner strikes against Everton, Spurs and Leeds proved his quality, while he was also a key creative conduit in the team all season.

11 games without a win 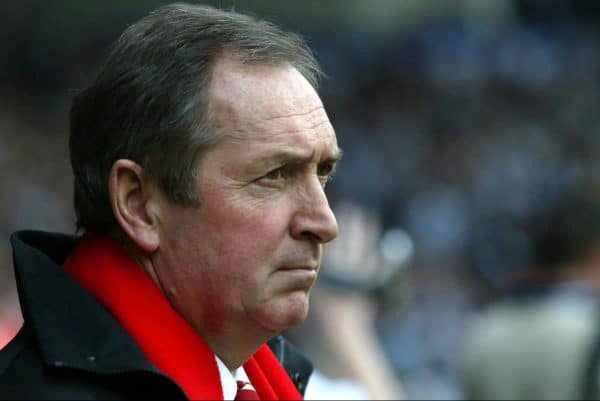 It’s notable watching the video above that during the November and December games, there aren’t too many wild celebrations when goals go in.

There’s a good reason for that: Liverpool didn’t pick up a single league victory in that time.

It seems incredible to believe now, given the unstoppable and win-addicted team Jurgen Klopp has put together, but that Liverpool side simply couldn’t buy a victory: from 9 November 2002 to 11 January 2003, it was 11 games, five draws, six defeats.

Add in the Champions League exit after a 3-3 draw in Basel during that same period and it was a dismal time indeed.

Houllier was firmly back in the dugout after his health problems in 01/02, but there appeared an element of energy or drive missing from the boss and, in truth, this season perhaps showed that he had hit his own peak at Liverpool. 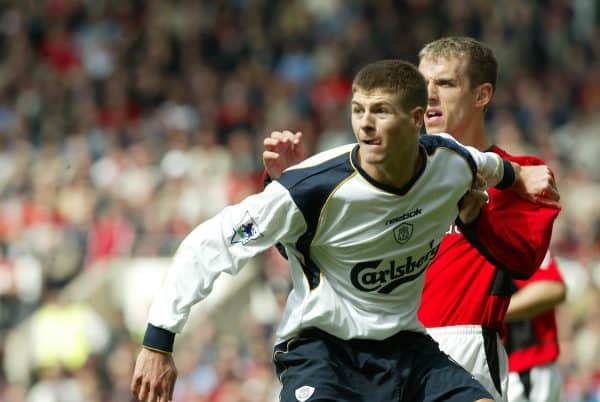 The legendary No. 8 was still an up-and-coming No. 17 during this season, with Gerrard on a learning curve which included some tough love from Houllier.

Nobody doubted Gerrard’s quality, but he was finding consistency hard to come by as a 22-year-old at times, meaning a mixed campaign of highs and lows.

There were sublime solo goals against Tottenham and Charlton, but also games where he was left out entirely or, as against Basel in the match above, hooked at half-time.

Nobody can doubt the mental strength of him either, though: less than a year after that hurtful night in Switzerland, he had been appointed club captain. 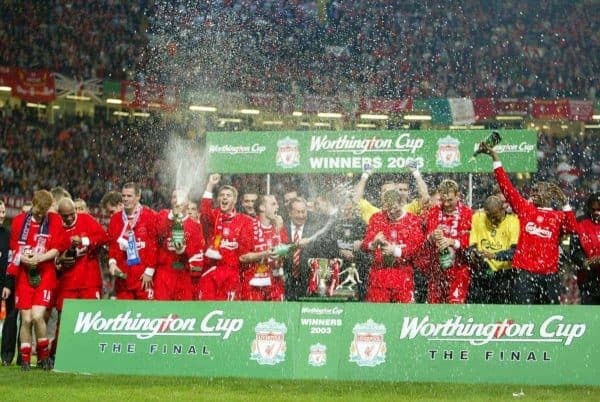 The season was very much one of disappointment overall, and perhaps an element of showing that more rebuilding needed to be done.

A handful of familiar and good, or even excellent, players barely had any involvement: Patrik Berger spent the season injured, Jari Litmanen was sold in August, Markus Babbel was back from illness but certainly not the same player and hardly played.

Those coming through were not quite of the required level, either: Chris Kirkland couldn’t establish himself, Neil Mellor made a handful of appearances, Gregory Vignal played once.

The push toward the title didn’t play out the way Houllier wanted, and all in all—despite reaching and winning the League Cup final in Cardiff—it was a largely forgettable, regressive campaign. 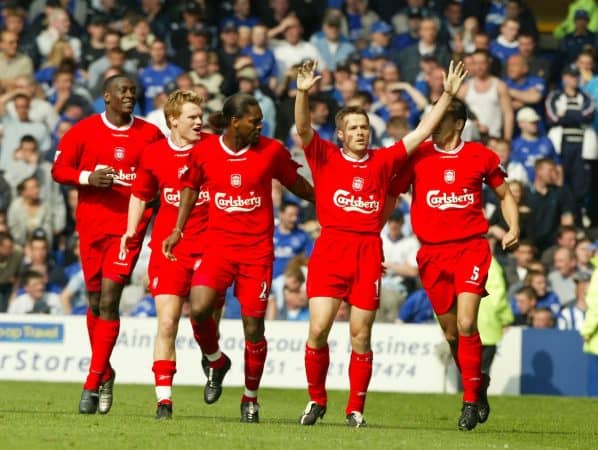