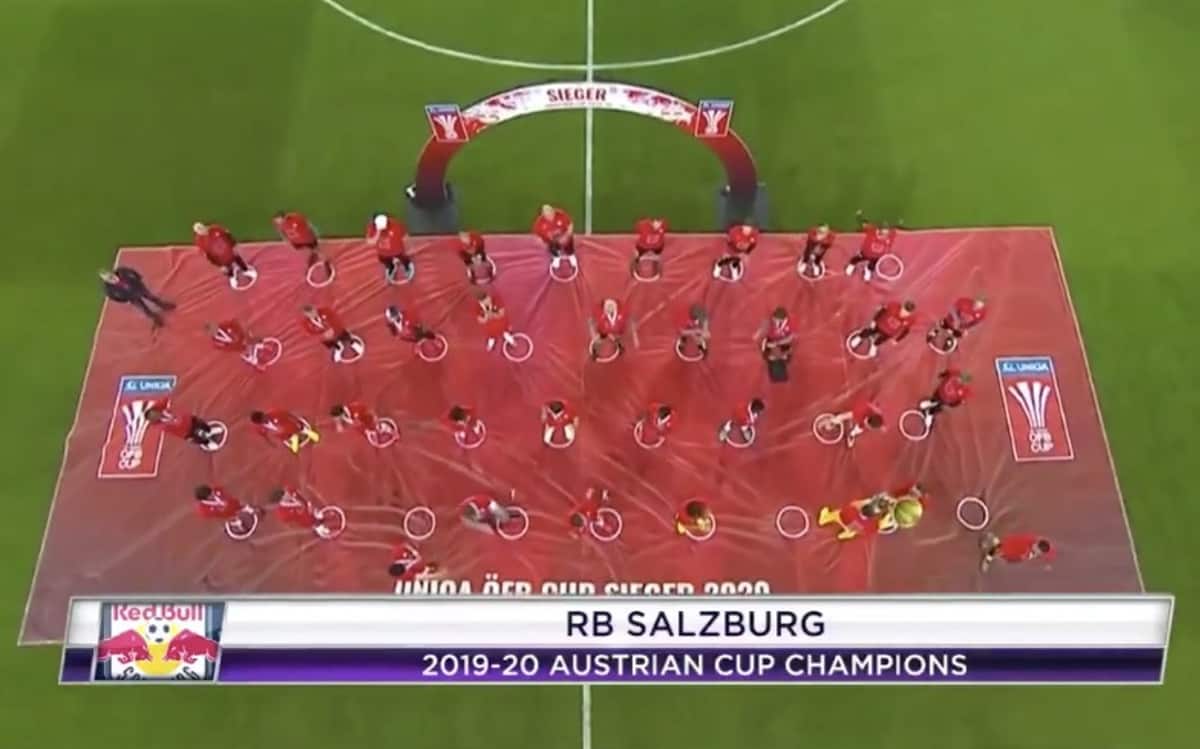 Red Bull Salzburg won the Austrian Cup on Friday night, and their socially distanced trophy lift caught the eye as a possible precursor for Liverpool in the Premier League.

Jesse Marsch’s side sealed a 5-0 win over SC Austria Lustenau ahead of the return of the Austrian Bundesliga this weekend, with Reds-linked Dominik Szoboszlai among the scorers.

It was a routine win for Salzburg, in front of an empty stadium, but what caught the eye was how the trophy presentation was orchestrated.

An area was mapped out with a sheet on the pitch, with circles outlined for each player to ensure safe distance from each other—which made for a surreal sight, but one that could hint at how Liverpool’s own trophy lift could look.

??? Jesse Marsch has his first silverware in Austria, as RB Salzburg take a 5-0 win over SC Austria Lustenau in the Austrian Cup final! pic.twitter.com/lb9yIEXAtP

Of course the notion of players practicing social distancing to such a degree after a 90-minute full-contact final is a little jarring, but they are advised to avoid all unnecessary risk when out of a game situation.

Liverpool need just six points to clinch the Premier League title upon its resumption next month, but plans will be in place for a presentation as early as the first game back.

Man City host Arsenal in the first fixture of the top-flight restart, due to their game in hand, and if they lose, a victory for the Reds in the Merseyside derby would be enough to clinch the title.

Therefore the trophy may be needed at Goodison Park that day—or at a neutral venue yet to be confirmed, as talks with the police continue over safety.

Whether Liverpool follow the example set in Austria remains to be seen, but it is an interesting insight into how a trophy lift could be organised in the current situation.

Speaking to beIN SPORTS regarding the prospect of the Reds winning the title, Klopp said the Reds would “use each inch” of close contact permitted if they seal it in the coming months.

“We just want to be together in that moment,” the manager explained.

“We will see how much close contact is allowed by then, and we will use each inch of that for sure. But only if it’s allowed.”