Curtis Jones emphatically announced himself as the next academy graduate capable of successfully transitioning into the first-team, and the current climate could present him with the chance to entrench himself in Jurgen Klopp’s squad, writes Ben Bocsak.

It was no ordinary game. When the floodlights illuminate Anfield, it never is. But as John Moss blew his whistle for the final time and the Kop rose in jubilation, there was a slight tinge of mockery and taunting in the fans’ inebriated cheers rather than the unbridled elation which is often affixed to games of similar magnitude.

January 5, 2020, will always be remembered as the day a bunch of ‘kids’ from Liverpool’s academy defeated Everton’s first-team. It will be the ultimate taunt.

However, the date could be remembered for another hallmark too. If all goes to plan, it will be recalled as the night Curtis Jones announced his name to the Anfield faithful.

Amid the celebrations after the final whistle, Jones’ smile was the widest. As the cameras zoomed in on Liverpool’s No. 48, his grin was permanently fixed to his face whilst being tightly embraced by Jurgen Klopp. The young midfielder had every right to be brimming with delight.

His winning goal was the type he would have dreamed of on his way to Kirkby as a kid and during his visits to Anfield as a fan.

Jones’ winning goal will not have surprised many who have followed his career at academy level. In fact, he’s probably scored better ones in youth derby games. But it perfectly encapsulated what the midfielder from Toxteth is about.

The clever drift into space, the flamboyant flick to Origi and then the impeccable finish nestling into the top corner.

Curtis Jones’ game is about flair and confidence. The 19-year-old can burst forward from midfield and slalom past defenders with ease. He has the exuberant energy and fighting spirit to press aggressively as well as the wit to exploit key areas of the pitch. He has the finish too – his venomous right foot is lethal even from 20 or 30 yards out.

Undoubtedly, like any midfielder coming through the ranks at Anfield, Jones will be labelled with the ‘next Steven Gerrard’ tag. However, whilst he shares some similarities with Liverpool’s former captain, the best compliment he can be given is that he has already established his own style distinct to that of Gerrard.

Jones is in a unique position in the sense that he is comfortable playing in various roles. In the first team, he has already played as part of the midfield three and on the flanks, meanwhile, in the academy, Jones has also featured as a false nine.

And while his academy season might have been curtailed by the current crisis, if the football resumes as expected, Jones could have a huge opportunity to stake a claim for a first-team spot.

The 19-year-old was already on the periphery of first-team action with Klopp often including him in the squad for Premier League fixtures prior to the suspension of the football, but with the heavy deluge of games expected to bombard the Reds, his place in the squad could now also translate to minutes on the pitch.

With Liverpool potentially playing twice a week just like during the Christmas period, Klopp will inevitably have to rest his big guns.

The German will be more inclined to do so considering Liverpool will likely have little to play for in many of their remaining fixtures.

In addition, FIFA has also granted the use of five substitutes in light of the current crisis which will open up even more avenues into the first team if the Premier League decides to adopt the new temporary measure.

The heavy fixture schedule and the extra use of subs will present Curtis Jones with the chance he has been yearning for.

And he is well placed to take his chance. He has the hunger to succeed at Liverpool and he has been guided by influential figures from the very beginning. Gerrard himself helped to hone the youngster’s skill at U18 level, meanwhile, James Milner has often offered him advice in training.

He was just 16 years of age when he scored 16 goals and provided six assists in 30 games for the U18s under Steven Gerrard during the 2017/18 campaign – and the former Liverpool captain tipped Jones for stardom even back then. 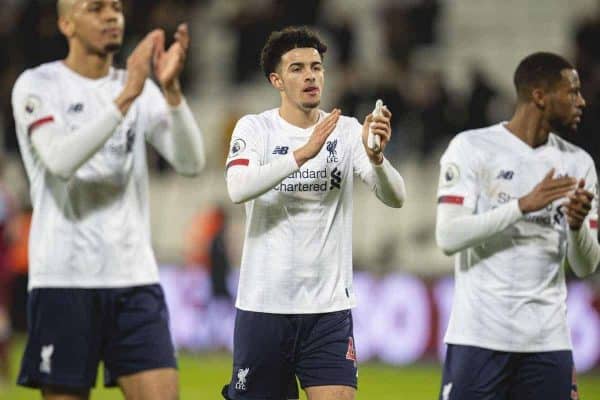 Stephen Warnock recalled to Sky Sports that after one academy game, Gerrard declared: “Jones had everything to become a top player. If his attitude is right, he’ll make it to the top.”

Jones certainly seems well-grounded and he knows what is expected of him. He told the Independent how he needs to ‘shine’ when he gets on the pitch and to ‘not be afraid of anything’ when speaking about his next step at Liverpool.

Without a shadow of a doubt, the 19-year-old is one of the most exciting midfielders to have come through the ranks at Anfield since Gerrard’s fated progression into the first team.

Jones has passed his first test at Anfield, his winning derby goal will have earned him indelible status, he just needs to build on the momentum and cement his place in the first-team squad to ensure he becomes more than a ‘one-goal wonder’.

The best academy graduates seized their chances at Liverpool often exploiting unprecedented situations to stake a claim in the first team, this will be Curtis Jones’ moment to shine.