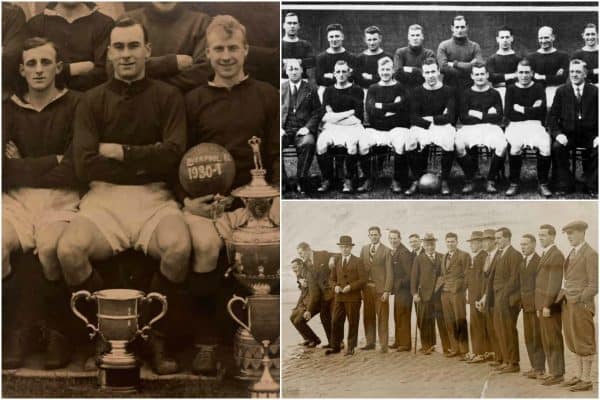 Liverpool Football Club was founded in 1892 and in the early 20th-century life as a Red was starkly different to that of present-day, as these amazing images show.

Unlike the all-conquering machine it is today, in the early 20th-century football offered little in the way of paid opportunities and two World Wars saw the game suspended.

Life outside of the sport presented its own unique set of challenges, but football, as it remains, was a form of escapism and an integral pillar of the local community.

Liverpool was home to an abundance of talented players from all walks of life, ones who helped shape and mould the club into what it is now.

This Is Anfield’s Jeff Goulding has done a wonderful job shining a light on some of ‘The Men Who Made Liverpool’ and, here, we take a trip back in time to the early 20th-century thanks to an incredible collection of images.

Liverpool 1920/21: Pictured with the Lancashire Cup and Liverpool Cup. A side managed by David Ashworth and with Harry Chambers leading the line, the Reds’ ninth all-time leading goalscorer (151).

A young Tom Bromilow who would go on to be Liverpool’s half-back for 11 years.

This is the first of the subsequent 24 photos courtesy of the Bromilow family.

Bromilow played for the Unity Presbyterian team as a youngster, he joined Liverpool at the end of the war in 1919.

Bromilow was a keen cricketer and enjoyed crown green bowling, as you can see from these amazing photos.

And the manager of the Reds at the time of the first triumph was David Ashworth, he led the club from 1919 to 1923.

Here, Bromilow is pictured alongside teammates Jock McNab, Walter Wadsworth and Jack Bamber in the 1920s.

Italy is the backdrop for an incredible photo of a pre-season tour in the 1920s, followed by the Liverpool squad taking a trip to the beach.

Jock McNab, Elisha Scott and Bromilow are all present.

A moment captured in time in front of the Kop in the same decade, with Ashworth, Elisha Scott, Bromilow, Wadsworth and Dick Forshaw all posing for a picture alongside their teammates.

An annual squad picture has been taken since time immemorial and they hold a special place in every club’s history.

And here is Gordon Hodgson, the third name in Liverpool’s all-time top goalscoring charts with 241.

The prolific striker was with Liverpool from 1925 to 1936, playing 377 games in that time, and is pictured alongside Bromilow and a cat.

The following images are certainly special and give a glimpse into Bromilow’s life away from Liverpool.

The first two are as hundreds gather for his wedding, followed by a lovely image of him with his children.

After his playing career with the Reds ended in 1930, Bromilow turned to management, where this incredible image was snapped.

It was whilst managing at Burnley, where he was captured crowded around a tactics board with his team.

Here is Elisha Scott in action for Northern Ireland, he played 468 games for Liverpool over a spell of 22 years. A fierce goalkeeper who was nicknamed ‘the Cat’ by supporters.

The next squad picture is from 1931/32, George Patterson was at the helm.

Next up is Jack Balmer, a Red who has cemented his name into the club’s and English football’s record books having scored a hat-trick of hat-tricks in 1946.

The following are portraits of some of Liverpool’s players in the early years.

Billy Liddell, one of Liverpool’s finest players. A former club captain and a prolific goalscorer who remains fourth in the club’s all-time goalscoring charts (228).

One of a handful of South African’s in Liverpool’s squad, Berry Nieuwenhuys signed for the Reds in 1933 and went on to play 257 games before he departed in 1947.

A popular and legendary figure and one who was also an ever-present in front of goal, Albert Stubbins scored 83 times in 178 games. A member of the club’s title-winning side in 1946/47.

Ronnie Moran, a loyal servant to Liverpool for 49 years, first as a youth player, then a first-team member, a captain, Boot Room member and caretaker manager. A club legend.

No one has scored more goals in league competition for Liverpool than Roger Hunt (244), a popular and key figure of Liverpool’s side who sits second in the all-time goalscoring charts behind only Ian Rush.

A humble genius who started life at Anfield in 1939, Bob Paisley would start life off the field as a physiotherapist before becoming reserve team coach and subsequently first-team trainer and manager, dedicating 44 years of his life to the Reds.

Laurie Hughes in 1949, a centre-half for Liverpool who was on the books for over 16 years.

Johnny Wheeler was an experienced head when he arrived at Liverpool in 1956 as a 28-year-old, a former club captain who played 177 games over a seven-year spell.

The final collection of images come courtesy of the Wadsworth family.

Walter Wadsworth was a ‘tough-tackling half-back’ in Liverpool’s famous 1920s side, he played 242 games for the Reds.

He’s seen here outside Hotel Moderne and with McNab and Bromilow.

Another cracking image of Elisha Scott in between the sticks for Liverpool, notably without gloves – which did not come into play until the late 1940s.

Finally, Wadsworth and the Liverpool team is seen here greeting King George in March 1920 ahead of the clash against Man City.

Where a couple of years later the Reds were celebrating their second successive league title in 1923, the fourth in the club’s history.

*Photos courtesy of the Bromilow and Wadsworth families. Images are provided exclusively to This Is Anfield, not to be republished.

* Photo courtesy of the Bromilow family.