Shrewsbury Town have had their ‘case’ against Liverpool for fielding their youngest-ever side in history dismissed by the FA, four months on from the fact.

You may be thinking ‘what case?’ But after Liverpool secured a memorable 1-0 win over Shrewsbury in February, with their youngest-ever side led by then Under-23s boss Neil Critchley, the League One side lodged a complaint, as per the Shropshire Star.

The FA Cup fourth-round replay came after a mix of experience and youth were held to a 2-2 draw in the first fixture.

And following a congested festive fixture list which saw Liverpool play 15 games in 53 days (a game every 3.5 days) across two different continents by the time the full-time whistle blew, Klopp said his team would “respect” the winter break during which the replay was scheduled to go ahead.

It, of course, led to widespread backlash from those looking to protect the FA Cup, but the boss had made a promise to his senior players and as such the club’s young guns would take the field without Klopp.

This formed the basis of Shrewsbury’s complaint as Klopp’s decision “ruined” the occasion at Anfield, and they felt Liverpool broke the rules by not fielding their strongest team – and as a result lost out on broadcast revenue as the game was not shown live.

It was a full-house at Anfield, however, despite the knowledge that the club’s young guns would take to the field – in the end, the starting XI had an average age of 19 years and 102 days.

And despite cries that Liverpool had tarnished the competition, the magic of the FA Cup was well and truly alive as the young Reds matched their senior opponents, who were unfortunate to concede in the manner they did.

It led to scenes of jubilation in the stands and from Liverpool’s young guns, who would no doubt dispute suggestions they “ruined” the League One side’s occasion.

And after seemingly being in no rush to hand down a decision on their case, the FA, unsurprisingly, cleared Liverpool four months after the game took place. 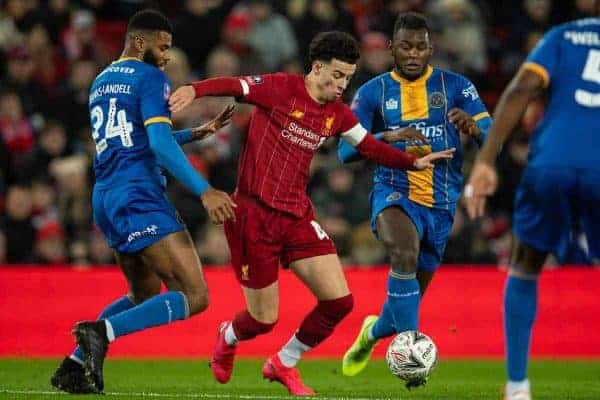 But Shrewsbury chief executive Brian Caldwell stood by his stance, writing in response: “In February we put a complaint in to the FA about the alleged rule breach but unfortunately and quite unexpectedly we were informed that this was dismissed last week (four months on).

“This without doubt resulted in a much lesser occasion for our players and fans as well as the financial reward that would have been expected from LFC playing their strongest team and abiding by the FA Cup rules.”

Ultimately, while you can empathise with the financial loss from the game not being televised live, Shrewsbury were still unable to overcome the underdogs in Liverpool’s youngest-ever assembled side to progress to the fifth-round.