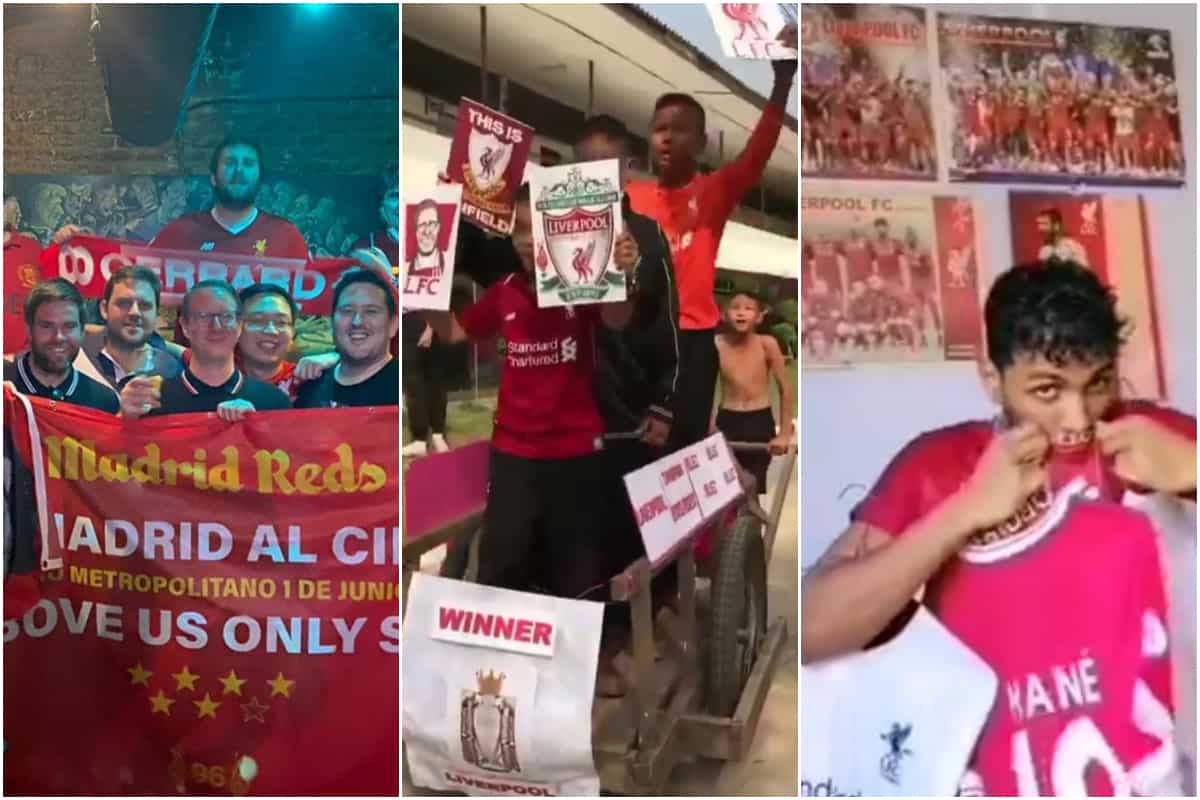 Liverpool fans the world over have been celebrating becoming Premier League champions—a party which has been decades in the making for patient supporters.

We’ve all seen the videos of the squad celebrating—a much-deserved party for those boys.

There have been plenty of images shown, too, of the scenes outside Anfield on Thursday night, as the Reds won the title without even being on the pitch.

But the delight and desire to celebrate has a far bigger reach when it comes to Liverpool, and fans across the entire globe have been indulging in releasing their emotions which have waited 30 years for this moment.

Of course, around the world doesn’t have to just mean thousands of miles away…Reds celebrated a title win from Bolton to Boston, and everywhere in between.

But somewhat further afield, cultures and countries are united by their love for the Reds, their awe of Anfield and their joy at becoming Premier League champions.

Plenty gathered in groups, from Spain to Nigeria, America to east Asia…

It doesn’t matter what you have and where you are…..it’s celebration day!! ??? pic.twitter.com/6OkdZnZ0AT

Others celebrated in their own unique way…

We've conquered all of Europe and we're never gonna stop… I have been waiting to write this for so long. 30 years of hurt. 30 years of sweat. 30 years of being made fun of because we were the club with zero Premier League titles. Well, not anymore. WE'RE THE CHAMPIONS, MY FRIEND!! ???? #ynwa #lfc #lfcfans #welivefootball #ynwagram #klopp #ju?rgenklopp #lfcfamily

Live from Salem, Massachusetts. How I wish I was at Anfield. ???? #Liverpoolchampions pic.twitter.com/Cpmn56AG6O

THE PARTY HAS JUST BEGUN! WE DANCING ALL WEEKEND!!! ?? CHAMPIONS OF ENGLAND, LIVERPOOL FC!!!!! YNWA pic.twitter.com/87zLpKKcNi

Dear @LFC fans,
Something really beautiful happened today. Our #LFC boys from Mangalore took up this great initiative of celebrating the our first PL title win in 30 years by feeding the needy and poor. They prepared and distributed 900 packets of food.@LFC @PeterMooreLFC(1/n) pic.twitter.com/s664xW6sVs

…and finally, one fan celebrated by producing a banner we’re very much looking forward to seeing on the Kop next season some time!

Liverpool FC, Champions of England, supported all over the world. Oh, we’re champions of that, too!