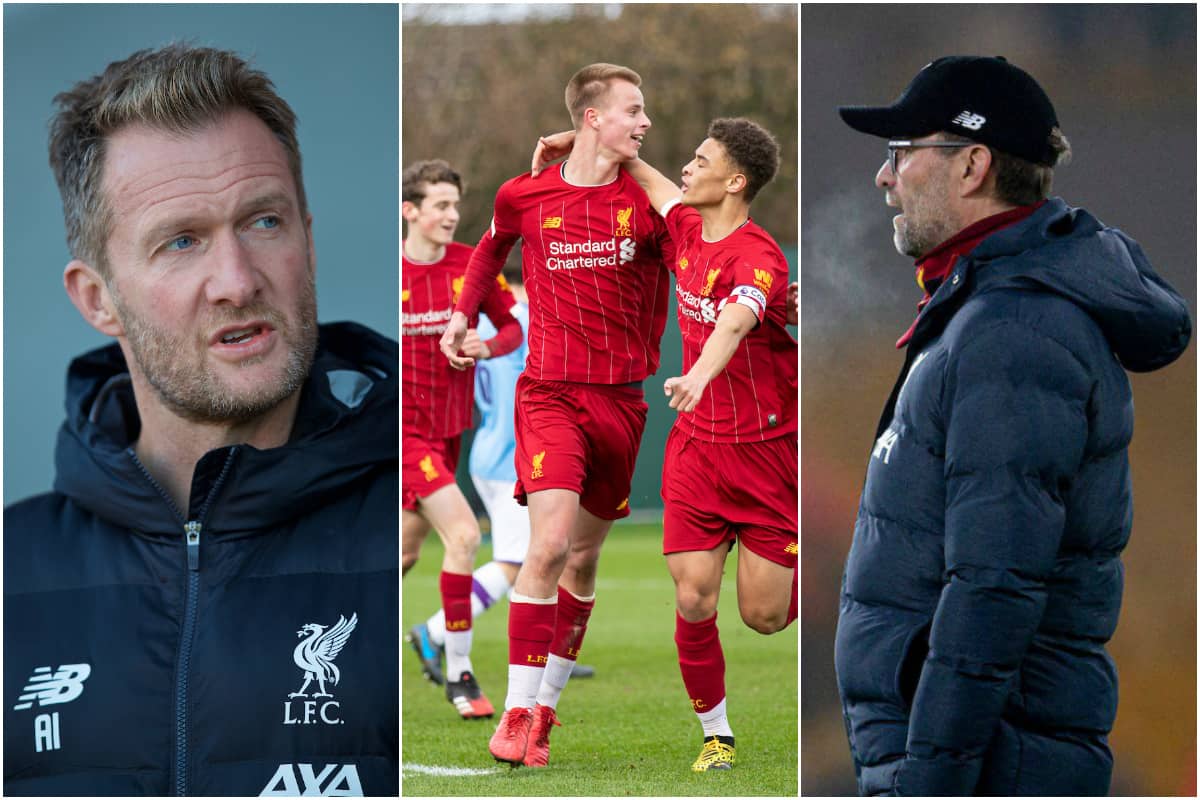 Liverpool academy manager Alex Inglethorpe has named the most important traits for young players, and explained how the club prepare them to impact on the first team.

The Reds have at times had a good conveyer belt of talent providing bodies for the senior side, and right now the formula is working perfectly.

There’s a clear path to the top, elite coaches are working at the academy and only the very best talents make the grade under the manager, Jurgen Klopp.

It means those competing for the next squad places, and even for places in the under-23s, have to be of the very highest calibre, which in turn means there’s enormous importance on the plan and processes employed which help the players realise their potential.

Speaking on the B/R Football Ranks podcast, Inglethorpe detailed the Reds’ process of preparing young talents for life at the top, including the eventual “audition” in front of Jurgen Klopp and the first team.

Having spent seven years on Merseyside now, Inglethorpe praise the “unique” nature of Liverpool as a city and highlighted how local talent is held in such high regard due to the connection with the people—as evidenced by the pride in having Trent Alexander-Arnold play such a key role in the team right now.

Liverpool, of course, have a very recognisable way of playing—and Inglethorpe says that approach, that identity, has to represent the people who come to watch them play:

“There is a style, there is a shape. I really enjoy watching the first team play and I think it’s the flexibility within their shape that is key.

“[You] have to be very careful that you don’t pin them down to a particular shape.

“They’ve been brought up on a rich diet of football which includes wanting the ball and wanting to attack. They want to see goals, they don’t want to be passive.

“I think the football has to represent the city. The city is built on hard work, it’s built on excitement and flair. I think the crowd dictate what style of football you play.”

That’s all well and good for the first team, but what about those Inglethope is responsible for? The youth teams, the schoolboys, the extremely young hopefuls?

As you might expect, it’s a gradual progression toward preparing them for first-team action and the eventual, all-important step up to training with the seniors.

“It’s about exploring the game. We wouldn’t expect them to counter-press, it’s nothing too serious.

“I’m just desperate that we’re not the ones that see them fall out of love with football. Keep their love and enjoyment for the game.

“As they get older, we have to prepare them for what’s to come.

“In the professional development phase, when they start getting towards 16, 17 years old and get to the youth team, we have got to do a very credible impression of how the first team try and play.

“But then finishing school is when they go to Melwood. There is no one better or more capable of getting them to play the way the first team do than Jurgen Klopp.

“That is the ultimate finishing school, when you’re coached by him.”

Klopp has shown, both in his team selections and his coaching appointments, that he is 100 percent on board with giving youngsters the chance to show their abilities.

It’s not only about the starting lineup or the subs for the odd cup game, but about a regular path to proving their worth.

Vitor Matos as a coaching conduit, the training ground move to Kirkby—all these factors are Klopp’s and the club’s ways of merging the football pathway and giving the youngsters the opportunity of a lifetime.

The academy boss, who cites being good learners and having mental resilience as among the key traits for the eventual top players to possess, reveals that those who get as far as the under-18s or under-23s for Liverpool will receive the stage to perform in front of Klopp.

And the job for his youth coaches is to ensure the players are ready to do their best when the moment comes.

“What we try and do is make sure there are no surprises when you get there,” Inglethorpe continued.

“You know you have to work hard, got to be humble, work for the team. Our job is to prepare them for that moment.

“Most of our boys will get one audition; some are lucky enough to get more. Most of the boys get one at some point and best that we can do is to prepare them for that.

“You’re trying to create habits. And when they get the call-ups to train with the first team, they have a solid foundation.”

As the likes of Neco Williams and Curtis Jones are busy proving right now, Inglethorpe and his team continue to do an excellent job in that regard.