Jurgen Klopp has promised Liverpool fans a trophy parade when it is deemed safe to do so, with Liverpool on the cusp of the Premier League title when play resumes.

The Reds could become champions as early as the first weekend of the top-flight restart, if Man City lose to Arsenal on the opening night and victory to sealed in the Merseyside derby.

It is more likely that the wait for the title stretches at least another week, with six points guaranteeing triumph, and Liverpool are steeled for as strong a start as possible.

But with mass gatherings no longer permitted, plans for a traditional trophy parade in the city have been scrapped for the time being.

Instead the Reds will celebrate within the current guidelines, before an organised event when public restrictions are lifted, with Klopp joining Jordan Henderson and chairman Tom Werner in pledging a parade.

“We will see. We will see how life is then,” he told BBC Radio 5 Live’s Football Daily, when asked how Liverpool will mark their expected title win within social distancing measures.

“At the moment, six people from two different households can meet again.

“In a couple of weeks, if it happens, we are still not the champions, we have to play football games and we have to win them.

“We don’t want to stop winning after two games, or whatever. They are difficult enough, our first three games are Everton, Crystal Palace and Man City, so I don’t see any results written in the stars already.

“We have to work really hard for that, and then hopefully it will work out.

“You always celebrate, wherever it is. The Champions League was first in Madrid, in the hotel, a lot of people around, you don’t find time for your family and stuff like this.

“If you want you can always find issues in the situation.

“If we will be champions, then whichever celebration is possible, we will do as a team, internally, and with all our supporters in the moment when it’s allowed to do so again.

“Then I can promise, if it happens, there will be a parade as well.

“Whenever, who cares! We only need one day when everybody is able to come and then we will do that.” 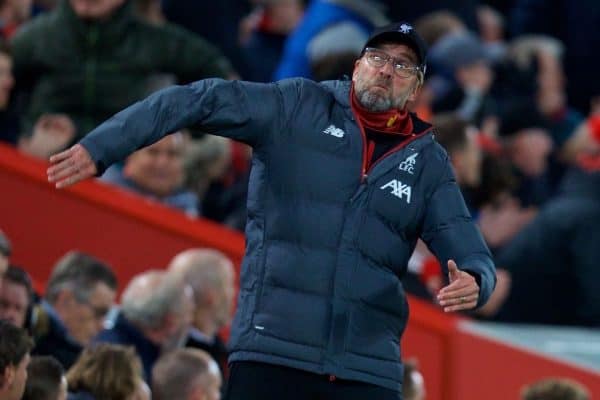 Klopp was asked about his trademark exuberance on the sidelines, and whether he would need to curb his natural instinct to celebrate given the situation.

But the Liverpool manager stressed that the Premier League “should be safe,” and insisted he would have no issues with avoiding contact with players and staff in these behind-closed-doors games.

“In Germany you saw this in the beginning. The first few goals they scored, important goals, they celebrated pretty normally. Nothing happened, they were still negative after that.

“If we create a safe environment where everyone is tested every few days and stuff like this, we will see if it is allowed then to celebrate more or less in the normal way or not.

“These football people, 11,000 people or whatever, get tested pretty much every second or third day, so we should be safe.

“We will see how we can celebrate if possible. But it’s not about me, I can pull myself together in these moments and will be very sensible.

“I will not be the reason for anything bad, but if it’s allowed maybe we will go a step further.