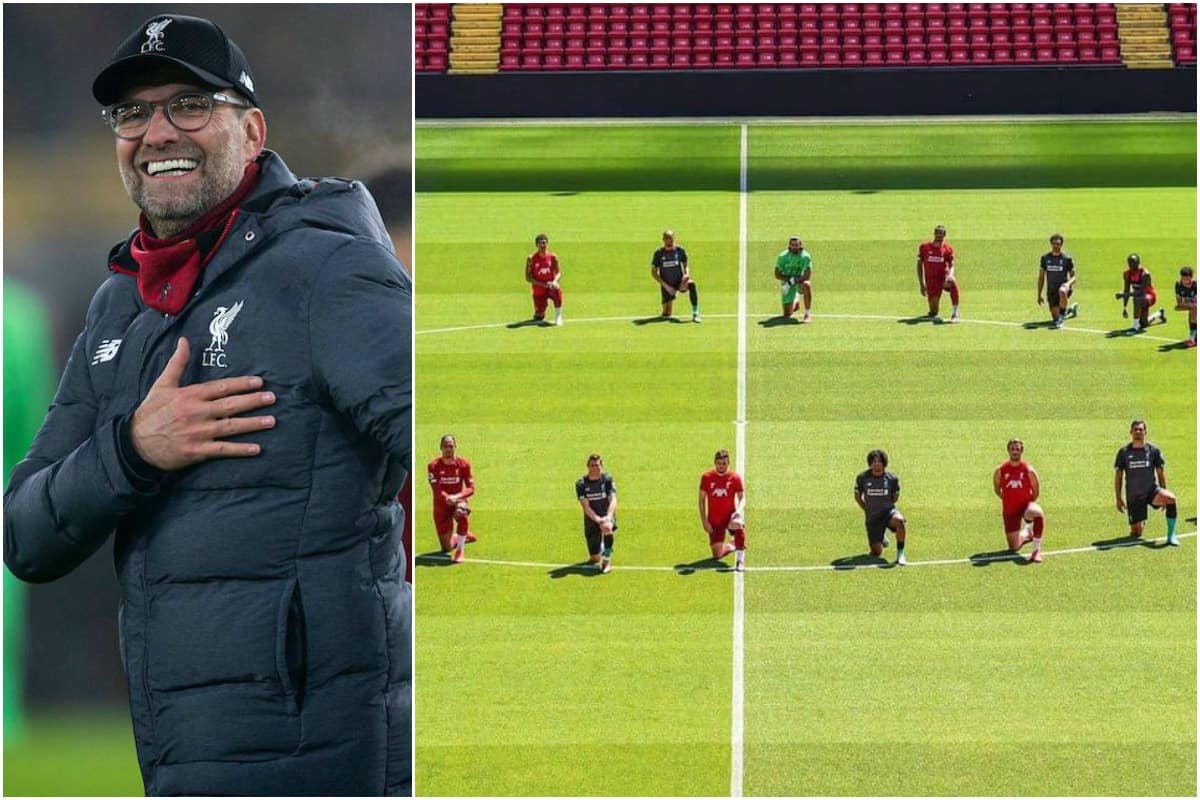 Jurgen Klopp has spoken of the “extraordinary moment” which saw his players take a knee in support for #BlackLivesMatter.

The senseless murder of African-American man George Floyd at the hands of Minneapolis police officer Derek Chauvin on May 25 has triggered a response both in the United States and across the world.

The news came over a week after Floyd was killed in custody after Chauvin pinned him to the ground with his knee to his neck for eight minutes and 46 seconds, leaving him unable to breathe.

On Monday, Liverpool’s first-team came out in support of the Black Lives Matter movement by taking a knee at Anfield, with every player sharing the image and the message that, “Unity is strength.”

Virgil van Dijk and Gini Wijnaldum were the driving force behind the Reds’ tribute and for Klopp, the spontaneous act was one which left him with a deeper sense of pride for his players.

“For us, dealing with each other and Black Lives Matter is very natural – especially if you look at our team: we have players from Africa, from England and so on with a corresponding background,” Klopp told German broadcaster Sky Sport.

“It is already so natural for us that at first, we didn’t even think about sending a message.

“But then the boys were struck. Then they spontaneously decided on this action.

“I’ve been very proud of the guys for a long time, but that was another extraordinary moment. When I saw them there and this picture was taken. Then I was really proud because it is also an important message.”

Last night our proud Indigenous players along with Archie Smith of African American descent, addressed the team about the impact current events have had on them.

This is how the team chose to show their support to their teammates, their families, and the Indigenous community. pic.twitter.com/Hiutgx4IVJ

As role models with a vast reach around the world, it was a welcome and important message to spread.

One which has seen sporting teams throughout the world similarly take a knee, from the Premier League, Bundesliga and all the way to the AFL in Australia – the message is clear: racial discrimination, or discrimination of any kind, has no place in our world.