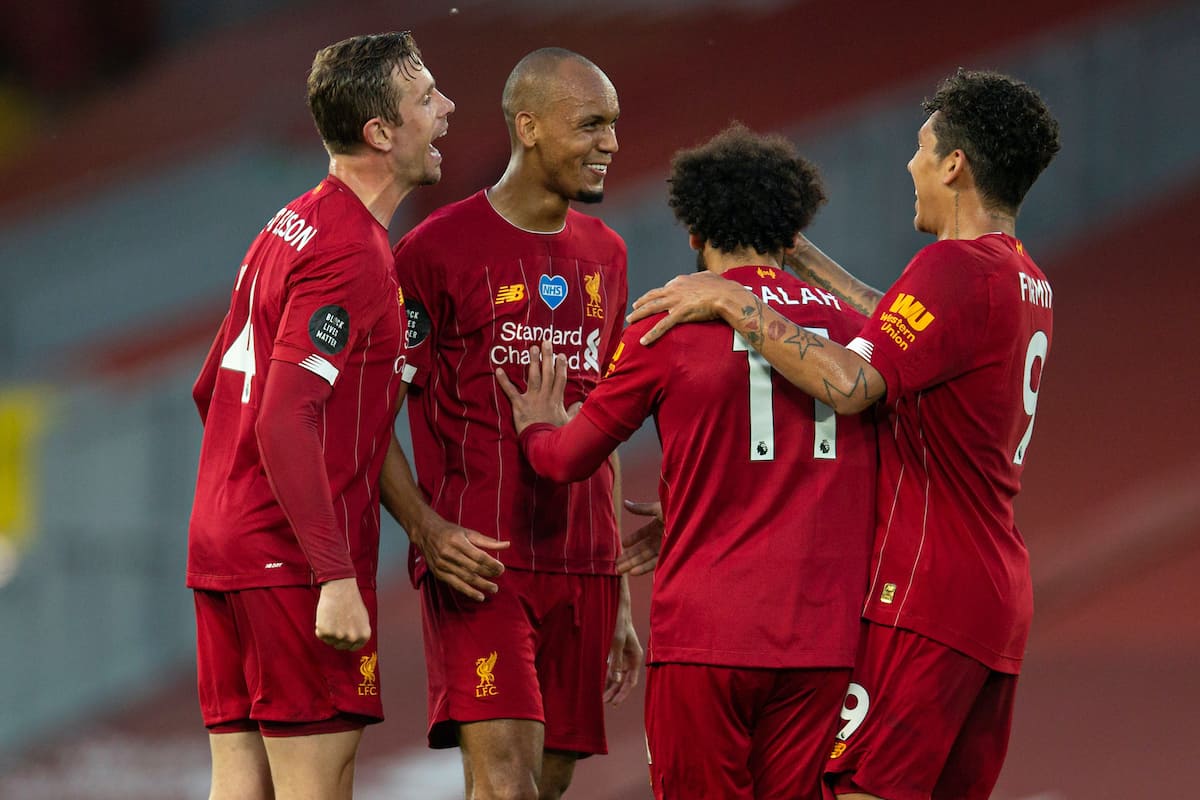 Liverpool blew away Crystal Palace with a 4-0 win at Anfield on Wednesday night, to put themselves within two points of the title, and perhaps one day from glory.

Unlike in the derby, Liverpool started with real fluency on their return to Anfield, with their one-touch play slick as every player looked to get on the ball early, almost resulting in a Gini Wijnaldum opener within the first eight minutes.

Palace were dealt a blow before the quarter-hour mark as Wilfried Zaha was forced off through injury, and soon after a brilliant long pass from Joe Gomez allowed Sadio Mane and Roberto Firmino to interchange and test Wayne Hennessey.

For all of the Reds’ brilliant buildup, the opening goal came from a set-piece, and it was perfect free-kick from Trent Alexander-Arnold, from a difficult area, that curled over the Palace wall and beyond the reach of Hennessey for 1-0.

Jordan Henderson then hammered the post on the volley, with Virgil van Dijk unable to turn home the rebound as Liverpool kept up the pressure against an increasingly deep away defence.

They had their second before the break, with a cracking pass over the top from Fabinho helping Mohamed Salah beat the offside trap, taking it down to power past Hennessey for a two-goal lead.

Liverpool opened the second half with the same bluster as they closed the first, with Andy Robertson blasting over from range after space opened up for him on his return to the side.

Fabinho, who was back to his best in the middle of the park, made no mistake when he found himself in a similar position minutes later, picking up the pass from the left-back and thundering a strike into the back of the net.

It was plain sailing from there, and Klopp used the opportunity to utilise his substitutes’ bench, first sending on Alex Oxlade-Chamberlain, and then Liverpool were 4-0 up as a sumptuous first-time pass from Salah saw Mane through to place it into the bottom corner.

An unassailable lead prompted a Premier League debut for Neco Williams, while Takumi Minamino came on in a more natural role than his right-wing berth in the derby, replacing Firmino as the No. 9.

The intensity didn’t drop, but perhaps there was an element of mercy on their hapless opponents as the Reds surged to an easy win.

It is one that takes Jurgen Klopp‘s side just two points from the title, but a failure to win for Man City away to Chelsea on Thursday night would clinch it without having to play another game.