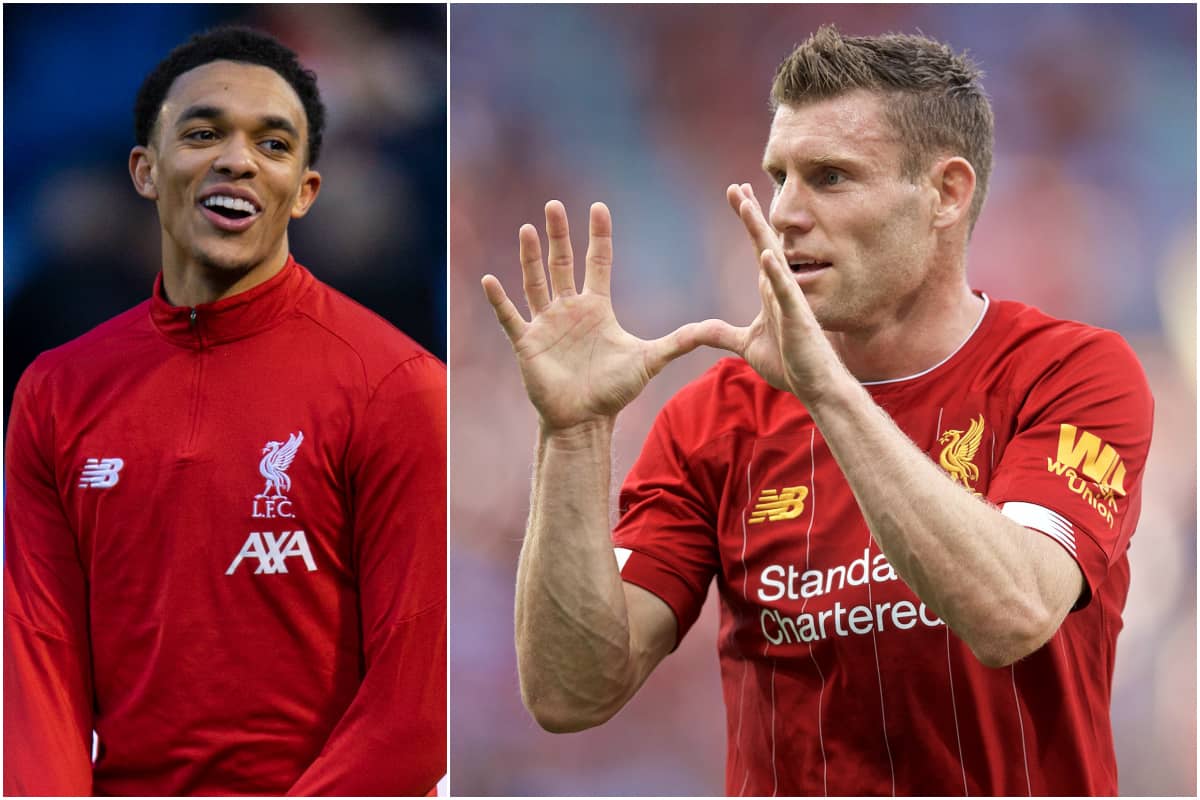 James Milner and Trent Alexander-Arnold were among those to reflect on a positive return to action at Anfield on Thursday, as Liverpool beat Blackburn 6-0 in a friendly.

The Reds were back for a full-sided game as Rovers made the 40-mile trip for a warmup clash, 10 days before the Merseyside derby at Goodison Park.

Having resumed contact training towards the end of May, this was the next step towards reaching full sharpness ahead of the Premier League restart, and it paid off handsomely.

Though it was a friendly against second-tier opposition—Blackburn sit 10th in the Championship—goals from Sadio Mane, Naby Keita, Takumi Minamino, Joel Matip, Ki-Jana Hoever and Leighton Clarkson made it a hugely productive afternoon.

Perhaps more importantly, it gave the Reds a taste of what to expect when they begin competitive games behind closed doors.

Milner conceded he was #missingthefans as he shared a rare photo of him nutmegging another player on social media, revelling in Liverpool’s comeback:

Makes a change for me to be putting it through someone else’s legs ?? Great to be back in red at Anfield #ilooksurprisedmyself #nutmegfacials #missingthefans ?

Meanwhile, Trent joked that it was “great playing in front of all my mates,” as the camera caught him taking a throw-in in front of a completely empty stand:

Great playing in front of all my mates ? pic.twitter.com/2P34DRigzT

For Virgil van Dijk and Gini Wijnaldum, it served as the perfect appetiser for the “real deal,” with the pair likely to start against Everton on June 21.

Wijnaldum sat out of the inter-squad friendly at Anfield at the start of the month, but was back as Mohamed Salah and Andy Robertson instead missed the rout as a precaution:

Great to get some of that match feeling again today ?? Getting into rhythm for the real deal ??? #PremierLeague #LFC

Mane also kept the countdown going as he celebrated another goal on home soil:

Neco Williams is expected to enjoy increased game time over the final nine fixtures, and the young right-back marked a return to “winning ways” after his stint filling in for Trent:

A goalscorer who received considerable praise from Jurgen Klopp in his post-match interview, Clarkson relished his cool finish and a socially distanced celebration:

Glad to be back out there today and grab a goal????#LFC @liverpoolfc

Watching from the sidelines, goalkeeping coach John Achterberg said it was a “good game to watch” as he saw Liverpool hit Blackburn for six:

Great to be back @LFC Anfield good game to watch 6-0 some nice goals !??? pic.twitter.com/0nb6zYtIoc

And elsewhere, Dejan Lovren reacted to Salah’s charitable act at a local petrol station by joking with the Egyptian King on Twitter, and vowing to do the same when he next fills up:

I heard that @MoSalah paid couple of days ago the gas for everyone on the petrol station…Great gesture ??

But can you pay at least once for me the coffee?? Usually you are tight guy so I am surprised, but anyway well done.

Next bill on the gas station is on me, whoever will be there. 60miles left ?

It is now just over a week until Liverpool are back on the pitch for the derby, on a night that could see them seal the Premier League title if the result goes their way in Man City‘s midweek clash with Arsenal.

Defeat for City—albeit an unlikely prospect after Arsenal‘s own 3-2 friendly loss to Brentford—would mean the Reds just need to beat Everton to secure the trophy.