The Premier League title is only the start for Liverpool, with Sadio Mane firm in his belief that “we won’t stop here.”

It has been an incredible and transformative two seasons for the Reds, with records continuing to tumble seemingly every game and four pieces of silverware added to the trophy cabinet.

But success is only the tip of the iceberg for Liverpool, with the road to the top both domestically and in Europe underpinned by years of hard work since Jurgen Klopp walked through the doors at Anfield in late 2015.

Not to mention heartbreak, and you needn’t look back far after missing out on the league title last season despite collecting 97 points.

And for Mane, who has notched 15 goals in 28 league games to date, the Reds’ ability to bounce back and to keep their dreams alive is what helped pave the way for such an “incredible moment” after Liverpool were crowned Premier League champions.

“It’s a special moment and a unique moment. It has been a long [time], waiting for the title, and finally, we got it and you can see how happy the players, the staff, the manager, [the people] around the club, all over the world the supporters are,” Mane told the club’s official website.

“It’s just an incredible moment and now we have to enjoy this moment and at the same time make sure we are ready for the next games. 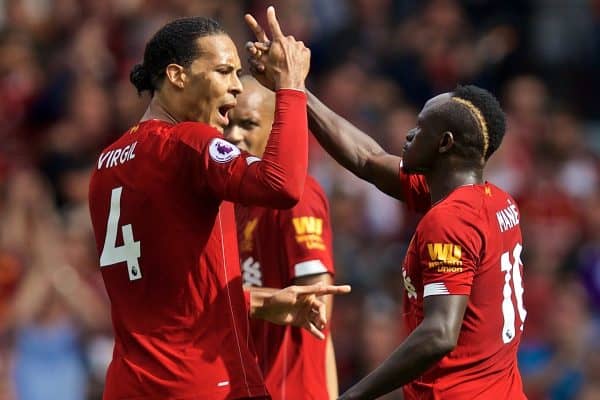 “I always say that dreams are allowed and for sure last year we went really, really close: one point, but at the same time I can say congratulations for City because they for sure deserved it and won it and that’s part of football.

“We showed this year great character and from the beginning, we have been really, really consistent, which is really important for the team who has a dream and the team who wants to win something.

“For sure we showed it from the beginning until the end and the gap was so big for us. It’s just an incredible moment for us.”

The league title was the latest, and most monumental, step in Klopp’s side writing their own history at the club and while emotions are high as players and fans alike live out their dream, there are still chapters to write for Mane and Co.

He added: “I think this is another step of all of us in our career for what we want to achieve because as football players you have to be always professional and always hungry in a good way to win everything.

“I think we have a great team, great staff and the club is amazing, so we have another step and big things to achieve so we won’t stop here.

“We just have to believe in ourselves still and keep working harder and be humble for sure – work hard and try to achieve bigger and bigger things with this club.”

And it starts against Man City on Thursday night, where the outgoing champions meet the new titleholders as Liverpool look to finish the season in style and carry momentum into 2020/21.

“Like I always said, we don’t have to stop and we won’t stop for sure after being champion,” Mane continued. “I think it’s another step of our careers and what we want to achieve so I can say for myself, it’s part of us and it’s the past now so we have to make sure we [carry on].

“Records in football are always there to beat so for sure we want to achieve again something special after being champion. It’s going to be a really, really good game [and] for us there are no excuses, we have to do everything possible to win it because now we have seven games.

“We are going to take it game by game and try to win all of them because it’s our dream and really important for us.”