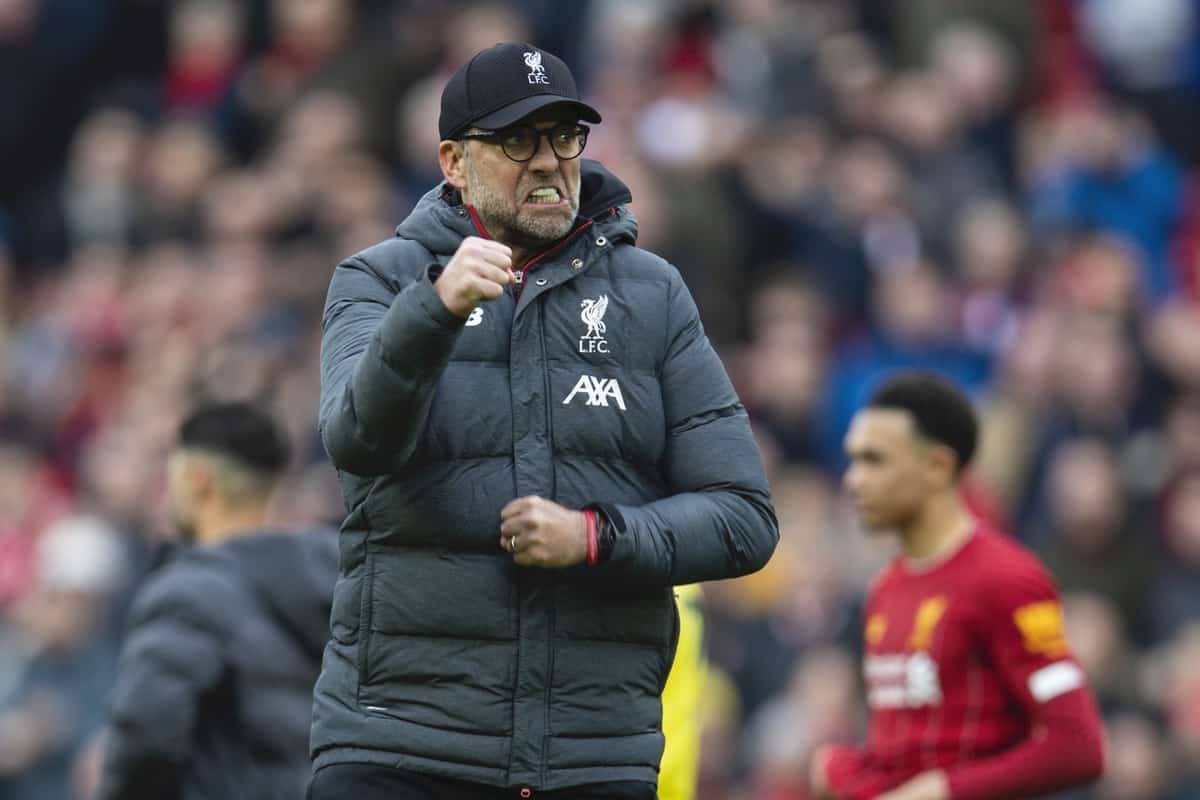 Jurgen Klopp has pinpointed the exact moment he, more or less, accepted that it was a case of when and not if that his side would be crowned Premier League champions.

The Reds’ name was etched on the Premier League trophy last Thursday, where after 31 games Klopp’s’ men had set an unassailable lead following Man City‘s defeat at Chelsea.

With just seven games remaining, Liverpool also comprehensively earned the crown for the earliest title triumph, albeit being in June, and have a number of records still in their sights.

But while the Reds had long had one hand on the title, for Klopp and Co. it was a case of moving from one game to the next and they mastered the art of deflection until it was no longer needed.

And the boss has never been short of praise for his side but he had remained tight-lipped over Liverpool’s procession to the trophy, even when holding a 25 point advantage over their closest rivals.

But with the red ribbons now officially set to adorn the trophy, Klopp has opened up on the specific moment reality started to sink in that his team were on the cusp of glory – and it came on the last league matchday before the lockdown, against Bournemouth, where the Reds then only needed six more points.

“I never thought that we will win the league until pretty late in this season, but [the fact] that we can win the league, obviously I learned last year,” Klopp told reporters.

“I knew as well that pretty much everything has to click with each other just because of the unbelievable strong opponent [Manchester City].

“Last year when we were seven, eight, nine points up, I knew we had a long way to go. Maybe I thought we could win the league at 60-70 minutes in the City-Leicester game [in May 2019] until [Vincent] Kompany finished my dreams!

“This year I had a moment when we won against Bournemouth and City lost against Manchester United. It was a big gap.

“I didn’t think we would win the league but it was a big gap and it felt quite good, but that is it pretty much.”

It was not official, however, until Liverpool had steamrolled Crystal Palace to the tune of 4-0 and City dropped points at Stamford Bridge, but the manner of the victory on their return to Anfield is when the penny officially dropped.

After falling agonisingly short the year prior, the Reds would now sit at the top of the mountain and Klopp couldn’t hide his pride over his team’s never say day attitude.

“The Palace game sums it up, sums us up,” Klopp added. “What these boys did, they did for the club, for the people and for what we stand for.

“Nobody was there. But we were still together. And it really sums us up. Because it is like they wear the Liverpool shirt in this moment and they go with all they have. Whenever, wherever, whichever time, whatever necessary, they go. And I love that.

“That is what made us a team, what brought us into the position we are in, it is all in this game; 86th minute, losing the ball, chasing it down, winning it back and shooting on the goal of Palace like you have never scored before. That desire, such desire.

“So that was exceptional, and it summed us up. That was the moment when I thought ‘yes, we will be champions. We are not yet but we will be’. It was the perfect moment.”