The campaign has come to an end for the majority of those who were loaned out in search of first-team experience during this most unique of seasons.

Only those plying their trade in the English leagues remain in action and four Reds featured over the weekend, with one missing out through injury.

It was another spell that saw the loanees flourish, as recent excellent form continued with some fine performances delivered—particularly from those in the Championship. 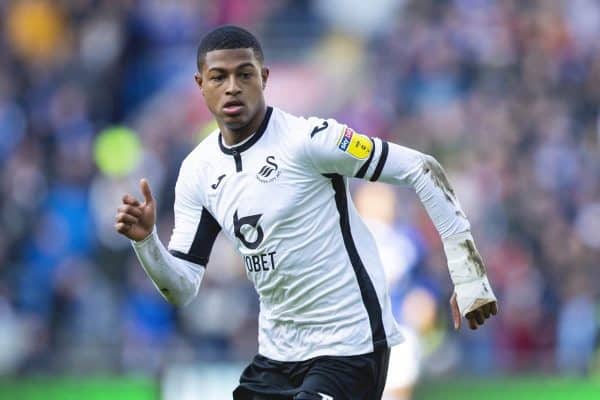 Once again, the star performer was Brewster, who has been enjoying a rich vein of goalscoring form since football resumed.

The 19-year-old netted his third goal in four games since the restart to inspire Swansea to a crucial 2-1 win against Sheffield Wednesday, which kept his side in the playoff hunt.

With 52 minutes played, Brewster put his side 1-0 up by smashing home on the half-volley inside the box after showing great strength initially to hold off his marker:

It's that young man Rhian Brewster again. The Liverpool loanee continues his goalscoring form for the Swans ??

That’s now seven Championship goals for the striker in just 15 appearances, making for an extremely impressive return on his first loan experience.

That Brewster is playing such a key role and producing decisive moments with regularity, under the pressure the business end of the season brings, provides real encouragement.

And it was that vital impact which saw WalesOnline’s Ian Mitchelmore laud Brewster’s match-winning influence, asking “where would Swansea be without the Liverpool loanee?”:

“Off target with a free-kick, and was barely given a sniff in the first half. But he took his goal brilliantly and was a constant menace in the second half. Should have netted a second late on.

“Where would Swansea be without the Liverpool loanee?”

Always happy to score but the 3 points is what really matters. Everything to play for… #YJB pic.twitter.com/jPOgAkyst7

A great afternoon ended on a sour note as Brewster was forced off with a shoulder injury, but boss Mike Cooper confirmed post-match that, thankfully, it is nothing serious.

All at Swansea will be relieved at that news, with their main man needed to deliver more decisive moments yet to keep dreams of promotion to the Premier League alive.

Also in fine form was Ejaria, who capped an excellent performance with a wonderful assist as Reading thrashed bottom side Luton Town 5-0.

The moment of magic came as Ejaria laid on the Royals’ third goal, scored by Yakou Meite, who netted four of Reading’s five strikes on the day with his own spectacular display.

A brilliant piece of play from the Liverpool loanee supplied Meite’s hat-trick effort on 35 minutes:

After picking the ball up outside the box, Ejaria turned brilliantly, cleverly evading the challenge, and threaded a defence-splitting pass to Meite who finished with aplomb.

A classy goal all-round came courtesy of the 22-year-old’s fifth assist of the campaign, adding to three goals from his 39 appearances in all competitions.

In contrast to the Championship Reds, Harry Wilson hasn’t quite managed to rediscover his best levels in the Premier League at Bournemouth.

The Wales international has started just one of four games the struggling Cherries have played since the resumption—that coming in the first fixture back, a 2-0 loss to Crystal Palace.

Wilson had to make do with another cameo outing on Saturday, as he featured only as a second-half sub in the 5-2 rout at Man United with the game already over.

A second season-ending injury for Kane…

An ankle injury in January appeared to have ended Kane’s first taste of Championship football at Hull City, before the three-month break gave him a chance to recover for the restart.

The midfielder, who was in good form before that blow, has picked up from where he left off since being available again—illustrated by two delightful free-kicks in a week.

Everything looked positive once more, but now, with the cruellest timing, Kane has been struck down with a second season-ending injury.

The box-to-box midfielder was forced off against Middlesbrough in midweek after scoring, and he sat out his side’s 4-2 loss at West Brom on Sunday.

Head Coach Grant McCann has confirmed that Herbie Kane will miss the rest of the season with the hamstring injury he suffered in last week's home win over Middlesbrough.#hcafc | #theTigers

Speaking to Hull’s official website after the loss, boss Grant McCann was “gutted” to announce the in-form midfielder has torn a tendon in his hamstring, thus ending his season:

“Herbie is going to be out for the rest for the season now.

“He’s torn a tendon in his hamstring, which we were really surprised about because Herbie himself thought he was okay when he came back into the training ground.

“But, looking at the scan, it’s not a nice one for him. We’re gutted for Herbie because he’s had no luck whatsoever since coming here.

“He picked up the injury in training when no-one was near him before lockdown and now he’s pulled a hamstring.”

It’s another cruel blow for Kane at a time he was proving his quality on the Championship stage, excelling along with Anfield team-mates Brewster and Ejaria.

A much more positive piece of injury news emerged on Friday, as Ben Woodburn made his long-awaited return to competitive action.

After seven months out, Woodburn finally made his competitive comeback as he started and played 55 minutes of Oxford United’s League One playoff first-leg draw at Portsmouth.

The 20-year-old’s comeback appearance was a quiet one, as the two sides played out a cagey 1-1 draw at Fratton Park.

It leaves it all to play for in the second leg and Woodburn will look to be the hero in that clash which takes place on Monday, live on Sky Sports, kicking off at 5pm.